The zoo tried a series of other materials to build a cart to keep the turtle’s shell elevated and still allow him to move naturally, said Dr. Ellen Bronson, the zoo’s director of animal health, conservation and research. 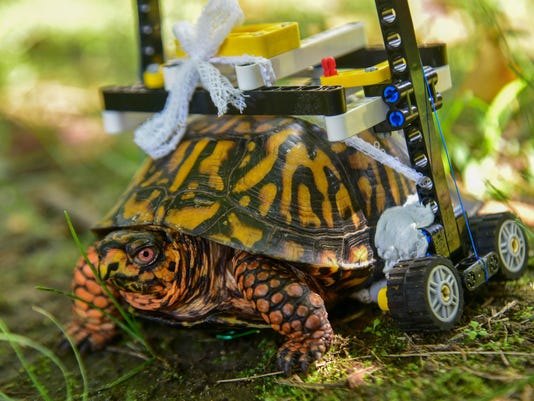 A wild Eastern box turtle at the Maryland Zoo in Baltimore is on the mend and on the move thanks to some clever engineering using Lego bricks.(Photo: Sinclair Miller / Maryland Zoo)

When a Maryland Zoo employee brought an injured turtle to the Druid Hill Park facility, veterinary staff crafted him a wheelchair from the building blocks of their childhood.

The wild Eastern box turtle, about the size of a grapefruit, arrived at the zoo’s hospital in July with severe fractures along the bottom of his shell, called the plastron.

The zoo’s veterinarians performed surgery to fix his shell, stabilizing it with metal plates, sewing clasps and surgical wire. But they were having trouble keeping the turtle’s shell off the ground so it could heal while also maintaining his mobility.

They tried a series of other materials to build a cart to keep the turtle’s shell elevated and still allow him to move naturally, said Dr. Ellen Bronson, the zoo’s director of animal health, conservation and research.

“We tried a few other versions of a cart to keep him elevated off of the ground, but they didn’t allow him to move as freely and well,” Bronson said in an email. “So we started to brainstorm other materials that would allow us to incorporate wheels so he could move around easier, and the idea of Legos came about.”

Lego to the rescue: The staff drafted some sketches of turtle-sized wheelchairs, and Garrett Fraess, a fourth-year veterinary student working at the zoo, sent the images to a Lego enthusiast friend.

The design was a hit, and a few weeks after his surgery, the turtle got his wheels.

A Lego frame surrounds the turtle and is attached to his upper shell with plumber’s putty.

If he makes a full recovery, the reptile will be released — without his wheels — where he was found in Druid Hill Park after he heals, which could take up to a year.

For the last two decades, the zoo has conducted an Eastern box turtle monitoring program in Druid Hill Park, where the organization tags and releases turtles to understand more about native turtle behavior in urban parks. Since 1996, the zoo has documented 132 turtles in the park. The injured turtle was originally tagged in 2000, according to the zoo.

The turtle is not on exhibit, but zoo visitors can see other Eastern box turtles in the zoo’s Maryland Wilderness area.