Inmates at York County Prison will soon have a new way to exchange non-legal mail with friends and family outside the prison, and officials hope the change will help eliminate contraband substances.

Keena Minifield and Chris Guido, both of York City, share their experience in working to stay in communication. during Guido's time in York County Prison. 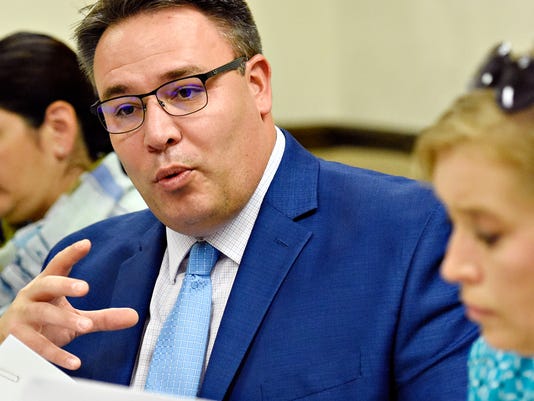 Inmates at the Springettsbury Township prison and their loved ones now will have to use an online messaging service to stay in contact.

On Wednesday, Sept. 19, the York County Commissioners voted 2-0 to approve a one-year contract with TextBehind, a Baltimore company that specializes in inmate communications. President Commissioner Susan Byrnes was absent.

The commissioners' vote was based on a recommendation by the York County Prison Board, which discussed the proposal at its Sept. 11 meeting.

"Protecting our employees and enhancing our security are the two big issues that have brought us to this point," said Doug Hoke, vice president commissioner and president of the prison board.

Interface: TextBehind users outside the prison will be able to send messages, pictures and digital cards to their incarcerated loved ones through the company's website or smartphone app. There's also a "doodle" function, designed with kids in mind, that allows them to send digital drawings.

At the prison board meeting, Warden Clair Doll said there would be no cost to the county to partner with TextBehind, and that costs to users outside the prison would be comparable to regular postage fees.

Doll suspended all incoming non-legal mail at the prison after an inmate overdosed on a suspected opiate the night of Tuesday, Sept. 4. Prison staff revived the inmate with naloxone, a Sept. 7 news release stated.

For nearly two weeks, beginning Aug. 29, the entire state prison system was locked down after dozens of people, including inmates and prison staff, fell seriously ill.

In a Sept. 10 news release, the state Department of Corrections said more than 50 staff members and 33 inmates were exposed to synthetic marijuana, also known as "K2" or "spice."

State Corrections Secretary John Wetzel told The Associated Press that authorities believe the liquefied drug was coming into facilities soaked into paper via letters or books, and inmates would then eat or smoke it.

Among changes being made at the state level are the elimination of mail-processing at prison facilities and a move to a third-party vendor to handle non-legal inmate mail.

Limiting exposure: Moving forward, all personal or non-legal mail sent to York County Prison will have to be processed through TextBehind, county spokesman Mark Walters said.

Hoke said this is to prevent the exposure of staff and inmates to potentially dangerous contraband substances through incoming mail.

Walters said that if non-legal mail is sent directly to the prison, staff at the prison will forward the mail to TextBehind so that it can be processed and delivered.

Inmates will still be able to send regular outgoing mail from the prison, he said.

Breaking down the costs: Prices vary across the country for TextBehind services, but users sending messages to inmates at York County Prison will be charged 50 cents per message, regardless of the sender's geographic location.

The price will be the same for all types of messages: text only, text with images, e-cards and doodles.

After users outside the prison send their digital messages to TextBehind, the company prints paper hard copies and mails them to the prison via the U.S. Postal Service.

When an inmate wants to reply to a message through TextBehind, the prison will mail the inmate's paper copy to the company, which will then digitize and upload the documents to the cloud and shred the originals for security purposes.

Inmates are not charged for TextBehind's services.

The TextBehind website says all messages will be delivered to the prison within 24 hours, but it includes a disclaimer that the prison mail room is ultimately responsible for delivering the mail to inmates.

Zia Rana, CEO of TextBehind, said in an email that the company was founded to connect family and friends, especially children, to their incarcerated loved ones consistently and conveniently while also protecting inmates and prison staff by eliminating contraband in inmate mail.

Rana said maintaining connections with family and friends is "very critical for the inmate’s psychological health and an important element in reducing recidivism."

The prison will not receive a commission from TextBehind the way it does with Global Tel Link, the facility's phone service provider.

Rana said commissions are not part of the company's model and are not offered to any prisons that use the service.

Outside users who prefer not to use the digital service can mail hard copies of letters, photographs or drawings to TextBehind, and the company will print photocopies to send to the prison, but Rana said digital messages are delivered more quickly.

Doll said at the Sept. 11 prison board meeting that once the contract was approved by the commissioners, it would take two or three weeks to get the system up and running.

Past communication issues: York County Prison came under scrutiny in September 2017 for its phone service contract with Global Tel Link, or GTL.

Editor's note: This report has been corrected to reflect the correct price of messages sent to York County Prison.