Hurricane Florence lumbered ashore in North Carolina with howling 90 mph winds and terrifying storm surge early Friday, ripping apart buildings and knocking out power to a half-million homes and businesses as it settled in for what could be a long and extraordinarily destructive drenching.

Amy Powell Johnson shares this video with USA TODAY Network of her garage floor, or what's left of it, after the Pungo River, Tooleys Creek, and the Atlantic Ocean pour through her street in Belhaven, NC. York Dispatch

Union Point Park is flooded with rising water from the Neuse and Trent Rivers in New Bern, N.C. Thursday, Sept. 13, 2018. Hurricane Florence already has inundated coastal streets with ocean water and left tens of thousands without power, and more is to come. (Gray Whitley/Sun Journal via AP)(Photo: Gray Whitley / AP)

WILMINGTON, N.C. – Hurricane Florence lumbered ashore in North Carolina with howling 90 mph winds and terrifying storm surge early Friday, ripping apart buildings and knocking out power to a half-million homes and businesses as it settled in for what could be a long and extraordinarily destructive drenching.

More than 60 people had to be pulled from a collapsing motel at the height of the storm, and many more who defied evacuation orders held out hope of being rescued. Pieces of torn-apart buildings flew through the air.

More ominously, forecasters said the onslaught would last for hours and hours because Florence was barely creeping along at 6 mph (9 kph) and still drawing energy from the ocean.

There were no immediate reports of any deaths.

Florence made landfall as a Category 1 hurricane at 7:15 a.m. at Wrightsville Beach, a few miles east of Wilmington, not far from the South Carolina line, coming ashore along a mostly boarded-up, emptied-out stretch of coastline.

Its storm surge and the prospect of 1 to 3½ feet of rain were considered a bigger threat than its winds, which dropped way down from a terrifying 140 mph – Category 4 – earlier in the week. Forecasters said catastrophic freshwater flooding is expected well inland over the next few days as Florence crawls across the Carolinas.

The National Hurricane Center said the storm will eventually push westward and make a right hook to the northeast over the southern Appalachians, moving into the mid-Atlantic region and New England as a tropical depression by the middle of next week.

Coastal streets in the Carolinas flowed with frothy ocean water, and at least 510,000 homes and businesses were without power, nearly all of them in North Carolina, according to poweroutage.us, which tracks the nation’s electrical grid. Alice Cooley and her husband, Calvin, of Bridgeton, N.C., wait in line for gasoline at the River Bend Fuel Mart on Saturday, Sept. 15, 2018, in River Bend, N.C. The Cooleys are without power and drove around Craven County looking for gasoline on Friday after Hurricane Florence caused widespread flooding and power outages. (Robert Willett/Raleigh News & Observer/TNS) Robert Willett / TNS
Fullscreen

Stephen Mims, left, and David Lloyd wait for the storm to pass in a shelter at Washington Street United Methodist Church as remnants of Florence slowly move across the East Coast Saturday, Sept. 15, 2018, in Columbia, S.C. With rivers rising toward record levels, thousands of people were ordered to evacuate for fear the next few days could bring the most destructive round of flooding in North Carolina history. (AP Photo/Sean Rayford) Sean Rayford / AP
Fullscreen 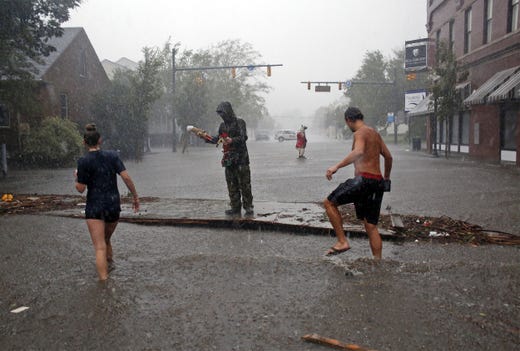 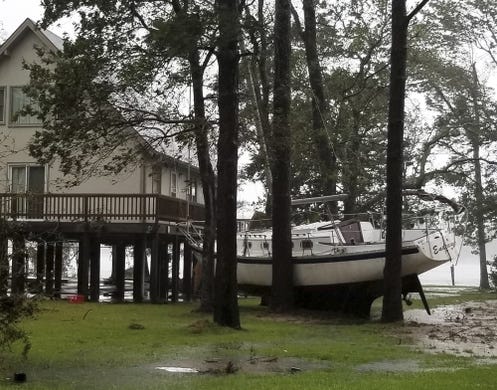 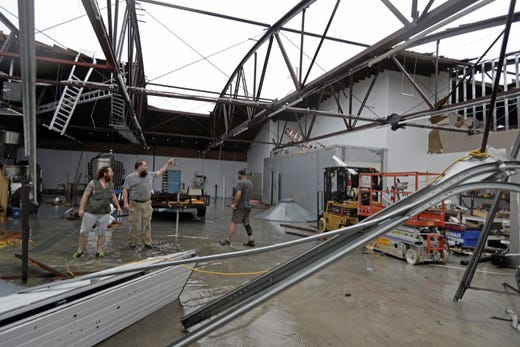 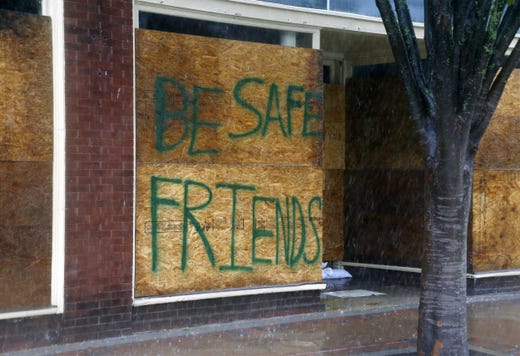 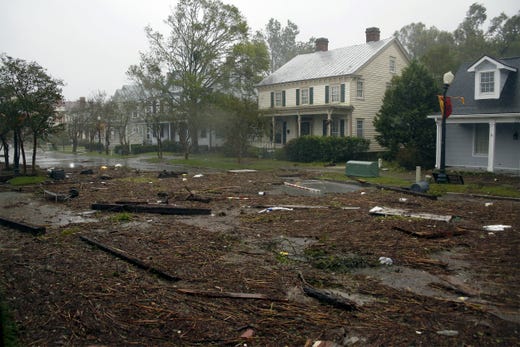 Raffi Hovsepian, a critical care paramedic with All County Ambulance, plugs in earbuds and tries to relax Friday morning, Sept. 14, 2018, in an old Kmart in Garner used as a makeshift shelter for first responders traveling to the state from other areas to wait for assignments to help with Hurricane Florence. Hovsepian travelled with a crew of four men from Ft. Pierce, Fla. (Juli Leonard/The News & Observer/TNS) TNS
Fullscreen 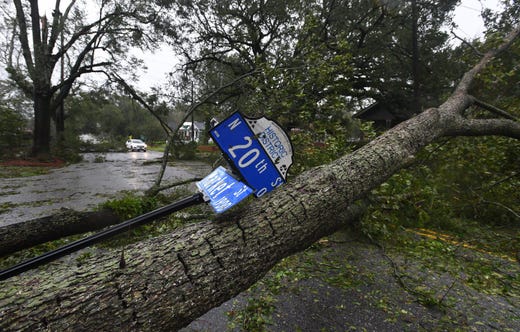 Russ Lewis looks for shells along the beach as Hurricane Florence approaches Myrtle Beach, S.C., Friday, Sept. 14, 2018. "I woke up this morning and couldn't hear the ocean. It's kind of spooky," said Lewis. "You don't expect to see the ocean this calm." (AP Photo/David Goldman) David Goldman / AP
Fullscreen

At 9 a.m., the center of Florence was wobbling about 20 miles (30 kilometers) southwest of Wilmington, its winds down to 85 mph (140 kmh), according to the hurricane center. Hurricane-force winds extended 80 miles (130 kilometers) from its center, and tropical-storm-force winds reached out 195 miles (315 kilometers).

Sheets of rain splattered against windows of a hotel before daybreak in Wilmington, where Sandie Orsa of Wilmington sat in a lobby lit by emergency lights after the power failed.

Forecasters said Florence’s surge could cover all but a sliver of the Carolina coast under as much as 11 feet (3.4 meters) of sea water.

The rising sea crept toward the two-story home of Tom Copeland, who lives on a spit of land surrounded by water in Swansboro.

The water “is as high as it’s ever been, and waves are breaking on my point, which is normally grass,” said Copeland, a freelance photographer for The Associated Press. “Trees are blowing down in the wind. Nothing’s hit the house yet, but it’s still blowing.”

In Jacksonville, next to Camp Lejeune, firefighters and police fought wind and rain as they went door-to-door to pull people out of the Triangle Motor Inn after the cinderblock structure began to crumble and the roof started to collapse.

The Wilmington airport had a wind gust clocked at 105 mph (169 kph), the highest since Hurricane Helene in 1958, the weather service said.

Farther up the coast, in New Bern, about 150 people waited to be rescued from flooding on the Neuse River, WXII-TV reported. The city said two Federal Emergency Management Agency teams were working on swift-water rescues, and more were on the way.

The worst of the storm’s fury had yet to reach coastal South Carolina, where emergency managers said it was not too late for people to get out.

“There is still time, but not a lot of time,” said Derrec Becker of the South Carolina Department of Emergency Management.

More than 12,000 people were in shelters in North Carolina and 400 in Virginia, where the forecast was less dire. Officials said some 1.7 million people in the Carolinas and Virginia were warned to evacuate, but it was unclear how many did. More than 3,000 inmates at North Carolina prisons and juvenile detention centers were moved out of the storm’s path.

Forecasters said that given the storm’s size and sluggish track, it could cause epic damage akin to what the Houston area saw during Hurricane Harvey just over a year ago, with floodwaters swamping homes and businesses and washing over industrial waste sites and hog-manure ponds.

Florence was seen as a major test for FEMA, which was heavily criticized as slow and unprepared last year for Hurricane Maria in Puerto Rico, where the storm was blamed for nearly 3,000 deaths in the desperate months that followed.

Hurricane Irma destroyed Kathy Griffin’s house in Florida last year, and it could be days before she finds out whether Florence smashed her fifth-story condominium in Wrightsville Beach, where authorities said utilities could be out for days or weeks.

“You can’t get over till we have power and we have sewer up and running,” said the retired teacher and real estate agent, who rode out the hurricane in an inland hotel.