Pennsylvania Gaming Control Board requires a local impact report as part of an application for a casino license. 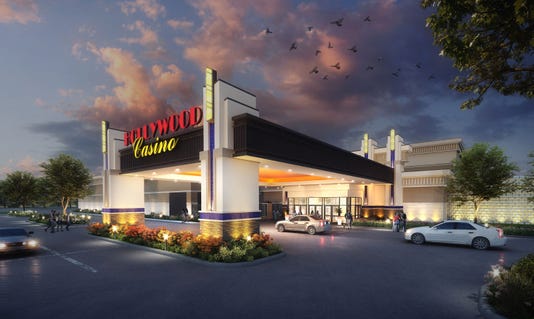 Penn National Gaming submitted its application to the Pennsylvania Gaming Control Board, including a rending of the proposed "Hollywood Casino York."(Photo: Submitted)

When state lawmakers expanded gambling in Pennsylvania last year, they created a new category of casino — the so-called “mini-casino.”

But when Penn National Gaming submitted the winning bid in January for the first of 10 licenses, it became clear that York County’s first casino might be “mini” in name only.

The Wyomissing-based company — which announced recently it had chosen the York Galleria mall for its future casino — paid $52.6 million, including license fee, for the opportunity to operate 750 slot machines and said it planned to pay another $2.5 million to operate 40 table games.

And if a “mini-casino” in Springettsbury Township were to generate full-size-casino problems, it would be up to the township police department to investigate all reports.

Pennsylvania State Police are required to maintain a presence at all casinos in the state — but last year’s gambling expansion legislation did not include the same requirement for the new category of casino. 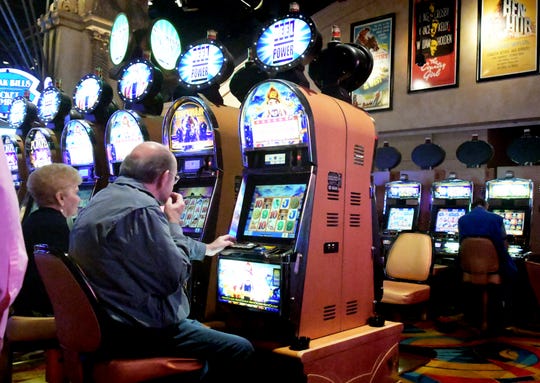 Patrons play slot machines at Hollywood Casino in Grantville, near Harrisburg, Friday, August 24, 2018. The casino is operated by Penn National Gaming, which may open a mini-casino in York County. Bill Kalina photo  (Photo: The York Dispatch)

Penn National submitted its plans Wednesday, Sept. 12, to the Pennsylvania Gaming Control Board for a license to operate the facility. If it’s approved, the company would place a category 4 casino on the first floor of the former Sears store.

The application must include a local impact report, according to Doug Harbach, communications director for the Pennsylvania Gaming Control Board.

That report is supposed to detail any “adverse impact on transportation, transit access, housing, water and sewer system, local police and emergency service capabilities, existing tourism, including historical and cultural resources or other municipal service or resource," he said.

Penn National hired Philadelphia-based Econsult Solutions Inc. to complete the report for the proposed York Galleria casino. The consultants found that neither Springettsbury Township Police nor York Area United Fire and Rescue would be impacted by it.

Springettsbury Township Police Chief Daniel Stump could not be reached for comment.

“The call volumes from month to month vary,” Springettsbury Township Manager Ben Marchant said. “The casino adding six or seven calls in a month won’t make a noticeable difference given the normal variation in call volume.”

"Based on other Penn National casino locations, we estimate an additional 1.4 EMS calls per month at the opening and 2.2 at max build-out," the report reveals. "Similar to fire services, this represents a 0.4 to 0.7 percent increase in EMS service demand."

Friday, August 24, 2018--Hollywood Casino in Grantville, near Harrisburg, is operated by Penn National Gaming, which may open a mini-casino in York County. Bill Kalina photo  (Photo: The York Dispatch)

Maj. George Bivens, director of the state police's Bureau of Gaming Enforcement, said crime statistics don’t “paint a picture” of what to expect at a casino.

“If you have a similar facility, similar attractions, you could probably expect a similar experience with criminal activity, but when the facility changes either larger or smaller, those statistics are going to be adjusted accordingly,” he explained.

Pennsylvania State Police reported 326 total crimes — a mix of violations of the Pennsylvania Crimes Code and the Title 4 Gaming Act — at Hollywood Casino in 2008, its first year of operation, Bivens said.

Most of the offenses — 202 — were larcenies, and the casino also generated a range of other crimes, including 19 disorderly conduct reports, 21 cases of forgery and counterfeiting, 15 assaults and 14 reports of drunkenness, according to the Pennsylvania Uniform Crime Reporting System.

Hollywood reported 666 total crimes in its second year of operation, state police reported, more than double the number of crimes investigated in 2008. The casino has 2,400 slot machines and 56 table games.

East Hanover Township does not have its own police department, and state police are responsible for investigating all crimes at the casino. 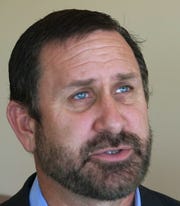 Sands Casino Resort Bethlehem has both a state police presence in the gaming area and the Bethlehem City Police Department, which handles the “adjacent shopping and parking areas,” he said.

Sands opened in 2009. That year, state police reported 263 offenses, including 185 larcenies, 28 cases of forgery and counterfeiting and 10 assaults.

Crime at Sands more than doubled in its second year, when 672 offenses were reported according to state police. The casino has 3,000 slot machines and 200 table games.

Valley Forge and Lady Luck, the closest in size to the proposed Hollywood Casino York, reported crimes in line with those the Penn National's consultant predicted for the Springettsbury Township facility.

Lady Luck's first year in 2013 had 23 reported crimes, such as forgery, theft and drunkenness. Crimes at the western Pennsylvania casino doubled in its second year to 56, state police reported.

Valley Forge, near Philadelphia, opened in 2012, reporting 87 offenses. Those increased to 133 the next year, according to state police.

“The casinos as a whole do a good job at keeping crime at a low level,” Bivens said. “There is a very low tolerance level, and security acts quickly when anything suspicious is occurring. The bottom line is they want a safe environment there for the people coming to play.”

Private security: State Rep. Kristin Phillips-Hill, R-York Township and a member of the House Gaming Oversight Committee, emphasized that the Pennsylvania Gaming Control Board “cannot require the state police to maintain a permanent office in a mini-casino.”

“Regular casinos have a Pennsylvania State Police office in them, the merits of which have been debated,” the York Township Republican said. “This debate centers around the fact that while PSP has an office in each regular casino, PSP’s officers don’t constantly patrol the casino; the private security does.” 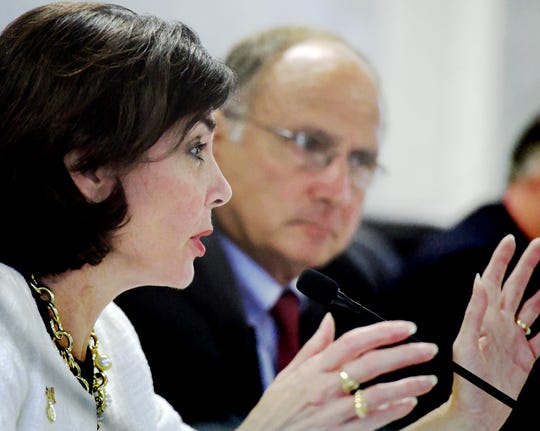 The state gaming control board, she said, requires mini-casinos to have private security.

“If something criminal occurs at the casino, PSP or local police would be notified,” Phillips-Hill said. “As with the current casinos, security is primarily the responsibility of the casino, and they would be fined heavily by the PGCB if they don’t provide adequate security.”

If the state approves Penn National’s license application, Springettsbury and York County would receive “local share revenue from taxes levied on the casino,” the lawmaker said. A portion of that money is “intended to pay for any increased costs incurred by the host municipality for law enforcement or other emergency services due to the casino,” she added.

Springettsbury will receive 2 percent of gross tax revenue on slot machines and 1 percent from table games. Marchant wouldn’t speculate about how much he thinks the municipality would receive or how the township would spend it.

“The township police department maintains a strong level of service and will have plenty of capacity to respond to these additional calls,” he said. “I have no reason to question the accuracy of the study procured by Penn National Gaming to evaluate the impacts of the proposed casino on Springettsbury Township’s resources and infrastructure.”

“Ensuring public safety is always a top priority in Springettsbury Township, and I have complete confidence in our police force’s ability and resources to handle the expected service calls,” he said.

Redevelopment is at the heart of what the York Galleria needs, he said, and a “mini-casino in that location will be an economic boost” for it and surrounding businesses.

“The economic impact should be such that the township can undertake much-needed traffic and road infrastructure improvements throughout the township without adding significant tax burdens on our residents,” Dvoryak said.

Transportation Resource Group, commissioned to conduct a township traffic study, noted that there will be  “3,753 additional trips” daily and “5,518 additional trips on Saturdays.” The current daily traffic “on roads adjacent to the York Galleria ranges from 5,700 on Pleasant Valley road to 16,500 on Memory Lane,” the ESI report stated.

“Some of the new traffic added is expected to be offset by the closures of two of the Galleria's anchor stores, the Bon-Ton and Sears," according to the ESI report.

Infrastructure upgrades would be needed, at $97,750, to improve the Whiteford Road and York Galleria southwest driveway and to optimize traffic signal timings at Mount Zion Road at both Whiteford Road and Pleasant Valley Road intersections, the report says.

Water and sewer improvements also are necessary and are estimated to cost $251,830, ESI reported.

Next steps: Once the application is finalized, it will then go to the Bureau of Investigations and Enforcement to complete a background report, Harbach said. A public input hearing will be scheduled in Springettsbury to “collect additional evidentiary material,” he explained.

When all parties have had an opportunity to supply their points of view to the state gaming board, then a public vote will be cast either in favor or against the mini-casino’s license, Harbach said.

Mini-casino licenses are new, which makes it “difficult to pinpoint” how long the process is going to take, he continued, but added, it will be a “number of months.”

“There will likely be more of a discussion on the process, including how soon a hearing would be held over the next couple of days as the board meets here in Harrisburg,” Harbach explained.

A license is good for five years, and the state board considers renewal for an additional five years, he noted.

“We believe the York Galleria mall, which is a well-known retail destination in York County, is an ideal site for our planned Hollywood Casino York,” said Timothy J. Wilmott, chief executive officer for Penn National Gaming.

“We explored numerous other potential opportunities within York County, but the mall’s convenient location, existing infrastructure and ample parking, as well as the support of Springettsbury Township officials and the local business community, helped cement our decision,” he said.

The only Springettsbury Township supervisor who opposed hosting a casino said she still believes the York Galleria is not the right fit for gambling.

“I feel Springettsbury Township is a family-oriented community, and we do not need a mini casino,” Supervisor Kathleen Phan said.