President Donald Trump inaccurately claimed the strongest economic record ever as he capped a week featuring varied misrepresentations from the White House and in hearings for his Supreme Court nominee. 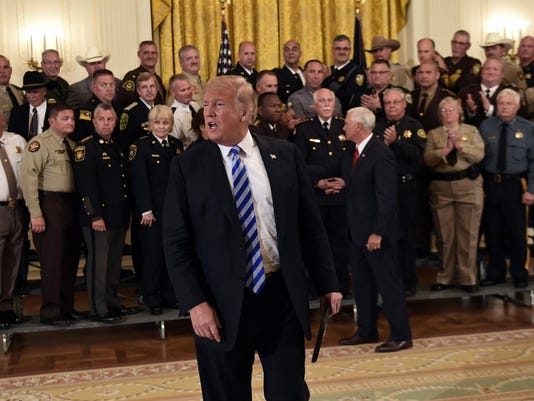 In this Sept. 5, 2018, photo, President Donald Trump responds to a reporters question during an event with sheriffs in the East Room of the White House in Washington. (AP Photo/Susan Walsh)(Photo: Susan Walsh / AP)

WASHINGTON – President Donald Trump inaccurately claimed the strongest economic record ever as he capped a week featuring varied misrepresentations from the White House and in hearings for his Supreme Court nominee.

A look at recent rhetoric and how it compares with the facts:

THE FACTS: The economy, though healthy, has been in better shape at many times in the past.

Growth reached 4.2 percent at an annual rate in the second quarter. That’s the best in the past four years. So far, the economy is growing at a modest rate compared with previous economic expansions. In the late 1990s, growth topped 4 percent for four straight years, from 1997 through 2000. In the 1980s expansion, growth even reached 7.2 percent in 1984.

The unemployment rate of 3.9 percent is strong but it’s not at the best point ever. It is near an 18-year low. The all-time low came in 1953, when unemployment fell to 2.5 percent during the Korean War. Meanwhile, a greater percentage of Americans held jobs in 2000 than now.

TRUMP: “Isn’t it a shame that someone can write an article or book, totally make up stories and form a picture of a person that is literally the exact opposite of the fact, and get away with it without retribution or cost. Don’t know why Washington politicians don’t change libel laws?” – tweet Wednesday.

TRUMP, addressing GOP Sens. John Thune and Mike Rounds of South Dakota: “We have lousy libel laws… ‘Hey Mike and John, could you do me a favor? Create some libel laws, that when people say stuff bad about you, you can sue them and if you’re right, you win.’” – remarks Friday at fundraising event in South Dakota.

THE FACTS: He misstates libel law in claiming that someone can “totally make up stories” or freely write “fake news” without penalty.

Under defamation laws, people can bring a lawsuit for slander or libel if they believe someone’s statements have injured their reputation. For public officials such as Trump, they must meet a higher legal bar than ordinary people due to First Amendment guarantees of a free press and show the statements were made with “actual malice.” That means a publication is at risk by acting with reckless disregard for the truth.

Trump often pledges to make it easier for people to sue for defamation, typically after the publication of books or news articles that present an unflattering portrait of the White House. But he has little influence to change the laws.

Libel laws are set at the state level, which the president and Congress do not have authority to change. Any attempt to loosen the laws would likely run afoul of the First Amendment, barring a successful Supreme Court challenge or constitutional amendment.

TRUMP, questioning whether one of his senior officials acted illegally about an administration effort to thwart his agenda: “TREASON?” – tweet Wednesday.

THE FACTS: Not treason. The official who wrote anonymously in The New York Times about the “quiet resistance” against Trump is surely disloyal to the president but not a traitor in the legal sense.

Treason occurs when a U.S. citizen, or a noncitizen on U.S. territory, wages war against the country or provides material support, not just sympathy, to a declared enemy of the United States.

For instance, in the Cold War case of Julius and Ethel Rosenberg, who were executed for giving atomic secrets to Russia, the Rosenbergs were convicted of espionage, not treason, because the U.S. and Russia were not officially at war. No one has been convicted of treason since the aftermath of World War II, few have been through history and no one has been executed for that crime, says Carlton F.W. Larson, a University of California law professor who has a book coming on treason.

In 2006, the Bush administration brought a treason indictment against Adam Gadahn, an American who authorities say became an operative and spokesman for al-Qaida abroad. The Obama administration said he was killed in a 2015 counterterrorism operation in the Pakistan-Afghanistan border region.

Treason is addressed in the Constitution as part of an effort by the framers to prevent the government from using it as a reason to suppress political speech, said J. Richard Broughton, associate dean at University of Detroit Mercy and a member of the Republican National Lawyers Association. Congress has little if any power to change the definition and the executive branch can only bring charges in extremely limited cases.

Trump’s opponents have used “treason” loosely as the special counsel investigates contacts between the Trump campaign and Russia, and it is thrown around widely in the public discourse by all sides.

DEMOCRATIC SEN. AMY KLOBUCHAR of Minnesota, asking about Supreme Court nominee Brett Kavanaugh’s views on the scope of a president’s executive power: “I’m asking about your position that you stated in this law review article that a president should be not subject to investigations while in office. You’re only saying that they should be subject to investigation as part of an impeachment (proceeding by Congress) and that there’s no other investigation that could occur? Is that fair?” – Senate hearing Wednesday.

KAVANAUGH: “No. … On criminal investigation and prosecution, I did not take a position on the constitutionality. Period.”

THE FACTS: His claim is highly questionable, based on his past writings.

In a 2009 Minnesota Law Review article, Kavanaugh cast doubt on whether a president should be subject to what he described as “time-consuming” criminal investigations, cautioning that it could distract the nation’s chief executive from doing the job. He wrote in a footnote that “a serious constitutional question exists regarding whether a President can be criminally indicted and tried while in office.”

Special counsel Robert Mueller has been investigating whether the Trump campaign coordinated with Russia during the 2016 campaign to tip the election in his favor, and whether Trump obstructed justice such as by firing FBI director James Comey.

DEMOCRATIC SEN. DIANNE FEINSTEIN of California: “In the 1950s and 60s, the two decades before Roe, deaths from illegal abortions in this country ran between 200,000 and 1.2 million. That’s according to the Guttmacher Institute.” – Senate hearing Wednesday.

THE FACTS: That’s wrong, and she corrected herself Friday. Known deaths from illegal abortion were much smaller. The California senator conflated the estimated number of women who had an illegal abortion with the number who died from it, according to the research she cites.

The Guttmacher Institute, which supports abortion rights, cites estimates in a 2003 report that 200,000 to 1.2 million illegal abortions were performed in the 1950s and 1960s in the U.S. The report says the number of deaths from illegal abortion dropped from just under 1,700 in 1940 to just over 300 by 1950 and a little under 200 by 1965. The Supreme Court established a constitutional right to abortion in the 1973 Roe v. Wade decision.

TRUMP ATTORNEY RUDY GIULIANI, citing a “60 day run-up to 2018 elections”: “If Mueller wants to show he’s not partisan, then issue a report on collusion and obstruction. They will show President Trump did nothing wrong.” – tweet Aug. 25.

THE FACTS: He’s wrong in suggesting there is a 60-day cutoff date before the Nov. 6 midterm elections, which came Friday, for Mueller to wrap up the Russia investigation.

Trump and his allies including Giulani often cite a Justice Department policy on the issue. But in fact, no written policy setting a deadline exists and Mueller can continue the probe and issue new indictments. He also has no time constraints regarding finishing or releasing the findings of his investigation.

The only thing that’s changed is that Labor Day kicked off high election season in the battle for control of the House and Senate. So any action by Mueller between now and the Nov. 6 voting risks being seen as an effort to affect the outcome.

The Justice Department does have guidelines about investigations in advance of an election, which have been interpreted over the past decade to mean that investigators, if possible, should avoid taking specific actions – such as indicting candidates or raiding their office – in the run-up to an election.

“Law enforcement officers and prosecutors may never select the timing of investigative steps or criminal charges for the purpose of affecting any election, or for the purpose of giving an advantage or disadvantage to any candidate or political party,” one such memo from 2012 states.

But the policy does not impose a specific cutoff date for investigations before an election.