"It's just one of my favorite memories about growing up in York," she said. 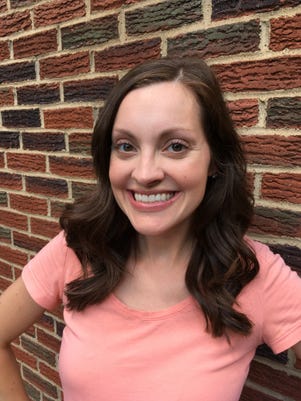 For Anne Pavlick Van Eman, the York Fair was always a tradition.

"It's the kickoff of the fall season," she said, recalling the familiar comfort of walking through the fairgrounds, with strong smells of pumpkin and fall florals.

Born and raised in Springettsbury Township, Van Eman lived in York County until she graduated from York Suburban High School in 2004. When she lived here, the fair was something she and her family almost never missed.

Now in South Park Township, Allegheny County, with three kids and a baby boy on the way — due the same time as the fair's run Sept. 7-16 — she knew she couldn't make it this year.

So Van Eman turned to her newfound hobby to give her the same sense of nostalgia.

Van Eman started a YouTube cooking channel on her birthday, July 26, called Anne's Family Recipe — to share not only recipes her family made, but the ones they loved eating.

Those included several of her York Fair favorites.

Remembering with food: "The most important thing for me was to get that orangeade," Van Eman said of her fair days.

Though longtime vendor Kohr's is no longer at the fair, Van Eman remembers it as a unique staple and plans to honor the memory, joking, "my video now is a tribute to the late, great orangeade!"

More: Manager: Moving York Fair to summer could be 'catalyst'

She also has fond memories from middle school of going to Stoltzfus, under the grandstand, which sold Pennsylvania Dutch foods, including the corn soup and ham and Swiss sandwiches.

In fact, when asked about her favorite fair food, she recalls her French teacher teasing her when she said ham and cheese — not the first thing that usually comes to mind.

But the sandwiches made an impression on Van Eman and her family, who would buy half a dozen to take home and eat all weekend.

The Old West cinnamon buns were always served in giant sizes, with a scoop of butter on top — and nothing wrong with that, she joked.

This treat is also extra special for Van Eman because it's a return to another pastime — making her own cinnamon rolls at her business Nice Buns Home Bakery, which she had for two summers at the farmers market when she lived in New Castle, Lawrence County.

She hopes the mini fair food series will be the first of many for her budding project.

Anne's Family Recipe: The idea combined her love of food with a longtime passion for performing and the need for a new outlet since becoming a stay-at-home mom.

Van Eman enjoyed watching YouTube videos on everything from tips on cooking for kids to beauty and crafts, and in her early 20s, she submitted a video for "Next Food Network Star" in the hopes of one day hosting her own cooking show.

"I like to say that I'm Food Network trained," she joked, noting that watching the TV station is where she got a lot of ideas and expertise.

Van Eman opted for a free, creative platform with room to grow to start her show, and an opportunity to share family recipes, such as her Italian-American mother-in-law's homemade bread and pepperoni rolls.

In one video, Van Eman shares a Texas sheet cake recipe from a longtime family friend, including an appearance from her three taste-testers — kids Jack, 6, Emma, 4, and Benjamin,1.

Starting with a simple setup of a camcorder and microphone, and her husband, Sean, directing, producing and providing technical work and background music, she hopes to expand as the project grows and invest in more equipment.

Since the channel is so new, Van Eman only has 169 subscribers, but she said she's excited that many of them are people she doesn't know.

She enjoys connecting with others who share a common interest, she said, and appreciates that there's always room for another cooking show because everyone has different tastes.

With her York Fair treats, Van Eman said she hopes to share what she loves so much about the annual gathering. 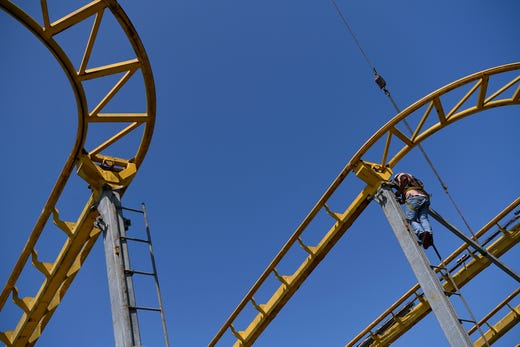 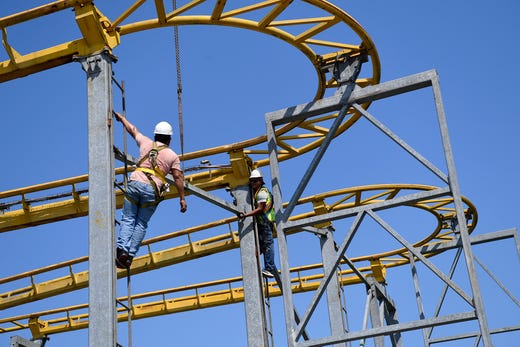 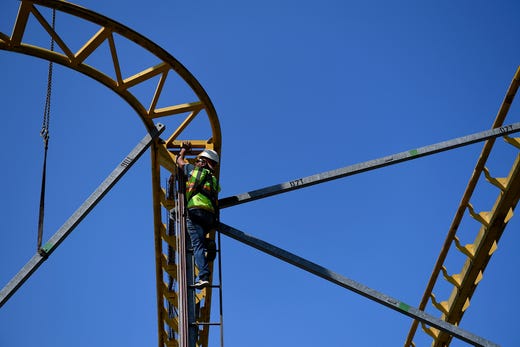 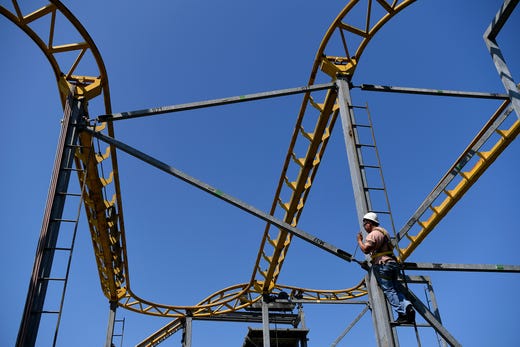 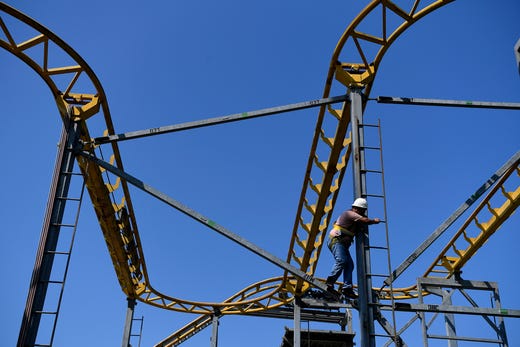 Workers set up the first ride for the York Fair, a roller coaster, along the midway, Wednesday, Aug. 29, 2018. The York Fair opens Friday, Sept. 7. John A. Pavoncello photo The York Dispatch
Fullscreen

"It feels like home," she said, remembering the lights as the sun sets, the big spectacle she could always see from the parking lot when she first got out of the car, and many other familiar memories.

Van Eman said as much as things stayed the same over the years, there was always something new to explore — such as, more recently, an exotic animal petting zoo.

She said she looks forward to coming back next fall and experiencing it all over again, but this time through her children's eyes.

"It's just one of my favorite memories about growing up in York," she said.