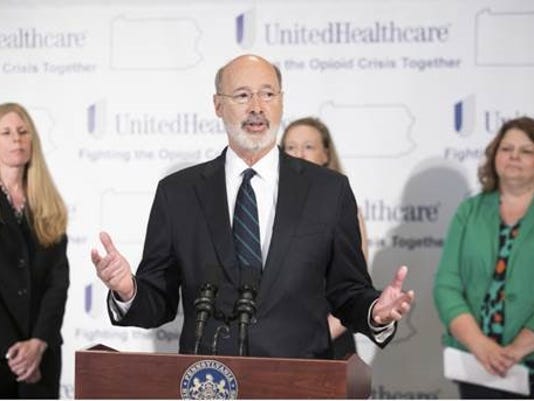 UnitedHealthcare donated 10,000 opioid disposal kits to York City's Byrnes Health Education Center and Family First Health on Friday, May 4, in an effort to make it more difficult for household drugs to become a pathway to addiction.

Thousands are dying from overdoses in Pennsylvania each year — more than 5,200 deaths are expected in the tally for 2017, which is more than those who die in traffic accidents, said Gov. Tom Wolf.

More: Shapiro to York Rotary: We can't arrest our way out of opioid crisis

The Drug Enforcement Administration reported the state had more than 4,600 overdose deaths in 2016 — 85 percent involving an opioid drug, according to a news release.

"This epidemic is actually something that unites us and brings us together," Wolf said.

It's a nonpartisan issue, he said, affecting all demographics from rich to poor, urban to rural, north to south.

York County is one of 10 communities across the country selected by UnitedHealthcare for its high rate of impact from the opioid epidemic. In each community, the company finds a local health partner to distribute the drug disposal kits.

Family First Health was designated in 2016 by the Pennsylvania Department of Health as a Center of Excellence for opioid use disorder treatment — one of 45 in the state.

Together with the Byrnes Health Education Center, the local health care provider will distribute the kits throughout the county.

Tackling the opioid crisis as a primary care provider is "messy," she said, acknowledging the stigma, fragmentation of services and lack of a clear pathway in treatment.

The kits are just another essential piece to treatment, she said. 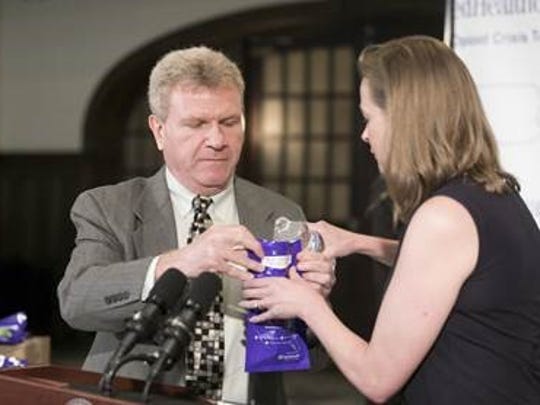 How it works: Martin Rosenzweig, chief medical officer of Optum Behavioral Health, demonstrated how the kits work — dropping a pill in a pouch, adding warm water and sealing and shaking it.

Active carbon in the pouch reacts with the drugs to deactivate them, making it safe to discard them in household garbage, he said.

Rosenzweig added that it's convenient for those who might not have transportation to get to a center or drug drop box to properly dispose of opioids.

Each kit deactivates up to 45 tablets or six opioid patches, and they were provided thanks to a partnership with Mallinckrodt Pharmaceuticals.

Heather Cianfrocco, CEO of UnitedHealthcare, says it's a chance for everyone to participate and be a part of prevention.

More: Poll: Most Americans see drug addiction as a disease

Why it's a problem: Statistics show that opioids found at home can be a gateway to addiction.

Sixty percent of Americans keep unused opiates in their homes, and 70 percent of people who misuse opioid painkillers first got them from family or friends, according to a news release.

Englerth said people often have the idea that they should be saving their leftover pills in case they might need them later, adding that she had heard the same thing from her mom, who was a nurse.

Cianfrocco said there's evidence supporting the idea that dependence starts earlier than previously thought — after about three to seven days of continuous use.

Getting rid of unused drugs in homes can prevent them from getting into the hands of kids and teens, she said, and dispose of them in a way that's environmentally safe.

"A study published last year by the American Academy of Pediatrics found an 86 percent increase in calls to poison control centers related to children being exposed to opioids in recent years; more than 60 percent were children under age 5," the release states.

He said if the drug disposal kits can help, he's all for them.

"People afflicted with substance abuse disorders have a medical problem," Wolf said. "This is not a moral failing. We've got to recognize that, we've got to confront it, and we've got to do something about it."