Rebecca Hanlon doesn't buy into the old news adage, "if it bleeds, it leads." 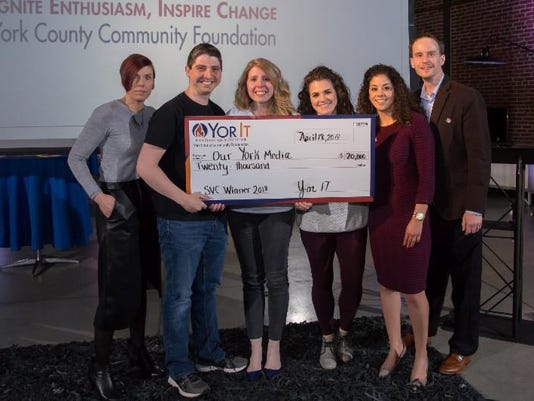 Rebecca Hanlon doesn't buy into the old news adage, "if it bleeds, it leads."

Her company, Our York Media, focuses on the good news taking place in York County, and she recently received good news in the form of a $20,000 YorIt Social Venture Challenge grant.

Hanlon, who runs the all-digital news company with her husband, Will Hanlon, competed against three other finalists at the annual YorIt event, held April 18 at the Warehaus, 320 N. George St.

Sponsored by the York County Community Foundation, the event encourages local organizations to present new and innovative ideas that would benefit the community and flesh out their ideas via a live pitch that's judged by a panel of community members, according to Sarah Thomas, YCCF marketing and communications director.

Live pitch: This was the first year the live pitches were given in front of an audience, Thomas said. In previous years, finalists gave their pitches to a panel of community members in a private room.

"It gave the four finalists who were picked additional exposure," she said

There were seven initial applicants, she said, and the winner was chosen based on the viability and sustainability of their ideas as well as how well-developed their plans were and how far along they were in the process of achieving their vision.

In addition to the live pitch, they also were required to create promotional video pieces, she said.

Our York Media: Hanlon and her husband are both former employees of the York Daily Record who branched out to form a company that focuses on community-based articles about the people, businesses and organizations who are making a difference in York County. These are stories that traditional media outlets may not cover, she said.

"We essentially want to be the good news outlet for York County," she said.

Last summer, the company created a series called Neighbors of Our York, which focuses on individuals who are making an impact on the community.

The company garners revenue by including stories that are sponsored by businesses and organizations, but Hanlon emphasized that all sponsored stories are indicated as such.

For Hanlon, the award was the culmination of months of hard work since they first applied in October 2017.

"When they announced we had won, I started crying. For us, it was really exciting," she said.

"I've always felt that if you're willing to roll up your sleeves, York will rally and support you," she said.

Hanlon plans to use the grant money to add audio and video to Neighbors of Our York, as well as create an audio/video podcast called Catalysts, which will focus on changemakers in York County.

Hanlon also hopes to generate more in-depth stories on current events and the ripple effect they have throughout the county.

Thomas said that those in attendance were invited to cast a $1 vote for their favorite live pitch, which resulted in a $4,514 community cash prize.

The prize was awarded to York Swings, whose goal is to make York a top destination for big-band music as well as swing and social dance, according to Tom McLaughlin, a York Swings! representative.

"It's certainly a great prize as well," McLaughlin said of the award. 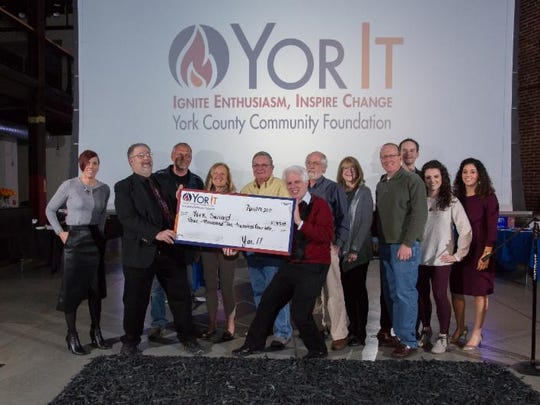 York Swings! was the winner of the $4,514 community cash prize at the YorIt competition. (Photo: Submitted photo)

McLaughlin said that York Swings! plans to use the money to host a series of quarterly events at the Valencia Ballroom, 142 N. George St.

Thomas said that the live pitch and the community cash prize are both tools to connect local visionaries with people who will support them.

"All of these projects have the potential to become part of our community," she said.