Two candidates for lieutenant governor hashed out their ideas for improving the state during a forum hosted by the York County Young Democrats. 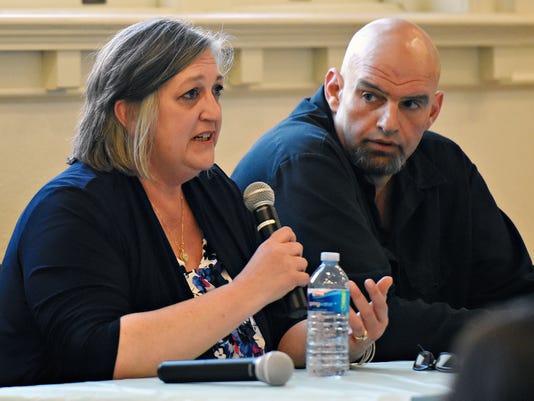 Two candidates for lieutenant governor hashed out their ideas for improving the state during a forum hosted by the York County Young Democrats.

John Fetterman, four-term mayor of Braddock, Allegheny County, and Chester County Commissioner Kathi Cozzone were the two candidates who participated in the debate.

Advocacy: After brief introductions, the candidates were asked about the issues they would advocate for as lieutenant governor.

Cozzone said that reducing the number of nonviolent mentally ill people who are incarcerated in county jails is an issue that's dear to her heart, as they have the highest rates of recidivism because of lack of treatment.

"It is not only morally, terribly wrong, it is terribly expensive," she said.

More: Whose names will York County see on the 2018 primary ballot? 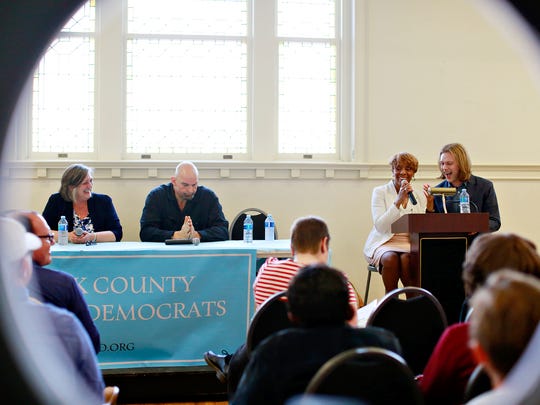 Cozzone said that she could effectively use her office to advocate for the mentally ill and bring people together to find solutions.

Fetterman said that the office would serve as a statewide extension of the advocacy work he's already done.

He also said that he would support communities that have been "marginalized and left behind,” saying that Braddock was one of those areas until he was elected mayor and put forth initiatives to improve the community.

"For the last 17 years, it's been the great professional honor of my life to champion communities and places like that," he said.

He also said that the population of Braddock is 80 percent African-American, and he's particularly sensitive to the plight of minority groups.

"I very much want to be that champion for people, places and policies all across Pennsylvania. That's the main reason I'm running for lieutenant governor," he said.

Working with the governor: The candidates were then asked how they would ensure  a positive working relationship with Gov. Tom Wolf.

Cozzone said that Wolf appointed her to two statewide advisory committees: the  Geospatial Coordinating Board, which helps develop state policy for sharing data collected on land use and topographical features, and the Joint State Government Task Force Advisory Committee, where she researched voting technology and recommended improvements.

“I know that I can have a good relationship with the governor,” she said.

“I can’t promise you that the governor and I will agree on every single issue, but I can promise you that I will work with him to make sure we are advancing all of the issues that are so critically important to us,” she said. 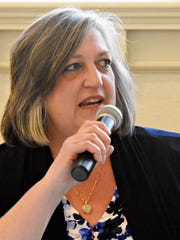 Fetterman alluded to the relationship Wolf has with current Lt. Gov. Mike Stack, who is running for re-election.

“It’s no secret that the lieutenant governor doesn’t enjoy a good working relationship with the current governor, and I think that’s a shame," he said.

He argued that the office of the lieutenant governor is one of the most "underutilized and undervalued" positions in the state and could be used more for advocacy.

However, he also reminded residents that they need to vote to ensure Wolf’s re-election.

"We can't leave any votes on the table this fall," he said.

Fetterman said he was the first candidate to disavow living in the lieutenant governor's mansion.

“I think that the word 'mansion' should not be associated with a public servant," he said.

He also said it was an unnecessary cost to taxpayers.

"But more important than the cost, it’s the message that it sends to the people that the lieutenant governor is unapproachable and I get to live in a mansion on your dime," he said. 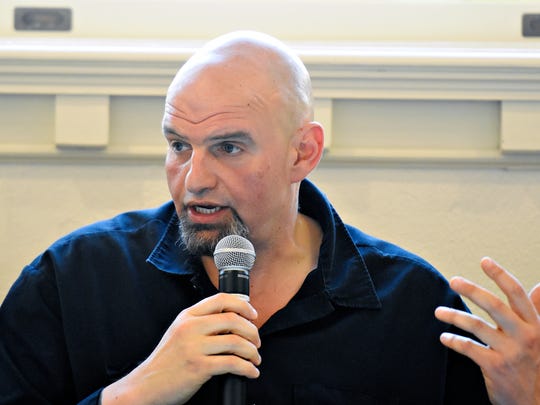 Cozzone also said she would not occupy the residence.

"I have no need for a mansion, nor would I want one," she said.

However, she said that the mansion is an asset of the commonwealth, and they could find potential ways to use the facility so it doesn't sit idle.

"It could be a useful building for citizens of the commonwealth," she said.

Accepting the salary:  In one of the more controversial questions of the night, the candidates were asked if they would accept the $160,000 annual salary for the lieutenant governor and if they felt the amount should be decreased.

Fetterman said he would accept the salary because he needed the money to live on and put his children through college.

"Is it excessive? It sounds excessive," he said, adding that he would not be opposed to a pay cut.

However, he advocated for a $15 minimum wage hike to bring the public closer in line to what elected officials make.

"Your elected officials shouldn't be sitting pretty and living large when hundreds and thousands of people in Pennsylvania are trapped in low-wage jobs and are unable to care for themselves and their families," he said.

Cozzone said she was not independently wealthy and would have to accept the salary. She said she hasn't researched whether or not the salary was excessive.

"To me, it's not about how much money the job is going to pay me. It's about what I can do as lieutenant governor," she said.

Cozzone cited her involvement in bringing workforce development programs to Chester County and said that the state needs to address employment and underemployment by raising the minimum wage and also providing education and training to those who need it.

"We need to make sure we are training people to be able to work in the jobs that are available," she said.

The primary election is Tuesday, May 15. Along with Cozzone, Fetterman and Stack, Nina Ahmad and Ray Sosa are on the ballot for the Democratic nomination for lieutenant governor.