Each spring, pinwheels pop up among the tulips and the dandelions in York County, a man-made reminder of innocence lost to childhood sexual abuse. 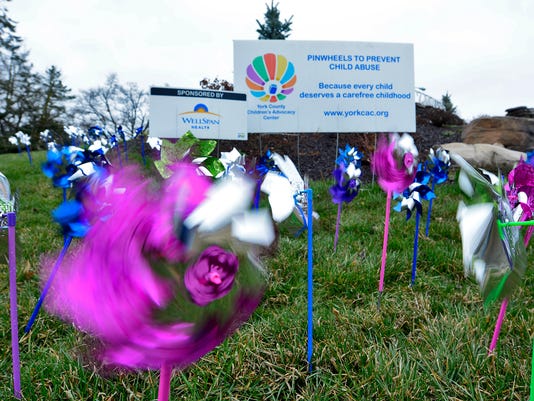 A pinwheel garden has been planted at the intersection of S. George St. and Rathton Rd. to draw attention to the issue of child abuse in York County. The pinwheel is a colorful childhood toy that has come to symbolize child abuse prevention., Tuesday, April 3, 2018. John A. Pavoncello photo(Photo: The York Dispatch)Buy Photo

Each spring, pinwheels pop up among the tulips and the dandelions in York County, a man-made reminder of innocence lost to childhood sexual abuse.

The pinwheel gardens are placed every April in honor of Child Abuse Prevention Month, but this year county advocates are hoping to achieve something more powerful than mere symbolism.

This year, the county is one of only four in the state to receive grant funding for a pilot program that will educate the community, schools and parents about the danger of childhood sexual abuse and what they can do to identify and prevent it.

The announcement was made on Tuesday, April 3, at a kickoff event held at the York County Children's Advocacy Center. Established in 2006, the center provides forensic interviews, medical exams and referrals to victim advocacy groups and mental health services.

According to Melissa Page, who was recently hired by the advocacy center to oversee the program, it will be funded by a three-year grant from Endowment Act funds.

It will be instituted in York County as part of a collaboration between the advocacy center, YWCA of York and the Office of Children, Youth and Families.

Page said there are three components of the program that will be rolled out in successive phases — community, schools and at-risk parents.

Phase one, community: The first phase of the initiative has already begun, Page said. It involves the "Darkness to Light" program, a free, adult-centered training that teaches the community about the dangers of child sexual abuse, how to identify it and how to prevent it and address it.

The nationwide program is offered by "Stewards of Children," Page said, a national advocacy group for child abuse victims.

Training is available online or in-person, she said, and can be accessed through the center's website at www.yorkcac.org.

The goal of the community training is to reach 5 percent of York County adults, which translates to 17,000 people. This is an ambitious goal, she admitted, but studies indicate that 5 percent is a vitally important number in achieving change.

"Five percent is the tipping point where you see change in the community," she said.

Phase two, schools: The second phase of the initiative will be rolled out during the 2018-19 school year, Page said. Second-graders will participate in a program called "Safe Touch," which uses interactive presentations with puppets to teach children how to identify "unsafe touching," and how to respond if it happens to them.

"It's empowering for them to say, 'I am the boss of my own body and this is not OK,'" she said.

All but three school districts in York County have agreed to participate at this point, she said, and she's hoping to increase that number before the fall.

Phase three, parents: Phase three will address parents and guardians who come in contact with CYF, she said. These at-risk families will be provided with a training program called "Incredible Years," which teaches about the social and emotional vulnerabilities of children, as well as effective parenting techniques.

In addition, they will offer a program called "Smart Parents: Safe and Healthy Kids," which teaches parents how to recognize and prevent child sexual abuse, she said.

The program will be administered by Children, Youth and Families caseworkers, who will spend the rest of 2018 in training. The evidence-based program is offered through Penn State University, she said, and research will be gathered as the program goes on, she said.

Page anticipates that the program will be launched in 2019.

Pinwheels: In conjunction with the event, a pinwheel garden was planted at the corner of George Street and Rathron Road near York Hospital and will represent the 770 children who visited the center in 2017, according to Deb Harrison, executive director of the advocacy center.

Also, more than 16 mini-pinwheel gardens will be planted around the county at schools, businesses, nonprofits and other organizations to spread awareness, and the gardens will remain throughout April.

A pinwheel garden has been planted at the intersection of S. George St. and Rathton Rd. to draw attention to the issue of child abuse in York County. The pinwheel is a colorful childhood toy that has come to symbolize child abuse prevention., Tuesday, April 3, 2018. John A. Pavoncello photo (Photo: The York Dispatch)

A victim's journey from Darkness to Light:  Alise, a 14-year-old sexual abuse survivor, told her story at the kick-off event.

The teenager, who experienced her first incident of abuse at the age of 3, spoke with poise and clarity beyond her years as she recounted the efforts her parents and the advocacy center took to protect her from further traumatization at the hands of her abuser.

Alise spoke of the emotional letters her mother wrote to a judge every few months to prevent her juvenile abuser from moving back to his home, located one street away from hers, and shattering the security of the safe haven her family had strived to provide for her.

She spoke of her father, whom she described as a "silent wall of stone and a shining beacon of light" in her family's darkest days, who put on a "face of normalcy" as he went to work each day, pretending as if everything was as it should have been.

"My dad's voice wasn't used to fight my abuser, it was used for something just as important, if not more, important — our stability and sanity," Alise said.

She also thanked the local advocacy center and its forensic interviewers and social workers who built a wall of protection around her as she journeyed through the arduous and often terrifying experience of seeing her abuser in court.

"If it weren't for them, the process of court and therapy would have been too much to bear," Alise said.

Then, she spoke on behalf of her fellow survivors, the millions of children who were manipulated by people they trusted, who were powerless in the face of adults who should have protected them and who sometimes suffered for years without help.

A pinwheel garden has been planted at the intersection of S. George St. and Rathton Rd. to draw attention to the issue of child abuse in York County. The pinwheel is a colorful childhood toy that has come to symbolize child abuse prevention., Tuesday, April 3, 2018. John A. Pavoncello photo (Photo: The York Dispatch)

"Sexual assault is one of the worst crimes, if not the worst, that can ever be committed by a human being," she said.

"I wouldn't wish even just one of my instances of assault upon my worst enemy. I wouldn't even wish it against my former abuser himself," Alise said.

She emphasized that that abuse is more than a "standalone" incident, and its emotional ramifications last for years.

"No person should have to hold that amount of weight on their soul and their heart," she said.

This year, Alise asked the community to participate in the county's new initiative and fight for kids to have the opportunity for more children to grow up with their "innocence and trust intact."

"Become the hero and not the bystander," she said.