The York City restaurant will make it official with a ribbon-cutting ceremony Saturday, March 29 at 4 p.m.

The restaurant at 361 W. Market St. in York City made it official with a ribbon-cutting ceremony Saturday, March 29.

Tobin's renovations included 3,200 additional square feet of restaurant space, 14 seats in the expanded space with a new, larger bar, 20 to 30 seats in the restaurant's lounge space and 60 outdoor seats.

Renovations began in February 2016, five years after Tobin and his wife bought the adjacent building, which used to be an antique shop.

York Blue Moon has expanded to include both 361 and 355 W. Market St. in York City, Tuesday, April 3, 2018. Co-owners Janine and Darrell Tobin opened the restaurant in 2006, and the expansion has been four years in the making, according to a press release issued by Downtown Inc. Dawn J. Sagert photo The York Dispatch
Fullscreen

With the renovations come a new bar menu — featuring Tuna Tartare, a meatball sandwich and a crab and Brie quesadilla made with ginger marshmallow fluff— cocktails, beer and wine, according to a news release.

The restaurant can now accommodate wheelchairs of up to 42 inches and has larger bathrooms to provide more accessibility. 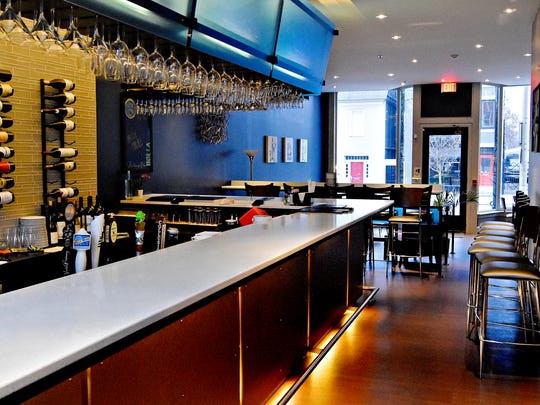 For Tobin, improving accessibility was the major impetus of the expansion, the release states.

"Not only did we want to increase our business, we wanted to increase our customer base by making it easier for everyone to enjoy a fine dining experience at Blue Moon," he stated.

The restaurant's West Market Street location is in the vicinity of several new additions to the WeCo neighborhood, including 13 new high-end RSDC apartments with retail space, a GRIT Marketing Group office and a Fortress Initiative computer coding boot camp in the former National Bank Building.

“York Blue Moon is not only an excellent place to enjoy a meal, it’s a catalyst for ongoing change in the city," he continued. "When restaurants invest, others follow.”