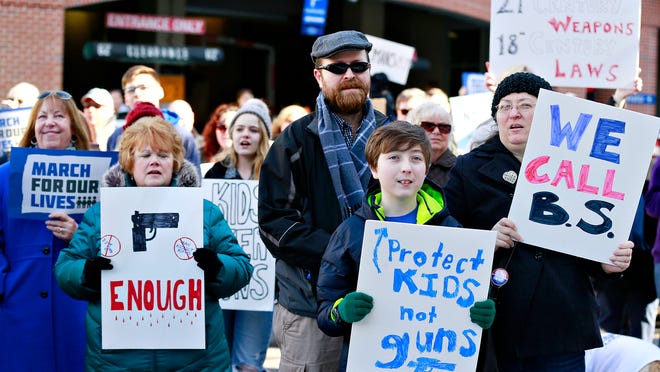 Hundreds of people poured onto East Market Street in downtown York City for one of many sibling marches to the national "March For Our Lives" movement Saturday, March 24.

Local students had their own reasons for speaking up against gun violence and advocating for changes in legislation.

'Because I don't want my school or any school to be next," Dover Area High School junior Ethan Snyder said. "I think it's time — past time — to make a difference (and) have our voice be heard."

"Any school could be next," fellow Dover junior Nico Shearer added. "Doesn't matter where you live or how safe it is."

For West Perry High School seniors Tara Smith, Jaydn Donnelly and Addison Thomas — along with former classmate Victoria Ziegler, who now attends York College — coming to the march was important to prove to their classmates that there is a need for change.

In a rural county like Perry — about an hour north of York County — they said, many people don't understand that changing gun laws does not mean taking away Second Amendment rights.

"It's important for students to come out," Ziegler said. "We can plant the seeds of change and encourage our peers."

Around the country, hundreds of thousands of people marched to urge better gun regulations after the Feb. 14 shooting at Margery Stoneman Douglas High School in Parkland, Florida, that killed 17 students and teachers.

Signs read "I teach the generation that will save us all," "Save our kids," and "Math teacher, not gun teacher."

"This is not about taking away your right to own a gun," Thompson said, but about responsibility in gun ownership.

Planning for the march: Former Red Lion Area Junior High School students began planning a local march as a way to speak up against gun violence in schools.

They had dealt with their own tragedy in 2003, when fellow student Jimmy Sheets shot and killed the school's principal, Eugene Segro, before turning the gun on himself.

More:March for Our Lives York: 'Step up and take a stand'

"As former students who experienced a school shooting," wrote Kelsey Lauder in a post on the march's Facebook event page, "we took that responsibility to stand up for all of the students and our communities to create this event."

Darlene Smith, an English teacher in the district for 34 years, said she remembered the day Segro was shot and killed. It's one of the reasons she decided to march on Saturday.

She and friend Maggie Manning are members of the York County Federation for Democratic Women, and they are supportive of young voices.

Lauder, an eighth-grader at the time of the Red Lion shooting, organized the march with classmates Maggie Stauffer Holroyd and Amandah Stem.

They have been working closely with anti-gun violence organization Everytown For Gun Safety, which Lauder said partnered with Parkland, Florida, students days after the Feb. 14 shooting to help organize the "March for Our Lives" in Washington, D.C.

Local marches registered through the organization's website, which has entries from York, Harrisburg, Lancaster and Gettysburg.

Finding a voice: Since the Parkland shooting, students have been looking for outlets to raise their voices — some through community events such as the Martin Library's Teen Town Hall, in which student panelists shared their thoughts on school gun violence, and some through organized student walkouts with the support of their districts.

More:Students, York leaders discuss how teens can effectively have a voice

More:VIDEO: Student speaks on walkouts, what to do if silenced

Lauder does not believe the walkouts really gave students the chance to make a statement. With many of the walkouts taking place indoors, the message became more about safety and unity, she said.

Thompson agreed, saying that though alternatives were helpful, a student's right to speak out should not be taken away.

Kochik reached out to every school district's student council to invite students to the march, and Lauder knew of students who were planning to attend from Dover, Red Lion, Dallastown, Central York and York Catholic.

Support: Local and area groups such as CeaseFirePA, Moms Demand Action — PA, the York County Federation of Democratic Women, Rise Up York and Indivisible York offered help or shared their support on Facebook for the York march.

Everytown has offered a $5,000 grant, and Lauder said she is looking for a nonprofit to accept it on her group's behalf.

Garcia said Casey, who attended Saturday's march in Philadelphia, does not believe giving teachers guns will make schools safer — in fact, it could hinder first responders in identifying a shooter.

He is in favor of legislation that would ban large-capacity magazines and require universal background checks, she said.

Mauck, a Democratic candidate for the state Senate in the 28th District, challenged his fellow candidates, in the next 30 days, to have a bipartisan debate on the root causes of violence in the community before a public forum.

He also supported the right of students and young leaders to have a voice.

"Just because you're talking doesn't mean you're finished," he said of young people. "This is the beginning."

What's next: Lauder and fellow organizers handed out flyers during the march encouraging others to stay involved.

"It's gonna come down to voting," she said.

Manning agreed, saying that as young people raise their voices, "We need to make sure we as adults are here to vote."

Lauder pointed to five legislative actions aimed at ending gun violence: allowing funding for the Centers for Disease Control and Prevention to research gun violence; universal background checks that close loopholes; digitization of gun sale records; a ban on high-capacity magazines; and an assault-weapon ban with a buyback program.

Why do it: Having the opportunity to share her experiences has been helpful for Lauder, and she hopes it's the beginning of something bigger.

"It continues to get easier to talk about," Lauder wrote in a Facebook post Thursday, March 22.  "It's as if 15 years of silence were just preparing me for being a part of this movement and something bigger than what happened to us."

She said many of her former classmates feel they still can't talk about what happened, and they appreciate that she's giving voice to it.

Lauder said that when school shootings happen, the whole issue becomes so complex that it's easier to ignore it than to do something about it.

"What I really want to come out of this is we don't let it go this time," she said of the march.