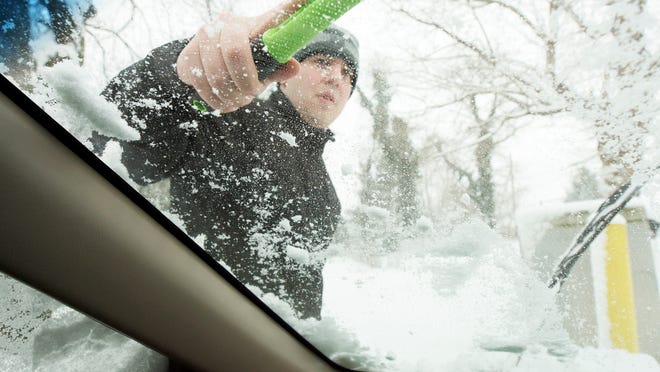 York municipalities are beginning to declare snow emergencies and announce cancellations as a winter storm enters the region with a potential snowfall of 6 to 10 inches.

The City of York declared a snow emergency starting at 5 p.m., Tuesday.

City residents who live along a snow emergency route are required to move their vehicles by 7 p.m. If vehicles are not removed by this time, they will be towed and a citation will be issued.

The following streets are impacted:

More:Winter storm warning: 6 to 10 inches of snow and sleet possible

Parking: Free parking is available to all residents affected by the parking bans, including the King Street, Philadelphia Street and Market Street Garages.

More free parking is available at:

* Lot 3A, Newton and Howard avenues

North York: North York declared a snow emergency, from 7 p.m. Tuesday, March 20, until 8 a.m. Thursday, March 22. Residents must remove parked vehicles from the street or they will be ticketed and towed.

Residents with questions should contact the Borough of North York at 717-845-3976.

Snow and ice must be removed from sidewalks within 24 hours.

Felton: A snow emergency was also issued for Felton at 2 p.m. Residents must remove parked vehicles from High and Main Streets by 3 p.m. The police will not issue warnings and violators may be tickets and towed.

Residents are also not permitted to deposit snow in any manner onto a street after it has been plowed and are required to remove snow and ice from their walkways within 24 hours.

Windsor Township: A snow emergency was issued for Windsor township that will begin at 5 p.m. and last until 9 p.m., Wednesday.  All vehicle parked on the streets should be removed to allow plowing.

Parking is prohibited on winter storm emergency routes, including Church, Main, Manchester, Baltimore, Hanover, Valley and Water streets. Vehicles may be towed at the owner's expense.

Mount Wolf: A snow emergency is in effect beginning at 7 p.m. Tuesday.

All vehicles must be removed from snow emergency routes, and residents are reminded not to shovel snow into the roadway.

East Prospect: A snow emergency is in effect from 3 p.m. Tuesday through 11 p.m. Wednesday.

Parked vehicles must be removed from streets marked as snow emergency routes, and residents are asked to move vehicles from all streets to allow snow plows to clear the streets.

Residents with questions should contact East Prospect borough at 717-252-0177.

Snow must be cleared from sidewalks within 18 hours after the snow stops. Do not pile snow on public property, right of ways, sidewalks or alleys, and do not pile snow back onto cleared streets.

Fawn Township: A snow emergency is in effect until further notice.

It is prohibited to park or remain parked on any street or highway within the township, and only vehicles with snow tires or chains are permitted for driving.