The 2018 County Health Rankings Report ranks York County at No. 19 in health outcomes and No. 13 in health factors

York County continues to be one of the top 20 healthiest counties in the state, but there is still room for improvement.

York ranked No. 19 in health outcomes and No. 13 in health factors out of Pennsylvania's 67 counties, according to the 2018 County Health Rankings report released Wednesday, March 14.

Each year, the University of Wisconsin Population Health Institute and the Robert Wood Johnson Foundation compile a report that measures health outcomes by length and quality of life along with health factors, measured by clinical care, health behaviors, social and economic factors and physical environment.

Unhealthy behaviors: York County ranked No. 25 in health behaviors, an improvement from where it ranked last year, at No. 30. Still, 34 percent of county residents are obese, having a body mass index of 30 or more, compared to 30 percent of the state. The county percentage of obesity rose 1 percent from last year, from 33 percent, according to the report.

Meanwhile, county residents' access to exercise opportunities is below the state average, at 59 percent versus 68 percent. That refers to the percentage of residents who live close to a location of physical activity, such as parks (local, state and national) and recreational facilities (such as gyms, community centers, YMCAs and pools), the report said.

Not only did the county rank 9 percentage points below the state this year, it fell from 78 percent last year, a 19 percent drop.

This figure is stunning to Deborah Gogniat of the Healthy York County Coalition, who said York County residents regularly rank access to parks as one of the most appealing qualities of their county.

She could find no evidence that county residents have a experienced a sudden, drastic drop in access to local parks and recreational centers.

"I think it's a fluke in the numbers," she said.

However, residents' physical activity remains slightly higher than the state average, with 22 percent having reported no physical activity in the past year, versus 24 percent of the state population. Gogniat believes this is because of a variety of initiatives created by several organizations in the county to get residents outside and walking on a regular basis. 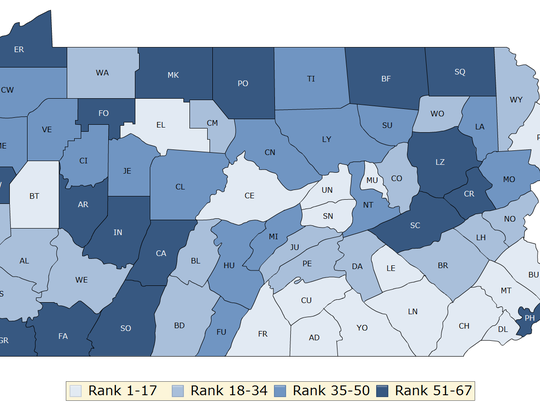 Overall: With the exception of the obesity ranking, York County is doing well in terms of health, according to Jerry Spegman, a community coach for the County Health Rankings and Roadmaps organization.

"York County, as a whole, is in pretty good shape," he said.

County residents' access to clinical care dipped slightly from 2017 to 2018, from No. 7 to No. 9. However, the county continues to excel in the areas of account provider-to-patient ratios, rate of uninsured patients, preventable hospital stays and mammography screening, according to the report.

Poor physical environment: York County held its position at No. 65 in its physical environment ranking. In this category, a county's level of pollution is measured by its average daily density of fine particulate matter in the air. York County's pollution is ranked at 12.1 micrograms per cubic meter, compared to 10.4 statewide, and drinking water violations were reported for the second year in a row.

York County also ranked poorly in the number of commuters who drive alone to work, which remained at 85 percent for the second year, compared to 77 percent statewide. The act of driving to work is included in the physical environment category because it lowers a population's physical activity levels and worsens its air quality, the report said.

Allegheny and Northampton were the only two counties to rank lower than York in the physical environment category, but Lancaster County ranked only slightly higher, at No. 64.

However, Spegman said that physical environment is only weighted at 10 percent among all the factors that determine a county's health ranking.

For more information, check out www.countyhealthrankings.org.