Shapiro to York Rotary: We can't arrest our way out of opioid crisis

“We lost nearly 5,000 Pennsylvanians last year due to the heroin and opioid epidemic —a 28 percent increase in York County,” he said.

Shapiro to York Rotary: We can't arrest our way out of opioid crisis

State Attorney General Josh Shapiro discusses the state's response to the opioid epidemic in the state and York County at the weekly Rotary Club of York meeting Wednesday, Feb. 21. 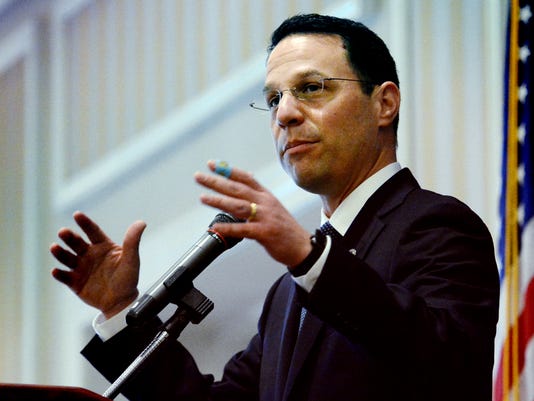 The opioid crisis in Pennsylvania claims the lives of 14 Pennsylvanians a day, according to state Attorney General Josh Shapiro.

“We lost nearly 5,000 Pennsylvanians last year due to the heroin and opioid epidemic —a 28 percent increase in York County,” he said.

Shapiro spoke at a weekly Rotary Club of York meeting Wednesday, Feb. 21, addressing the state's approach to the opioid crisis across Pennsylvania and in the county.

Tackling the issue takes a multi-disciplinary approach, he said, including locking up high-level dealers and arresting doctors and health care providers diverting legal prescriptions for illegal use.

Shapiro reported that the state arrests an average of five drug dealers a day — a 19 percent increase from 2016 — and diversion arrests are up 72 percent from 2016 to 2017.

“We had a major pipeline that was running from New York City through York County out to Altoona that we shut down in 2017," he said.

But Shapiro said he believes the most important important issue to tackle in the crisis is the need for more treatment.

More: How best to treat opioids’ youngest sufferers? No one knows

“I don’t believe that we can arrest our way out of this crisis," he said. "I believe we need to understand fundamentally that someone suffering from drug addiction is battling a disease, not necessarily committing a crime.”

York County Coroner Pam Gay agreed with Shapiro that treatment was important, saying people without access to treatment are dying before they can get a bed.

She is supportive of legislation that would require more regulation in recovery houses as well, noting that better standards for those in recovery would help reduce overdoses because many die trying to abstain.

It also would help parents better determine which recovery houses are good, she said. York Opioid Collaborative President Matt Howie agreed there is a wide variation in quality.

Prevention: But Gay doesn't want to detract from the importance of prevention.

"I feel we are making headway with prevention," she said.

The county is experiencing a leveling off of heroin-related deaths and suspected deaths, which the coroner said is typical from time to time. But she is hoping for fewer deaths this year.

It takes a community effort, Gay said, and though the county has a long way to go, progress is being made.

Howie said a statewide disaster declaration has made it easier to provide York County EMS providers with naloxone, an overdose-reversal drug.

On the state level, the declaration also has helped with better tracking of overdoses and neonatal abstinence syndrome, he said.

A significant number of babies have been found with NAS in recent years, Howie said, and the collaborative is working with medical professionals, including a team at York Hospital, on best practices in those situations.

“Now some folks will say, 'I don’t understand what these pills have to do with heroin,'” he said.

Four out of every five people who use heroin start their path to addiction with a legal prescription drug such as OxyContin or Percocet, Shapiro said, and 72 percent of them get those drugs from friends, family or medicine cabinets.

Shapiro said kids know that it’s not OK to put needles in their arms and shoot up with heroin, but they might not always know the dangers of grabbing pills from their parents’ medicine cabinet.

“If you go try to buy one of these pills on the streets of York — York City, York County, wherever — you’re going to spend about 50 bucks a pill,” he said, whereas a bag of heroin is about $5 to $7 per bag.

“Pennsylvania is one of four lead states in a 41-state multi-state investigation into the five opioid manufacturers and three distributors that provide over 90 percent of this nation’s opioid painkillers,” he said.

When asked about the legitimacy of necessary prescription drugs after surgery, Shapiro said he recognizes the need for pain medications and knows that the majority in the medical community prescribe medications appropriately.

But he said the investigation is needed to determine whether some have turned a blind eye to the destructive impacts of opioid painkillers over time.

“I think it’s fair to ask after you’ve had your teeth pulled, do you really need 60 days' worth of Percocet?” he said.

"When you overprescribe these drugs and they’re making their way out there and people are getting addicted to them, then you’re creating a greater crisis down the road," he said.

Join the fight: “We need the public to join us in this fight,” Shapiro said, challenging state residents to utilize drug deactivation boxes to dispose of their old medications.

More: Dispose of extra opioids with free packets from Walmart

In 2016, Pennsylvanians disposed of 26 tons of unused prescription drugs, and that amount doubled in 2017, Shapiro said, noting 20 percent of old medications are opioids.

"I don’t have to point out the obvious," he said. "A pill doesn’t weigh a whole lot."

Shapiro also encouraged leaders to do away with the stigma of addiction by letting others know it’s OK to ask for help.