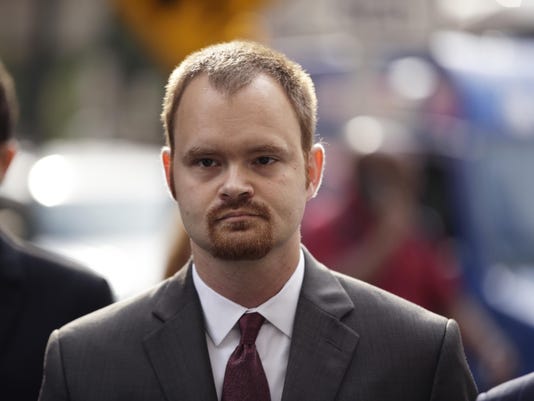 FILE - In a Sept. 12, 2017 file photo, Brandon Bostian, the Amtrak engineer charged in a Philadelphia derailment that killed eight in 2015, arrives for a preliminary hearing at the Criminal Justice Center in Philadelphia. Bostian has been ordered to stand trial on criminal charges for the deadly 2015 derailment in Philadelphia. A judge on Tuesday, Feb. 6, 2018 reinstated involuntary manslaughter and reckless endangerment charges against Bostian. (AP Photo/Matt Rourke, File)(Photo: Matt Rourke / AP)

Judge Kathryn S. Lewis ruled that another judge erred in dismissing the reckless endangerment and involuntary manslaughter charges at a hearing in September.

Lewis said evidence at the hearing — including testimony from an injured passenger and gruesome details of tattered cars and strewn limbs — should have been sufficient to warrant a trial.

“The victims are going to have their day in court, which is all they have ever sought,” said Thomas Kline, the lawyer for the family of a victim that kept the case alive by filing a private criminal complaint after city prosecutors declined to bring charges.

Eight people were killed and about 200 were hurt when the Washington-to-New York train rounded a curve at more than twice the 50 mph speed limit and hurdled off the tracks.

National Transportation Safety Board investigators concluded Bostian lost his bearings while distracted by radio chatter about an incident with a nearby train. They found no evidence Bostian was impaired or using a cellphone.

Bostian, 34, remains free on bail but must give up his passport and call court officials weekly. He opted not to attend his Feb. 21 arraignment.

Bostian’s lawyers declined to comment on the ruling. They’ve argued before that his speeding was a momentary lapse from an otherwise safety-conscious engineer.

Bostian has been on unpaid leave from Amtrak since the crash. He is suing the government-owned railroad, alleging he was left disoriented or unconscious when something struck his train before it derailed.

NTSB investigators have said nothing struck the locomotive.

Amtrak has taken responsibility for the crash and agreed to pay $265 million to settle civil claims filed by victims and their families.

New technology: The railroad has installed positive-train control technology that can automatically slow or stop a speeding train on its track from Boston to Washington.

The technology wasn’t in place when Bostian’s train crashed and is still missing on third-party tracks Amtrak uses in other parts of the country. It wasn’t in place on tracks where deadly crashes occurred in South Carolina on Sunday and in Washington State in December.

Pennsylvania’s attorney general picked up the criminal case against Bostian last May, as a statute of limitations loomed. City prosecutors said their decision not to prosecute Bostian left them unable to take up the criminal complaint from the family of crash victim Rachel Jacobs.

Jacobs, the head of a Philadelphia-based technology startup, was returning home to her husband and 2-year-old son in New York when she was killed. She was 39.

“We see no extenuating circumstances,” Kline said. “Mr. Bostian had one job and one job only on that day, which was to get the train from Point A to Point B and to carry those passengers safely. He did not do that. He has no excuse for the speeding on the tracks that day.”