'I'm not a racist': Ex-Spring Grove board member throws hat in ring for House seat

The former Spring Grove Area school board member is running as a Republican in the 93rd District primary this May.

'I'm not a racist': Ex-Spring Grove board member throws hat in ring for House seat

During the 2016 campaign, it was difficult to find a supporter of then-presidential candidate Donald Trump more fervent than Matthew Jansen.

The controversial former Spring Grove Area school board member and delegate to the Republican National Convention attended party events all over the state and knocked on more than 1,000 doors in New Hampshire ahead of that state’s Republican primary — which Trump won.

My endorsement is official! Donald Trump for President 2016!

While the signs have come down, Jansen hasn’t changed his tune on now-President Trump as he throws his hat  into the ring in the race to fill the seat of Kristin Phillips-Hill in Pennsylvania's 93rd House District.

Phillips-Hill, a second-term Republican representative from York Township, is seeking her party's nomination to replace state Sen. Scott Wagner, R-Spring Garden, who is running for governor and has said he will not seek re-election for his Senate seat.

Jansen will face Mike Jones — a fellow Dallastown resident who was the longtime president of St. Onge Co., a consulting and engineering firm — for the Republican nomination.

“Communist members of the Un-democratic Party not coming to the State of the Union, who cares? They are irrelevant...” he tweeted Jan. 18. “This is America! We do not need them! We have the majority!”

Jansen said his Trump-like tweets are an important communication tool to share his feelings on certain matters, and since he believes it has worked so well for the president, he will continue to use the medium if elected to the House. 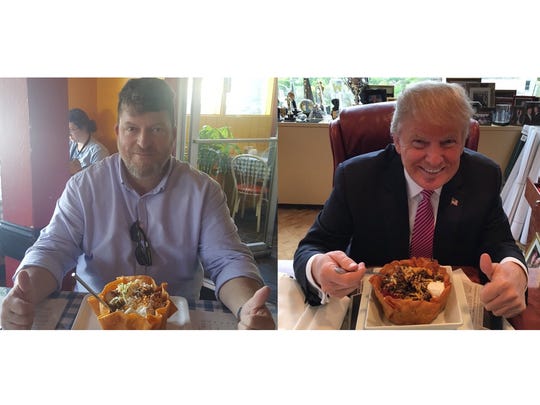 A Dallastown native, Jansen grew up the son of a lineman father and a homemaker mother.

His late father, Bob, served in Gen. George Patton’s Third Army in World War II and emphasized the values of hard work, bluntness and unshakable patriotism, which made him a good judge of character, Jansen said.

“He could spot a phony from 100 miles away,” he said of his father, “and he instilled that in me.”

His blunt statements haven’t come without consequences, however.

Controversies: In June 2016, Jansen left a voicemail message for Dallastown Pastor Christopher Rodkey, who had posted a sign at St. Paul's United Church of Christ that wished “a blessed Ramadan to our Muslim neighbors.”

In the voicemail message to Rodkey, Jansen called the sign “despicable” and called Islam a “godless”  and “pagan” religion.

Jansen also was accused of racism in February 2017 after a message posted on his Twitter account announced, “Well than this wetbacks family should be thrown out of the country.”

The message was deleted soon after, and Jansen has maintained that he did not write the message and that he was the victim of a hack.

He resigned from the school board in August 2017 after moving back to Dallastown with his wife, Andrea, and daughter Maggie, 11.

Jansen said he apologized for the voicemail he left with the pastor because it might have offended Muslim students attending Spring Grove schools.

However, he said he stands by his claim that Islam is a godless religion, and he bases that on his Christian beliefs.

"I didn't say one thing that was incorrect," he said.

Jansen said his "Judeo-Christian faith" leads him to believe Christians and Jews pray to the same god.

Other faiths, including Islam and Hinduism, are false gods.

"You call yourself the moon god, but you're not God," he said. "Just because someone says it is so doesn't mean that it is."

He maintains his beliefs won't impact the way he will stand up for taxpayers of another religion or race, however.

“I would represent (minorities) just as much as I will represent people that look like me,” Jansen said. “They have nothing to worry about. I’m not a racist.”

Issues: The self-described “extreme conservative” said he would not budge on three issues as a representative: school property taxes, immigration and regulatory reform.

He voted against increasing property taxes in the two budget cycles he was a part of as a Spring Grove Area school board member.

Jansen said he is “extremely conservative” on nearly every issue except for one: the environment.

He is a sales representative for the Seven Valleys-based green energy startup Planet Fry, which recycles used cooking oil and turns it into fuel alternatives such as biodiesel.

He said he's seen research that suggests "the Earth is far more resilient than what might be commonly believed."

Jansen said the near-universal consensus from scientists that climate change is caused by human activity is part of a conspiracy from "left-leaning politicos" in government, churches and academia that make up what he calls the "Institutional Left."

"The Democratic Party and the Institutional Left could tell me it's light outside and I'd still look out and check," he said. "They've completely lost their credibility."

While he doesn't believe in human-caused climate change, Jansen said he believes people have a responsibility to keep rivers and streams as pollution-free as possible to maintain the beauty of the ecosystem.

Outsider: In all, Jansen said he hopes to run a fair and cordial race against Jones, his only challenger so far for the Republican primary in May.

He said he isn’t familiar with Jones’ policy positions, but it doesn’t matter — Jansen knows he’s the ultimate outsider, and in this tribal political environment, that can go a long way.