Scott Thompson, owner of ArthurLee LLC, explains the background of the trespassing suit against Red Lion. The court ruled the borough was trespassing on Thompson's property when it built a parking lot against his building. The borough council passed an ordinance establishing its right to claim eminent domain on the property at a special meeting on Wednesday, Dec. 27. 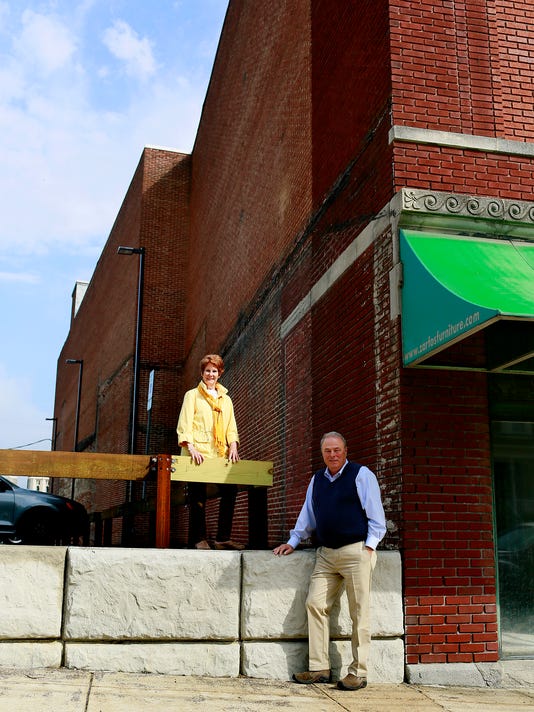 Scott Thompson, right, and his wife, Sandra Graham, owners of the Zarfos Furniture building, are shown in Red Lion's parking lot, which was built adjacent to their property in the borough, Wednesday, May 31, 2017. The couple recently won a trespassing lawsuit against the borough for essentially using their building as a retaining wall for the lot. Dawn J. Sagert photo(Photo: The York Dispatch)Buy Photo

According to the mayor, he vetoed the measure Thursday, Dec. 28, after hearing from concerned residents who attended the council's special meeting the night before. Kopp said he gave his veto to council member Nevin "Butch" Horne to deliver to the borough.

Horne and council member Dennis Klinedinst were the only two council members to oppose the ordinance at the Wednesday meeting, where several residents also voiced disapproval.

"Let me ask you one more time — we do not need to do this," Horne said to his fellow council members before they passed the ordinance. "You're doing it because you can. It's wrong."

Mayor Kopp, reached by phone Friday evening, said of the ordinance, "It potentially sets a precedent for the future."

He said he was concerned about how the passing of eminent domain would affect future investment in the borough.

"You do this to one party and property owner — who's next?" Kopp asked.

He said he was also concerned that the borough council was disregarding the will of its residents.

"This council has a history of ignoring large groups that speak out on issues," Kopp said. "They serve at the will of the people." 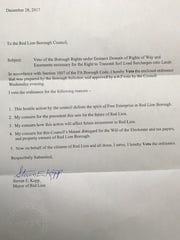 Next steps: Vice President Tony Musso said the council plans to reintroduce the ordinance at its next regular meeting Monday, Jan. 8, which will be attended by new council member Stephanie Weaver.

Walter Hughes will have replaced Kopp as mayor by then, and Musso said he expects Hughes to sign the ordinance.

Musso said Kopp "hadn’t been to any of the meetings regarding the issues, so for him to veto the ordinance is totally wrong." Kopp said he had attended post-meeting executive sessions discussing the lawsuit.

Council member Christina Frutiger, when reached by phone Friday evening, said she disagreed with the decision to veto. She was in favor of the ordinance, “because to me, somebody that has a building, a derelict building (next door) and gets a free parking lot, I would expect to be happy," she said.

It would be "better for Red Lion," she said, because limited parking space is a big issue, and she's heard a lot of support for more parking in the area.

Background: Scott Thompson and his wife, Sandra Graham, sued the borough for trespassing under their joint business, ArthurLee LLC, after the borough built a parking lot against one of their properties, the former Zarfos furniture store on West Broadway. 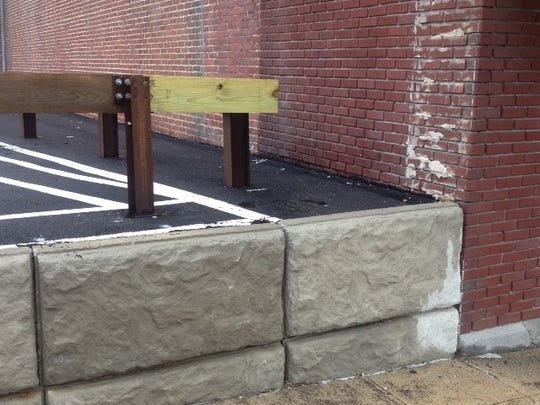 A couple recently won its lawsuit against Red Lion Borough for trespassing after the borough built a parking lot up against the couple's buidling on West Broadway. (Photo courtesy of Scott Thompson) (Photo: Submitted)

The borough had tried to argue that its actions weren't causing harm to the couple's building, but Court of Common Pleas Judge Christopher Menges ruled in ArthurLee's favor, pointing out that, under state law, a subject is liable to another for trespass regardless of whether the trespass causes harm.

The vote to use eminent domain came just weeks ahead a scheduled Jan. 17 hearing for relief in the trespass suit.

The ordinance now allows the borough to "transmit soil load surcharges of a parking lot onto lands of ArthurLee."

Eminent domain code would require the borough to pay the Thompsons fair compensation, plus damages.

Maneuvering: Horne said he was disappointed by the vote.

"We're losing in court more than once to Mr. Thompson and now all of a sudden we came up with this maneuver to run around the court system," he said. 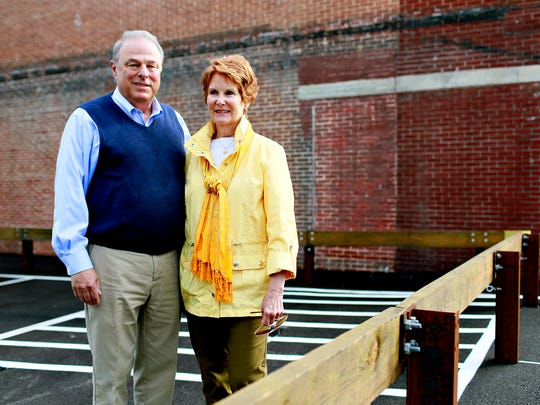 Scott Thompson, left, and his wife, Sandra Graham, owners of the Zarfos Furniture building, are shown in the parking lot, built by the borough, which is adjacent to their property in Red Lion, Wednesday, May 31, 2017. The couple recently won a lawsuit against the borough, for essentially using their building as a retaining wall for the lot, with the court ruling the act as trespassing. Dawn J. Sagert photo (Photo: The York Dispatch)

According to borough solicitor Michael Craley, an old white building that had fallen into disrepair stood next to the former Zarfos furniture store, and the borough decided to buy it two years ago.

Addressing the council before the vote, Thompson disputed Craley's account.

"You were mistaken when you said there was a building up against (Zarfos)," he said. "They never touched. They were between a foot and a foot and a half apart."

Thompson also alleged the borough "commenced the parking lot without a plan, specifications or a building permit."

Musso denied this claim when reached by phone Friday evening.

Thompson claimed the borough had "about a half a million pounds of dirt" that was pushed up against the wall of his 112-year-old building.

"They used our building as a retaining wall," Thompson said.

He said he asked the borough to stop, but the work continued.

Trespassing: Although the judge ruled the borough trespassed on the Thompson's property, Craley said using eminent domain would avoid litigation that might require the borough to remove the lot.

Removing any portion of the lot and building a retaining wall would cost the borough hundreds of thousands of dollars, Musso alleged, when reached by phone Friday evening.

Craley emphasized there would be no interference from the borough with ArthurLee's building. The eminent domain would be "strictly to allow the parking lot and any weight from that parking lot to be against the building."

He said the borough would at some point determine the legal damages, "if any," for the difference in value between the building before and after the lot's construction — which the borough would be required to pay. 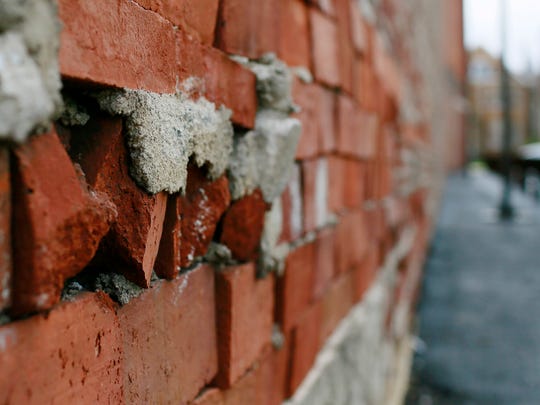 The Zarfos Furniture building is shown next to a parking lot, built by the borough, which is adjacent to their property in Red Lion, Wednesday, May 31, 2017. Zarfos building owners Scott Thompson and Sandra Graham recently won a lawsuit against the borough, for essentially using their building as a retaining wall for the lot, with the court ruling the act as trespassing. Dawn J. Sagert photo (Photo: The York Dispatch)

Several Red Lion residents at the meeting spoke out against the use of eminent domain.

"According to the law, it favors the borough, but what about the emotional aspect of this law?" resident Gary LaTulippe asked. "This is an awful thing that you are doing to our community."

Even though the law is on the borough's side, Horne said he doesn't think eminent domain is necessary.