Registrations jumped substantially, this year, Jackson said, thanks to the continued rise of social media.

The event has steadily grown in numbers, according to Bill Jackson, a member of the North York Borough Council and the borough's recreation committee, which organizes the event.

Registrations jumped substantially, from 76 children and their families in 2016 to more than 125 this year, said Jackson, who credited much of the rise to better communication through social media.

‘A Christmas Carol’ on stage

STROHECKER: Some takeaways from opening weekend of York-Adams basketball action

Danielle Snyder, of North York, said she found out about the event through Facebook.

She's now brought her son Landyn Yeaple, 3, and daughter Gracie Snyder, 8, for the past three years and said, as she lives in the borough, she will continue to attend the event.

"It's a nice little get together," she said.

The recreation committee's mission is to serve the community in the most effective way possible, Jackson said, and for this community, it's grounded in the children. 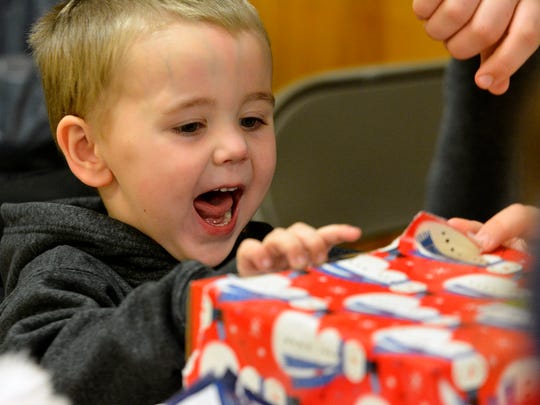 The committee holds several gatherings for its younger borough residents, including an Easter egg hunt, a Fourth of July celebration and a Halloween party, among other events.

For the Christmas celebration, recreation committee members use funds raised in large part through fundraisers to get presents for children.

Jackson said the committee members are especially mindful of how they spend the donations.

"We shop to get the best (rock) bottom deals," Jackson said.

Melissa Hoover, also of North York, said the gift-giving is especially great for some in the community who need it most.

"Some kids in this borough don't get a whole lot, so this is special for them," said Hoover, whose husband, Martin Hoover, is a firefighter with Liberty Fire Co.

Jackson said at the end of each Christmas party, they assess how many leftover presents they have and decide whether to keep them for next year or donate them to Re-Source York, an enterprise arm of York City-based mental health organization Bell Socialization Services.