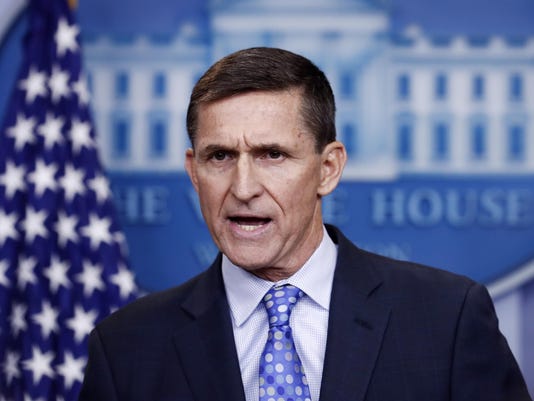 CORRECTS MICHAEL FLYNN WAS FIRED AND NOT DONALD TRUMP - FILE - In this Feb. 1, 2017 file photo, National Security Adviser Michael Flynn speaks during the daily news briefing at the White House, in Washington. Court documents released Friday revealed that Flynn planned to plead guilty to a single count of âknowingly and willinglyâ making false statements to the FBI during his short stint as Trumpâs national security adviser. Flynn was fired last February after he misled Vice President Mike Pence and other senior officials about his contacts with Russian intermediaries. (AP Photo/Carolyn Kaster)(Photo: Carolyn Kaster / AP)

WASHINGTON – Lobbing new criticism at the special counsel’s Russia investigation, President Donald Trump said Monday he feels “very badly” for former national security adviser Michael Flynn, who last week pleaded guilty to lying to the FBI about reaching out to the Russians on the president’s behalf.

“I think it’s a shame,” Trump said of Flynn’s situation, adding that it’s “very unfair” and that Flynn had “led a very strong life.”

Trump tried to contrast Flynn’s treatment with that of his Democratic presidential rival, Hillary Clinton, who he said “lied many times to the FBI and nothing happened.”

“Flynn lied and they destroyed his life,” Trump said.

The FBI didn’t conclude that Clinton lied to agents, however. Former FBI Director James Comey testified last year that agents found Clinton to be truthful in her interview, telling a House committee, “We have no basis to conclude she lied to the FBI.”

Russian ties: Even as Trump sought to minimize Flynn’s misdeeds, the Kremlin insisted that Flynn’s conversations with the Russian ambassador to the U.S. had not influenced Russian President Vladimir Putin’s response to sanctions imposed by Trump’s predecessor.

Flynn was forced to resign in February following reports that Obama administration officials had informed Trump’s team that Flynn had discussed sanctions with Russian Ambassador Sergei Kislyak, a fact at odds with the public assertions of Vice President Mike Pence. Putin spokesman Dmitry Peskov said Monday it was “absurd” to suggest that the phone conversation could have influenced Putin’s decision and added that “such requests couldn’t have been passed on” to him.

Trump, who spoke to reporters Monday as he left the White House to head to Utah, unleashed a string of tweets over the weekend in which he criticized the FBI and raised questions about the federal investigation into Russian election meddling and possible ties to his campaign.

In one of his messages, Trump again denied that he directed Comey to stop investigating Flynn.

Trump questioned the direction of the federal law enforcement agency and wrote that after Comey, whom Trump fired in May, the FBI’s reputation is “in Tatters — worst in History!” He vowed to “bring it back to greatness.” The president also retweeted a post saying new FBI Director Chris Wray “needs to clean house.”

Eric Holder, a U.S. attorney general under President Barack Obama, tweeted in response: “Nope. Not letting this go. The FBI’s reputation is not in “tatters”. It’s composed of the same dedicated men and women who have always worked there and who do a great, apolitical job. You’ll find integrity and honesty at FBI headquarters and not at 1600 Penn Ave right now.”

Trump seized on reports that a veteran FBI counterintelligence agent was removed from Mueller’s team last summer after the discovery of an exchange of text messages that were viewed as potentially anti-Trump. The agent, Peter Strzok, had also worked on the investigation of Clinton’s use of a private email server.

Peter Carr, a spokesman for Mueller, said Mueller removed Strzok from the team “immediately upon learning of the allegations.” He would not elaborate on the nature of the accusations.

Strzok’s removal almost certainly reflected a desire to insulate the investigators from any claims of political bias or favoritism. Trump and many of his supporters have at times sought to discredit the integrity of the investigation, in part by claiming a close relationship between Mueller and Comey and by pointing to political contributions to Democrats made by some lawyers on the team.

Following the tweets, Sen. Lindsey Graham, R-S.C., warned the president to tread cautiously. “You tweet and comment regarding ongoing criminal investigations at your own peril. I’d be careful if I were you, Mr. President. I’d watch this,” Graham said.

On Saturday, Trump tweeted that he “had to fire General Flynn because he lied to the Vice President and the FBI. He has pled guilty to those lies. It is a shame because his actions during the transition were lawful. There was nothing to hide!”

The tweet suggested that Trump was aware when the White House dismissed Flynn on Feb. 13 that he had lied to the FBI, which had interviewed him weeks earlier. Comey has said Trump the following day brought up the Flynn investigation in private at the White House and told him he hoped he could “let this go.”

With questions raised by the tweet, Trump associates tried to put distance between the president and the tweet. Trump’s personal lawyer John Dowd told ABC News that he drafted the tweet and gave it to the president’s social media director, Dan Scavino. Dowd declined to comment when reached by The Associated Press on Saturday night.

Sen. Dianne Feinstein of California, the top Democrat on the Senate Judiciary Committee, said the panel is beginning to see “the putting together of a case of obstruction of justice” against Trump.