Ten years before a York County time capsule buried in 1977 is scheduled to be opened, its contributors are yet to be found. 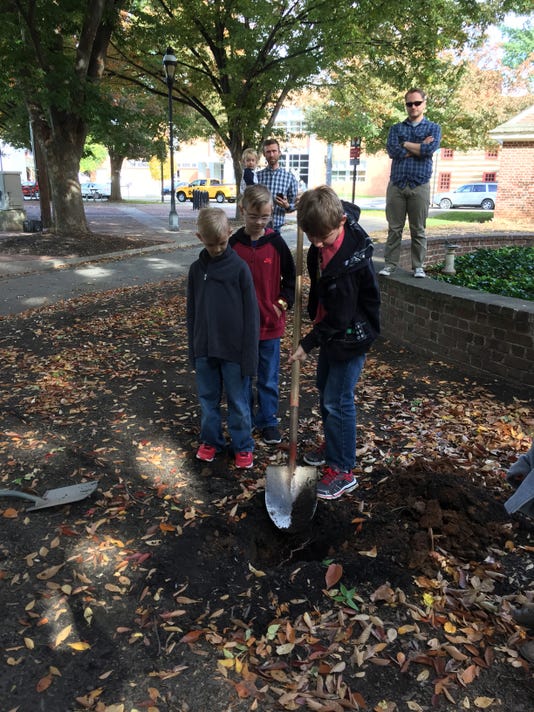 William Larrick, Ryan Larrick and Nathan Mundis search on Saturday, Nov. 4, for a York County time capsule buried in 1977. The exact location of the time capsule is unknown, and the York County Bicentennial Commission hopes to find the capsule, and the kids who contributed to it, before its slated opening in 2027.(Photo: Submitted)

Forty years ago, 47 York County kindergartners contributed to a time capsule in honor of the nation's bicentennial, and today — 10 years before they are supposed to open it — their whereabouts are unknown.

"We know about three or four," said Doug Stein, a member of the York County History Center.

But the rest are a mystery. There are no records on where the kids, who were chosen from various area schools at the time, live now, or even where exactly the time capsule is buried.

They organized a hunt for the capsule with the history center on Saturday, Nov. 4, as a way of reaching out to the bicentennial kids, while also celebrating the anniversary of the Articles of Confederation adoption, which took place in York County's original courthouse on Nov. 15, 1777.

More: Time capsule to be dedicated

The capsule is buried somewhere on the grounds of the county's Colonial Court House, which was built as a replica by the York County Bicentennial Commission in 1976.

The courthouse along Codorus Creek was modeled off of rough sketches by colonial artists, and the dimensions were determined from the four corners of the original foundation in the center of the square in downtown York, Doug Stein said.

Elizabeth Stein's father, Judge John F. Rauhauser, was the president of the commission, which also organized the time capsule burial in 1977.

In the capsule are a letter from former President Jimmy Carter, a declaration from York City Mayor John D. Krout (1974-78), handwritten letters from the children to themselves as adults, descriptions of what life would be like in 50 years, memorabilia from the bicentennial and special medallions, stamps and photos, Elizabeth Stein said.

When the capsule is opened in 2027, onlookers also will face a mannequin dressed in colonial garb, added by Rauhauser.

"He was quite a character with a great sense of humor," Elizabeth Stein said of her father, who "thought when the vault was opened there should be a person inside to greet everyone."

There is little information on where the time capsule might be buried.

Rauhauser and the superintendent of the colonial courthouse building project are no longer living, and the chairman of the time capsule committee, Ken Spawler, who was appointed by Rauhauser, does not remember its location, Doug Stein said.

Elizabeth Stein said the records got misplaced or lost over the years.

She said there was no designated office for the Bicentennial Commission, and records could have been lost as officers of the commission changed and the commission later merged with the York County Heritage Trust.

The search party used a metal detector and probe to look for the capsule. They did not find it Saturday, but Elizabeth Stein said participants enjoyed starting the hunt.

Dennis Klingensmith from Prospect Hill Cemetery shows Elijah Henning, Isaac Henning and Ryan Larrick how to use a probe on Saturday, Nov. 4, to search for the location of a time capsule buried on the grounds of the York County Colonical Courthouse. The time capsule was buried in 1977, and is scheduled to be opened in 10 years. (Photo: Submitted)

It's something that Rauhauser likely would have enjoyed.

"He loved history, he loved York County, and he loved bringing people together to celebrate, " Elizabeth Stein said.

"It is exciting to start the process of not only locating the time capsule vault, but also beginning to locate the 'kids' who are now adults that were part of this event and see what their memories are," Elizabeth Stein said.

The following children were named as contributors to the time capsule in an article by Stein:

If anyone has information to help locate these people, email YorkFirstCapital@gmail.com.