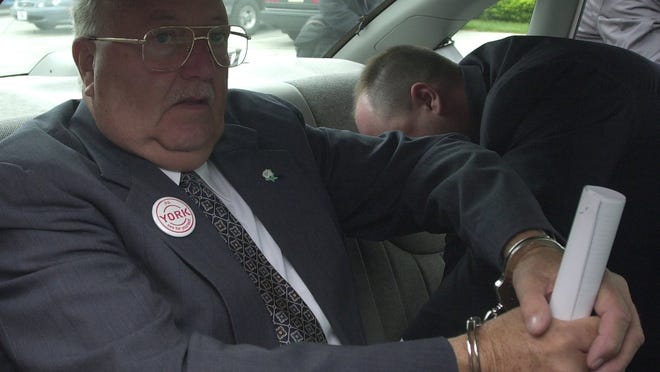 Former York City Mayor Charlie Robertson — who in 2001 was charged with homicide along with eight others for the 1969 race-riot slaying of Lillie Belle Allen — died Thursday, Aug. 24, following a battle with cancer. He was 83.

York City Mayor Kim Bracey said she is saddened by Robertson’s death, as he dedicated much of his life to public service for the city.

“His death is a sad time for everyone. The City of York appreciates his service,” Bracey said.

Murder charge: Robertson served as mayor from 1994 to 2002, when he decided not to seek re-election following his indictment in the 32-year-old homicide case.

An all-white jury found Robertson not guilty of second-degree murder charges but convicted his two co-defendants on the same charges.

Six others pleaded guilty to playing a role in Allen’s death, and some testified that they received ammunition from Robertson, a York City Police officer during the 1969 race riots. Several also testified Robertson urged them to use the ammunition to kill black people.

Robertson was the only defendant who was not accused of shooting at Allen.

Tom Kelley, who prosecuted Robertson in 2002, said he harbors no ill will toward Robertson, even though Robertson told newspapers at the time of the trial that he fantasized about killing Kelley every day.

Kelley, a former York County Common Pleas judge, said Robertson’s indictment “became an enormous distraction” for prosecutors who wanted to serve justice for the “slaughter” of Allen, a 27-year-old African-American mother of two.

“When we got involved in it, it was ‘Let’s right a wrong that should’ve been righted long ago.' When Charlie got involved, it became everything else,” Kelley said, noting how the trial became the center of national, international and political attention.

Robertson was charged with murder because the statute of limitations had expired on all other potential crimes related to Allen’s death. Had he gone to trial shortly after the 1969 riots, he likely would have been convicted of other crimes, Kelley said.

“I just wish he would’ve apologized to the (Allen) family, at the very least, for creating a situation where these kids thought what they were doing was right,” Kelley said, referring to those Robertson supplied with ammunition.

Tainted legacy: Responding in 2004 to a federal lawsuit filed by Allen’s family, Robertson admitted shouting “white power” at a gathering of gang members the day before Allen’s murder, but he insisted he ordered the shooters to stop firing at Allen’s car the day she died.

Despite Robertson’s tainted legacy, former Mayor John Brenner, who worked under Robertson as city controller before replacing him in the mayor's office, said he wanted to stay positive on the day of Robertson’s death.

“We wish his family well. It’s important for all of us to focus on the good things that he did in his life,” Brenner said.

“I think anybody that knew Charlie would say that he’s amiable, friendly — whether you loved him or didn’t think much of him — I think people would agree that Charlie loved York,” Brenner continued.

Bracey acknowledged Robertson’s reputation is now intertwined with the city’s 1969 race riots and his subsequent trial, but she said she hopes his public service will be remembered, too.

Chhayrong Chhum, whom Robertson adopted as a boy, said Robertson was a “very caring and wonderful person” dedicated to improving his community.

Chhum pointed to PeoplesBank Park and the hundreds of children Robertson coached over several decades as Robertson’s lasting legacy in the city. But “despite all the accomplishments that he was proud of,” Robertson was most proud of his family, Chhum said.