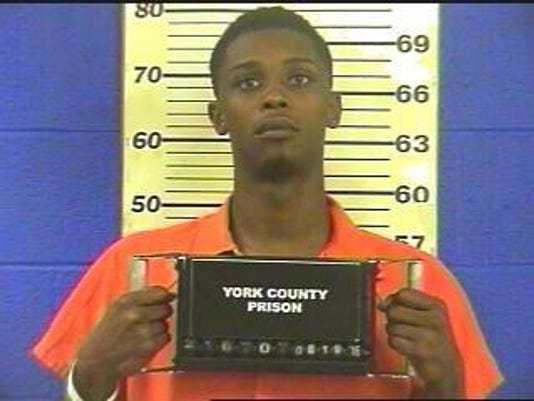 A York City man allegedly pointed a gun at a woman and robbed her in her home, according to police.

York City Police say Jamal Gregory Everett went into a home in the first block of East Jackson Street, pulled a gun on one of the residents and demanded money on Thursday, Aug. 17.

Entering home: Charging documents state that Everett was given a key to the house on Wednesday, Aug. 16, by the victim, who is acquainted with Everett.

Police say Everett then went inside the home about 3:30 a.m. Thursday, Aug. 17, and found the victim along with another woman. The two were sitting at the table having a conversation.

Everett pulled out a .40-caliber handgun and pointed it at the two women, and he then told the other woman to leave, according to court documents. Police say he walked her out the back door while he had a gun pointed at her.

Demanding money: Everett came back inside and kept asking for money, but the victim didn't cooperate with his demands, charging documents state.

He then dumped her purse on the ground and took her keys, Social Security card and phone, according to police.

Everett hit the woman on the back of her head with the butt of the gun several times and then put the gun in her face, demanding she "strip," court documents allege.

He threatened to have his friends come inside if she did not, police said.

Counting down: According to court documents, Everett put the gun in the woman's mouth and started counting down from five.

She took her shoes and socks off and gave him the $1,500 she had been saving over the past six months, police said, and she pleaded for him not to kill her.

He then said, "Ima blow you anyway dumb b—," and kept counting down, documents state.

Police say he counted to two before officers showed up outside and shined their light through the window.

Everett then told the woman that if she told police he was in the house, he would kill her, and he hid in the basement, documents state.

When police spoke with her, she lied and told them everything was OK. After officers left, Everett came back upstairs and told her "don't let me find out you called 'em," before running out of the door, police said.

Charges were filed against Everett on Monday, Aug. 21, and as of Tuesday, Aug. 22, Everett had not been arrested.