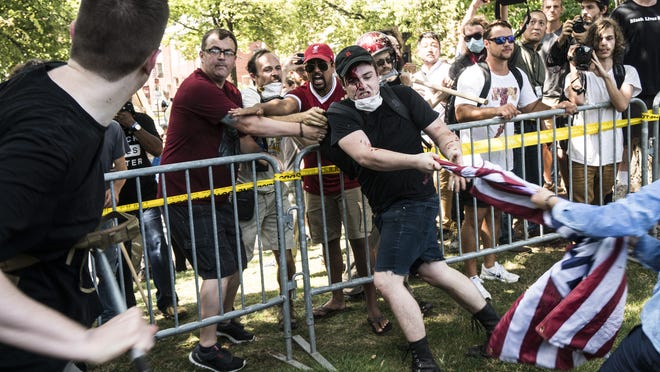 By their nature, fringe movements usually don’t find the scalding-hot center of the national spotlight. Last weekend’s “Unite the Right” rally in Virginia was an extreme — and informative — exception.

Around the nation, TV screens and social media feeds overflowed with Confederate flags, fascist symbolism and bloody images of violence as far-right groups brawled with anti-racism protesters on the streets of Charlottesville. Their white-power message was suddenly hard to ignore.

What has happened since underscores a basic principle about the far-right in the United States: Attention is a double-edged sword for white nationalists and neo-Nazis, a tool of further empowerment and an implement of their ruin.

Over the past two years, embracing the energy of Donald Trump’s presidency, far-right millennials have grown increasingly vocal on social media and at public events around the country. They’ve accumulated new followers, piled up donations and garnered profiles in mainstream media outlets.

But their rising visibility also breeds contempt. Outside the far-right, antipathy to neo-Nazis, white nationalists and other fascist figures has been building for months, sometimes giving rise to protests that boil into violent street fights.

Now, the blowback from last weekend’s high-profile chaos has spread further — into the business world, on the streets and even at home.

In recent days, several websites frequented by the far-right have been shut down and forced into silence. The Daily Stormer — the internet’s most popular neo-Nazi site and a crucial platform promoting the Charlottesville rally — has had its web hosting yanked by GoDaddy and Google, and the site had gone dark as of Tuesday.

Same for American Vanguard, a fascist group whose supporters attended the rally and which had its hosting dropped by WordPress. Gab, a social media service popular with some far-right figures, was temporarily inaccessible after its operators said it was being bombarded by a distributed denial-of-service attack by online vandals attempting to shut down the site. The anti-extremism Southern Poverty Law Center is pressuring PayPal to cut off white nationalists from its services.

Leading white nationalist Richard Spencer, who was scheduled to speak at the event, already has had a future speaking engagement canceled at Texas A&M University, and two Washington, D.C., hotels canceled his reservations as he tried to book space to hold a news conference to debrief reporters about the weekend’s rally. Instead, reporters filed into his home office to hear him talk.

“We kept getting canceled. We had to come here,” Spencer told them.

Less-extreme figures abandoned and criticized the “alt-right” movement in November after a video of Spencer receiving Nazi salutes at a conference went viral. Now, Spencer and other prominent rally figures are again under criticism from the right.

“Richard Spencer has a kill count now and blood on his hands,” former Breitbart writer Katie McHugh wrote at GotNews, a right-wing news site, alluding to the three people who died during Saturday’s clashes — one woman killed by a driver ramming a car into a crowd of counter-protesters and two state troopers monitoring the action who died when their helicopter crashed.

Another right-wing blogger, Roosh Valizadeh, wrote that Spencer “needs to do some serious soul-searching on whether he’s the man who can continue as a leader for his followers.”

Spencer denied responsibility and has blamed officials for the chaos, tweeting at Charlottesville Mayor Mike Signer: “You are responsible for allowing this chaos. Blood is on your hands.”

Last weekend’s rally also inspired the left to hold street rallies of their own around the nation in opposition. Opponents of Confederate memorials — public officials and protesters alike — have redoubled their efforts to have the symbols taken down, sometimes in dramatic fashion.

In Durham, N.C., on Monday night, a crowd of protesters used a yellow tether to yank a memorial to Confederate soldiers from its tall pedestal, and it toppled headfirst into the ground. The crowd cheered as bystanders rushed in to kick the remains. The inscription on the pedestal read, “In memory of the boys who wore the gray.”

Anti-racist internet users also have worked to identify and harass white nationalist figures who were photographed at the weekend’s events.

“Peter Cvjetanovic, a white nationalist, is upset that this photo of him has gone viral,” tweeted journalist Kurt Eichenwald, referring to an interview with a television station in which Cvjetanovic acknowledged being a white nationalist but said he wasn’t a racist. “So be nice: dont retweet this tweet 1000s of times.” Eichenwald’s tweet of a picture of Cvjetanovic has been retweeted almost 400,000 times.

One rally attendee, Cole White, quit his job at a popular Berkeley hot dog eatery after the business was inundated with complaints, according to a statement by the eatery. Another attendee, Nigel Krofta, lost his job at a commercial and industrial supplier in South Carolina. Ditto James O’Brien, who worked at a Tampa, Fla., roofing company. Under pressure, attendee James Allsup stepped down as president of the College Republicans at Washington State University.

“The tolerant peaceful liberals continue to send me & my family death threats. Please leave my family alone, this is very wrong,” tweeted a suddenly somber Tim Gionet, a popular Los Angeles-based far-right comedian who goes by the name Baked Alaska, who was scheduled to speak at the “Unite the Right” rally. Gionet thinks he may have suffered permanent eye damage after being sprayed with a chemical by counter-protesters.

Another personality who goes by the name “Millennial Matt” claimed he’d also been the subject of “thousands of thousands of death threats,” along with his family.

He exhaled. “Everything’s pretty messed up right now,” he said.

One North Dakota family went so far as to publicly ostracize their son.

“Peter Tefft, my son, is not welcome at our family gatherings any longer,” wrote Pearce Tefft in a letter published in the Forum newspaper of Fargo.

“He once joked, ‘The thing about us fascists is, it’s not that we don’t believe in freedom of speech. You can say whatever you want. We’ll just throw you in an oven,’” Tefft continued. “Peter, you will have to shovel our bodies into the oven, too. Please son, renounce the hate, accept and love all.”