As US retires from world leadership, China and Germany step up

The U.S. traditionally takes point in the search for common approaches to the big global issues of the day at G-20 summits. Not this time. When world leaders meet in Hamburg on Friday, China and Germany will move in to usurp the U.S.’s role.

As US retires from world leadership, China and Germany step up 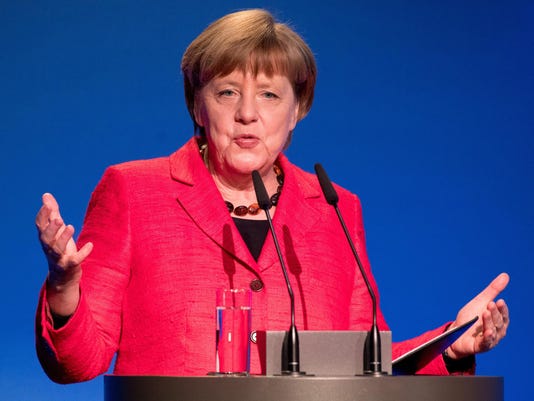 LONDON — The U.S. traditionally takes point in the search for common approaches to the big global issues of the day at G-20 summits. Not this time.

When world leaders meet in Hamburg on Friday, China and Germany will move in to usurp the U.S.’s role.

The two industrial powerhouses of Asia and Europe are being nudged into an informal alliance to pick up the leadership baton that the U.S. is accused of having dropped since President Donald Trump’s inauguration earlier this year, according to diplomats and officials from several Group of 20 members.

The situation has crystallized ahead of this year’s annual G-20 meeting, which will be held in Germany’s busiest commercial port. That’s in part because, for the first time since the group’s founding, the U.S. will be represented by a president who embraces protectionism, abandoning decades of American cheerleading for free trade.

The U.S. was also isolated on climate change at a May summit of the smaller Group of Seven club in Italy, where the final communique split 6-1 on the issue. This time, Trump risks finding himself alone against a united front of European allies, neighbors such as Canada and Mexico, and America’s former Cold War foes on the two biggest summit items.

As the previous and current hosts, China’s President Xi Jinping and Germany’s Chancellor Angela Merkel would in any case have worked together on the G-20 agenda. Yet three visits to Germany by Chinese Premier Li Keqiang to date, the latest just last month, suggest the two nations are aligned on stepping more broadly into a space that the U.S. has, at least temporarily, left vacant under Trump’s presidency.

“China and Germany’s new closeness is something that happened because of the Trump episode,” said Diego Ramiro Guelar, ambassador to Beijing for G-20 member Argentina. “The two most important leaders in the world are President Xi and Chancellor Merkel at the moment.”

Ties between China and Germany have been strengthening for years, driven by common economic interests and unobstructed by the kinds of geopolitical rivalries that were complicating relations between Beijing and Washington long before Trump’s election. Germany needs markets for its high-end industrial machinery and motor vehicles, and China wants them — so much so it bought German robotics company Kuka AG.

Xi will make his second state visit to Germany just before the summit. Two giant pandas that China will loan to the Berlin Zoo arrived already, a gesture sometimes described as panda diplomacy. China gave two pandas to the U.S. in 1972, after President Richard Nixon made his historic first visit to Communist China.

“Relations between China and Germany are at their historic best,” said Michael Clauss, Germany’s ambassador to Beijing, in a recent briefing with reporters. “The economic and political dynamic from a German perspective is moving toward the east.”

The U.S. has “left somewhat of a vacuum” in the region by abandoning the proposed 12-nation Trans-Pacific Partnership free-trade agreement, Clauss said. The deal sought to build a U.S.-centered free-trade bloc among Pacific Rim countries from Chile to Vietnam, as an alternative to more China-dominated initiatives such as One Belt One Road. Trump withdrew the U.S. from the TPP plans within a day of taking office.

The Trump vacuum is still more evident when it comes to climate change, after he announced last month that he was pulling the U.S. out of the 2015 Paris Agreement to slow global warming. The accord was signed by more than 190 countries, including all of the G-20 members.

The U.S. and China, the two biggest polluters, had formed a de facto G-2 for climate change, during the administration of former President Barack Obama. Other partners were brought in only once the big two had settled on the framework they wanted for reducing harmful emissions; neither wanted the quota-based approach favored by the European Union.

That format for climate change negotiations disappeared with Trump’s election. A new vanguard group comprising Canada, China and the EU met for the first time in May. A bilateral China-Germany working group on climate change met in Berlin last week, when each side jointly re-committed to take “an ambitious” approach to implementing Paris agreement goals, and to press that collective approach in Hamburg.

“There’s a clear recognition of our leaders that German-Chinese leadership is now needed,” said Karsten Sach, Merkel’s main climate-change sherpa for the G-20, speaking at a conference in Berlin on Friday. “Both nations are very strong exporters and in terms of the technology aspects of fighting climate change I see very strong cooperation.”

There are still significant limits to how far a Germany-China tandem can go, reflecting frustrations at what Merkel — like Trump — sees as lopsided terms of trade. Germany sold more than $85 billion worth of goods to China last year and was Europe’s largest investor in the Middle Kingdom. But it thinks those figures could be much higher, if the Chinese didn’t impose barriers that don’t exist in Europe.

In 2016, Chinese direct investment across the EU rose by 77 percent over the previous year, building on years of annual 30 percent increases, according to a study by the Rhodium Group and the Mercator Institute for China Studies. Kuka and resource recovery firm EEW Energy from Waste GmbH were among the prime targets.

Yet European investment in China fell for the fourth year in succession, with hurdles in industries such as insurance, onerous joint venture requirements and concerns over a new cybersecurity law, which some foreign investors fear could be used to disadvantage them.

China meanwhile prefers to lean on Germany rather than the EU due to wider disputes with the bloc, which continues to oppose the granting of market economy status to China at the World Trade Organization.

Merkel is aware of the dangers of allowing China to peel Germany away from the EU, creating a decidedly unequal partnership between countries that have very different political systems and few shared values. Interviewed in this week’s edition of the German business magazine Wirtschaftswoche, Merkel backed French President Emmanuel Macron’s call for EU governments to be able to do more to block foreign purchases of important companies.