About 8 p.m. each night, the sound of taps can be heard in Glen Rock.

Wednesday, April 19, 2017--Joshua Corney stands near the elevated speakers behind his Glen Rock home. The speakers amplify the playing of taps each night as a tribute to troops. The active-duty Navy sailor is at the center of a controversy as some residents object to the practice. Bill Kalina photo(Photo: The York Dispatch)Buy Photo

About 8 p.m. each night, taps can be heard playing in Glen Rock.

Resident Joshua Corney, a Lieutenant Commander in the Navy, has been doing this for nearly two years — a practice that's wearing on at least some of his neighbors.

Taps is a bugle call typically heard at military funerals and at dusk on military installations. Corney, who is  a councilman in the borough, said he plays a recording of the call over a loudspeaker to honor those in the service, past, present and future.

“I promise to play taps so that people can hear it, to remember and question," he said in a phone interview Wednesday afternoon.

The 20-year veteran is still on active duty, stationed in Maryland.

Corney said he thought if he made it home, safe and sound, from deployments in Iraq and Afghanistan, he would play taps daily.

Under fire: Now, after some complaints from residents, his routine is coming under fire.

A nearby resident complained that her husband didn't like hearing the recording, according to Corney. It plays for 57 seconds, he said.

The councilman said he's tried working with the woman and even offered to play the recording at a different time, but that wasn't satisfactory for her.

“I do understand, from their perspective," he said. However, "I feel that, at what point do I continue to compromise my right to do something for someone else’s right?” he asked.

The borough council was supposed to address the issue at Wednesday's meeting, but it was pulled from the agenda. No one discussed it during the public comment section at the beginning of the meeting, either.

Corney said he thinks some people might be trying to classify his playing of taps as being against a noise ordinance. But he said that would only apply if the music was played for about 15 minutes during that time of night. Additionally, he said, the music doesn't seem to bother many other residents. 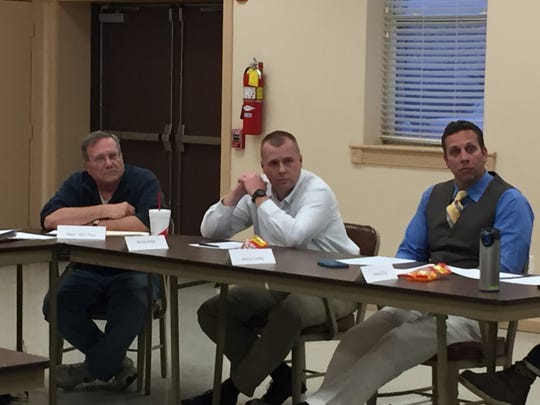 "My kids sleep through it, and it's pointed right at the back of my house," he said. "If anybody's going to wake up or be annoyed, it's going to be them."

In a Tuesday Facebook post, Corney explained why he plays taps every night. As of Thursday, that post  had been shared more than 200 times and garnered more than 115 comments, nearly all backing Corney.

“I would say that 95 percent (of people) or more have really shown their support," he said.

"This is crazy. What is this world coming to if you can't do this on your own property?" she wrote. "I can only imagine who is complaining. God bless you. I hope they let you continue."

Criticism: While the taps issue was removed from the agenda Wednesday, Councilwoman Victoria Ribeiro sent The York Dispatch a copy of the speech she was going to read.

Ribeiro wrote that she was speaking for those who are opposed to Corney's routine, noting residents are reluctant to come forward for fear of retaliation.

"I'm speaking for folks that simply want to regain the quiet enjoyment of their homes," she wrote.

There are quite a few residents opposed to the music being played, according to Ribeiro.

One complaint from October 2015 was from a resident who said Corney's playing of taps violated the borough's noise ordinance, she noted.

Ribeiro wrote that the council did not agree with that resident's request that the practice be stopped or the volume of the recording decreased because her reaction to the song made her sensitivities seem "not normal."

The council did ask Corney to turn the music down, but he only moved the speaker, according to Ribeiro.

Now, she said, more people have come forward, and she believes the music does violate the ordinance. That, she wrote, is a position different from the one she took upon hearing the original complaint in October 2015.

The ordinance, according to Ribeiro, states that a nuisance is any noise or other disturbance that occurs continuously or intermittently for an extended period of time that annoys or disturbs a reasonable person of normal sensitivities. That ordinance includes "loud playing" of devices that can be heard outside the boundaries of someone's property.

She said most of the people complaining live close to Corney's property. One, she said, has Parkinson's disease and dementia, and he and his wife believe the music playing is "aggravating his conditions."

Ribeiro said the residents wish to have a good relationship with the Corneys, and they are not trying to attack him.

Corney's music, while not "deafening," is pretty loud, she said. Corney himself admitted to that Wednesday, and at least one of his supporters on Facebook reports hearing the recording from beyond the borough's borders.

She also said because of how much it is played, it is weakening the message of the music.

On Wednesday, Corney said he would most likely keep playing the music, even if it is deemed a nuisance.

Corney said he hopes people support him in his endeavor to keep playing taps. He urged people to voice their opinion at a council meeting whenever it gets added to the agenda.

“The biggest thing here, if we want to actually get this done … people have got to be respectful, and they have got to show up," he said.

Corney said Wednesday that he wasn't sure when the issue would be placed on the agenda again. The next meeting is scheduled for 7 p.m. May 17.