TechFires 2016 robot, CrossFire, top, climbs up the castle at the end of the match for bonus points. during the Indiana Robotics Invitational last weekend. submitted photo(Photo: submitted)

York County's FIRST team, TechFire 225, had a spectacular year in the world of robotics competitions. 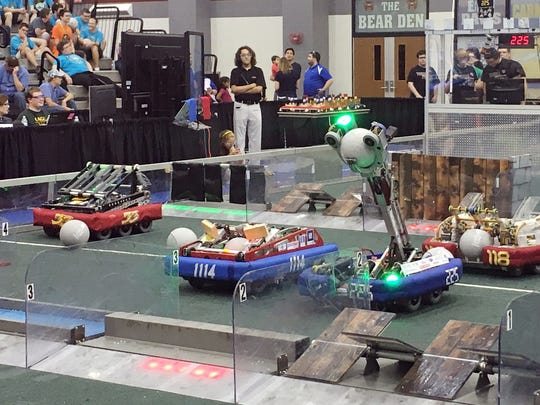 FIRST (For Inspiration and Recognition of Science and Technology) is a global organization with a focus on getting kids interested in science, technology, engineering, math (STEM) and robotics. According to its website, FIRST has more than 400,000 students who participate each year.

The competitions: TechFire 225 has 23 active students on its team from 11 different school districts in York County. The team competes year round, but the main season runs from January to April. This year, the students attended the FIRST World Championships in St. Louis in April after winning all their district events.

At the World Championship, TechFire 225 and their robot, CrossFire, placed in the top 24 teams out of 3,200, according to a press release. The challenge this year was based on a medieval theme, so TechFire 225's robot needed to breach castles, bring down other castles by shooting foam "boulders" and even climb walls.

The greatest source of pride for the team was in mid-July at the Indiana Robotics Invitational (IRI), a competition that 225 Co-Captain and robot operator Jagr Krtanjek described as the most difficult.

The IRI is by invitation only, and each year only 70 of the most successful teams are chosen. TechFire 225 has been invited for the last three years, but this year they really brought their A game. They took second place with their alliance of a number of other robotics teams.

"Getting that far in what some would say is the hardest competition in the game, it's humbling," Jagr, a sophomore at York County Day School, said.

At the IRI the alliance also broke the world record of the number of points scored in a robotics match. The original record was 275 points, but they managed to break the world record by scoring 285 points.

Michaela Bryan, a junior at Susquehanna High School and a member of the mechanical and pit teams for TechFire 225, said that she enjoyed seeing the robot change.

"It's really cool to see it on the field and see it being so successful," Bryan said. "It's crazy how it grows."

About the team: It takes a lot of work to build a robot from scratch in just six short weeks like TechFire 225 and other FIRST teams do. Adam Wolnikowski, co-captain of the team and the other robot driver, said that he spends approximately 35 to 40 hours a week working on the robot. Donnie Krtanjek the team's Lead Mentor, President of the Board for TechFire Robotics of York non-profit and Jagr's father said the hours the team puts into the robot is one of the most impressive aspects.

"It's unbelievable the amount of hours they put in and still maintain a 4.0," Donnie Krtanjek said. "We do preach that school does come first. At the shop you'll see Adam (Wolnikowski) and kids at the table doing homework before they get to the robot."

According to Kiersten Barr, a recent graduate from Eastern York and former co-captain and lead mechanical worker on TechFire 225, the robotics team gives students skills that can help them in school and future careers. Barr will be attending the Rochester Institute of Technology in the fall to pursue a degree in mechanical engineering. Her work on the team reinforced her love for engineering and her decision in her major.

"It's really useful for your future," Barr said. "You get a lot of skills that you'll use in college. Robotics has something for everyone; there's so many different positions on the team that you could be in. Even if you don't feel like you're "nerdy," there's still a place for you."

TechFire 225 is currently accepting applications for the 2017 competition season until Nov. 1. Interested students can apply by filling out an application form on TechFire's website.

"I met a lot of people that I really enjoy spending time with and am friends with now," Jagr said. "It's a good idea to join because you learn skills and meet other people."