Five people were displaced by a porch fire in York City Tuesday evening. 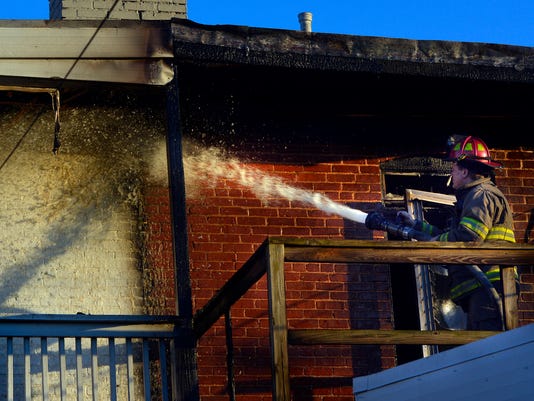 Five people were displaced by a porch fire in York City Tuesday evening.

Firefighters responded to a fire on the porch of an apartment on the 800 block of East Philadelphia Street around 6 p.m. Tuesday. The fire was caused by a discarded cigarette, according to York City Fire Chief David Michaels. No one was injured in the fire.

The five people living in the three apartments in the building were displaced as a result of the fire, according to Michaels.

"The majority of it is contained to the porch area," he said.

The fire burned an electrical cable, cutting the power to the home.

"Other than that, we could probably let them stay," Michaels said, adding that once the power is restored, the residents could live there again. The damage was estimated at $20,000, and the porch was destroyed by the fire.

The porch was heavily charred, and firefighters were still inspecting it around 6:30 p.m.

Chris Mikulka, a resident of one of the apartments in the building, was just coming back from work when he saw the fire.

"It was bad, it's burnt off," he said. He said there was one person in the home during the fire.

Michaels said the fire spread to an adjourning home, but the damage was minimal and those residents could stay in their home.

The fire could have been much worse, according to Michaels. He said one alert neighbor saw the fire and immediately let the one person inside know. That person then attempted to put the fire out himself before calling the fire department.

Michaels said firefighters were able to get the fire out in about 10 minutes.

The Red Cross is assisting those displaced in the fire.