A U.S. Capitol Police officer was shot Monday at the Capitol Visitor Center complex, and the shooter was taken into custody, Capitol officials and police said. 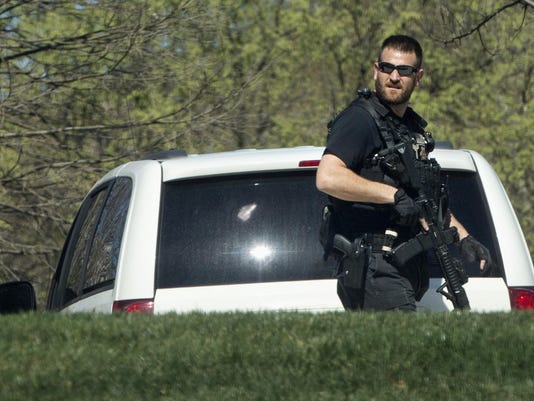 A Secret Service Police Officer patrols the North Lawn of the White House in Washington, Monday, March 28, 2016, after reports of an active shooter at the U.S. Capitol. A U.S. Capitol Police officer was shot and injured Monday, March 28, 2016, at the Capitol Complex. The officer was not seriously injured and the shooter was caught and is in custody, Capitol officials said. (AP Photo/Jacquelyn Martin)(Photo: Jacquelyn Martin / AP)

WASHINGTON — A U.S. Capitol Police officer was shot Monday at the Capitol Visitor Center complex, and the shooter was taken into custody, Capitol officials and police said.

The event unfolded with Congress on recess and lawmakers back in their districts.

It occurred in the Visitors Center of the sprawling Capitol Complex. Staffers, reporters and others were told to “shelter in place” and not allowed to leave their offices. The White House and the Capitol complex were put on lockdown.

The police officer who was shot was not believed to be seriously injured.

Capitol Police did not immediately return calls and no further information was available.