Got art to peddle or some cool knickknacks collecting dust and ready for a new home? 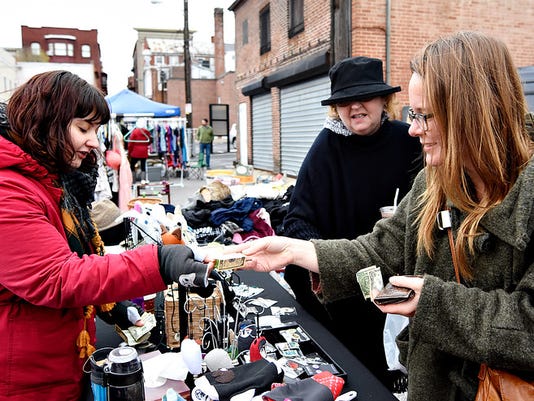 Got art to peddle or some cool knickknacks collecting dust and ready for a new home?

You may want to join York Flea for an event slated for this spring.

The first event will be 10 a.m. to 3 p.m. Saturday, May 21, in the first block of North Beaver Street, according to Kristen Evans, one of the organizers of the event, which has a  Facebook page and website.

About 20 vendors have signed up so far, ranging from people with cool collections of vintage clothes or records to artists selling things they've made or pictures they've taken, she said.

They're looking for about 30 more, and, in the future, others to sell goods at the Friday, Aug. 5, and then Saturday, Oct. 1, events, which will be similar. Vendors have to pay $30 to sell at one of the events, or $60  to sell at all three.

Evans lived in Philadelphia for a while and really liked how some bigger cities have “sort of punk-rock flea markets” — something York doesn't really have. So when she came back to York City, where she is living, she and friends Jessica Weikert and  Ariel Linebaugh decided to organize one.

So they got the 100 block of West Clarke Avenue shut down for a few hours on what turned out to be a very rainy day in October.

The rain cleared up in time for the flea market, she said, but it scared away about half the vendors, who opted to just not show up, she said. But about 500 or 600 people still came out to the event.

"It was in an alley and kind of grungy and cool," she said.

Evans works for Downtown Inc as the organization's marketing and events coordinator. This event isn't through that organization, but she said the know-how she's gained from her job has  helped her put together this event, which is the type of thing Downtown Inc does.

She said she hopes York Flea can sustain itself as a seasonal or even monthly activity, maybe moving to Sundays, encouraging people to come downtown on a day they normally might not do so.

"We’ve found people do like recurring events," she said. "You can always mark it on your calendar."