A hit-and-run driver escaped injury when she crashed her car into a Dillsburg home early Friday morning, police said.

Police said the woman who drove her car into this building on Friday, March 11, 2016, is suspected of DUI. (Photos courtesy of Michael Gorsegner, CBS21 News)(Photo: Submitted)

A hit-and-run driver escaped injury when she crashed her car into a Dillsburg home early Friday morning, police said.

The 41-year-old Monaghan Township woman was stopped a block from the scene and arrested on suspicion of drunken driving, Carroll Township Police Sgt. David Smith said.

Police were called to the home, in the 300 block of Harrisburg Pike, at 4:38 a.m. after the woman's 2009 Chevrolet Cobalt crashed into it, he said.

She was taken to the county's central booking unit on suspicion of drunken driving, according to Smith.

Charges won't be filed until results of her blood-alcohol test are obtained, he said. She was taken to the booking unit to be processed, according to Smith. 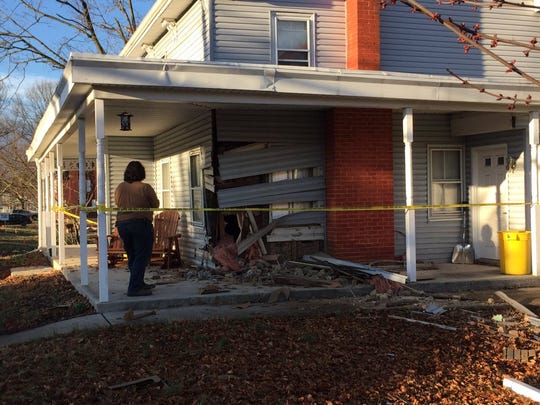 This building was damaged when a car crashed into it on Friday, March 11, 2016. (Photos courtesy of Michael Gorsegner, CBS21 News) (Photo: Submitted)

No one was hurt, the sergeant said, adding a damage estimate was not immediately available.