York City has issued a disaster declaration, banning all "nonessential" travel from the roads, according to a news release from the city. 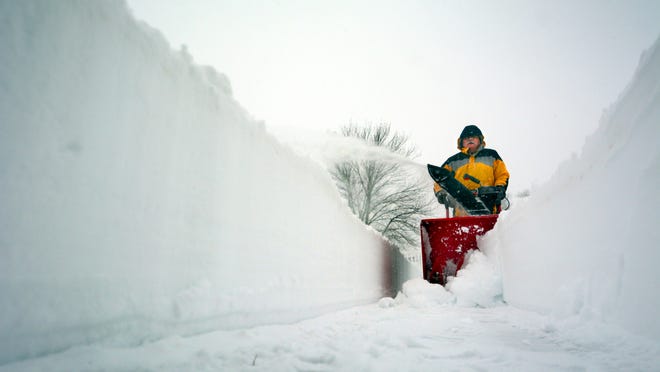 The travel ban, which started at 10 a.m. Saturday and will continue "until further notice," applies to all vehicles except emergency service vehicles, public works and public utilities vehicles, contracted snow removal contractors and health care workers, the release states.

If you're not one of those, stay off the roads, the declaration from Mayor Kim Bracey states.

York City Police Chief Wes Kahley said via text message Saturday afternoon that drivers who don't fit into those categories could be cited for disobeying the ban.

And don't abandon your cars in the middle of the road; they'll be ticketed and towed at your expense, the release states.

The snow emergency declaration remains in place, so no cars can be parked on the designated snow routes.

Shortly after noon Saturday, more people walking in the middle of the street around downtown York City outnumbered the vehicles tracing the same routes.

A couple of plows muddled past. A York City Fire & Rescue supervisor's SUV trundled south on George Street before turning left onto East King Street, headed toward the Laurel fire station at the road's intersection with South Duke Street.

With sidewalks more or less nonexistent under more than a foot of snow, the several pedestrians out just walked down the middle of the street. With the visibility low, silhouettes of pedestrians, usually walking alone or in pairs, coalesced and disappeared out of the whiteness.

Jaime Huertas and Jerry Febo were two of them. They'd just been on the first block of South George Street, shoveling out the front of the Boost Mobile store where Huertas works.

"I figured I might as well get it done now," said the very bundled-up Huertas.

He plans to come back later and give it another shovel, he said before they shuffled off down East King Street.