York City's mayor, police chief and three members of its city council gathered at a press conference Monday afternoon to decry York's recent increase in violent crime — and the growing community resistance to cooperating with police. 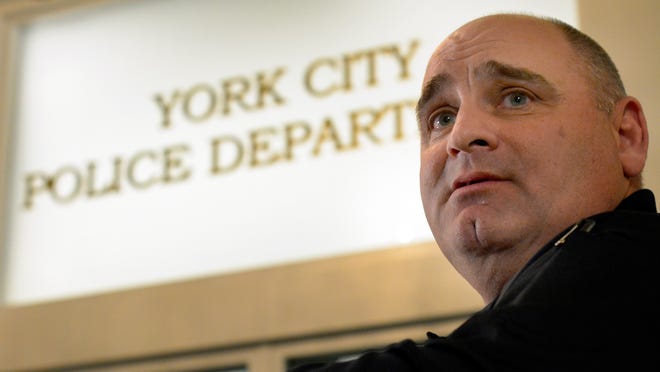 "I say to our fellow citizens, 'Enough is enough,'" York Mayor Kim Bracey said "I continue to urge our citizens to stand up and speak out."

The mayor said she's tired of the "senseless gun violence."

Sixteen people were shot in York City in December, Police Chief Wes Kahley said, a number higher than he's seen in some time.

"Although our (violent-crime) numbers were falling in recent years ... we saw a spike in the fall," he said, adding arrest warrants have been issued in some of those cases.

Many of the shootings suspects "aren't even old enough to own a weapon of any type," he said.

And many of the shooting victims have either refused to cooperate with investigators or outright lied to police, according to Kahley.

Speak up: Bracey was clearly exasperated as she called on the community to act responsibly by reporting crime and working with police.

City Councilwoman Sandie Walker, who serves as council's liaison to the police department, also said the community must work together to end violence and to keep youths in school.

Kahley said much of the recent violence is gang-related. He declined to be more specific, but did note that when one gang is taken down, others will move in to fill the void.

Southside takedown: He was referring to the massive federal prosecution of 20 purported members of the Southside gang, all of whom await sentencing. Kahley said some of them could be locked up for the rest of their lives.

But enforcement can't work by itself, according to the chief.

"Arresting our way out of this problem is not going to work," he said. "We know that's not the solution."

York City's 96 officers need members of the community to work with them, Kahley said.

"We're asking people not to lie to us when we're investigating a crime," he said. "This isn't a game."

'Proudly' dying: Bracey said some of York City's youths are, for some reason, "proudly" dying and going to prison as part of the street life they're living.

But York City and the York City School District have plenty of youth programming to help keep kids off the street and focused on their futures, officials said.

"They deserve the opportunity to achieve their goals, and to believe in themselves," Bracey said. "It's going to take all of us ... and eternal vigilance."

Their statements Monday came on the heels of a shooting this weekend that seriously wounded 18-year-old city resident Shyhiem McDowell, who was found shot about 9:50 a.m. Saturday in the back yard of a home in the 300 block of Girard Avenue.

Teen still sought: Police are still seeking 16-year-old Hydiea Banks, who is believed to be the shooter, Kahley said.

Detectives had been searching for a male seen with her, but on Monday afternoon Lt. Troy Bankert said the man had been identified and is no longer being sought.

Bankert, who supervises the city detective bureau, said investigators are still trying to establish motive in the shooting.