Seeing eagles is a rare thing. Seeing up to 100 or more in one place is even more unusual. 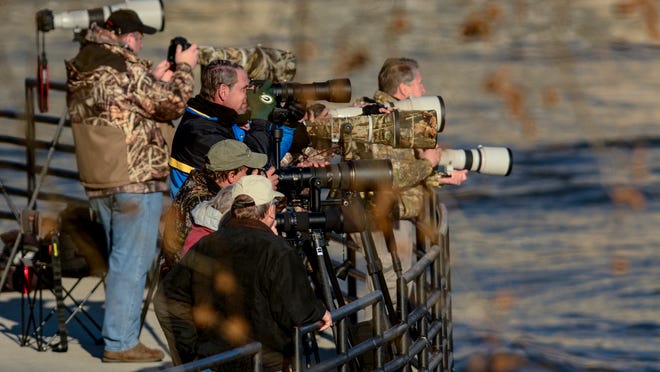 Yet, for people who visit Conowingo Dam in Darlington, Maryland, near the York County border this time of year, that is a common occurrence.

In December and January, eagles come by the hydroelectric plant in droves looking for food, drawing hundreds of bird watchers and photographers alike to the dam.

“It’s become pretty famous over the years,” said Karen Lippy, a local bird expert and member of York Audubon Society. Often times, there are so many people that it is hard to find parking, she added.

Part of the draw, Lippy said, is that the eagles are constantly interacting with each other, even fighting.

"It's just constant interaction between the birds," she said, adding that one year she saw an eagle catch a fish and eat it while in the air to ensure no other eagle got the food.

Among the bird-watchers on Saturday, Dec. 5,  was Ken Roberts, from Union, New Jersey, who traveled more than 160 miles one way to see the majestic birds at a viewing area established at 2569 Shures Landing Road.

Roberts stood near the fence at the water, with a professional camera on a tripod right near him.

He's been photographing birds for roughly a year and a half now, calling the hobby "an addiction."

Roberts said once or twice a day, sirens will go off, signaling the opening of the floodgates at the dam. That's when the eagles go for the food.

Roberts said on a good day, people can see 100 or more birds.

"It's really a phenomenal spot to see bald eagles," he said.

"Everybody should be here": Anthony Santoro was photographing the eagles Saturday evening after a 40-minute drive from his home in Newark, Delaware.

It was his first time getting up to the dam during the eagles' recent appearance, due to having a child playing soccer on weekends, although he said in the seven or eight years he has been photographing the birds, he has been to the dam around 100 times.
Santoro said he didn't even see a bald eagle until he was in his 40s.

The real estate agent and action sports photographer takes pictures of the birds as a hobby. He said there is nowhere else that will allow him to see so many eagles at once.

"To me, it's like, everybody should be here," he said.