Lori Pergament, artistic director and CEO of Greater York Dance, said she had to search far and wide to find up-and-coming dancer Dre DeShields, one of the leads in the organization's newest production. 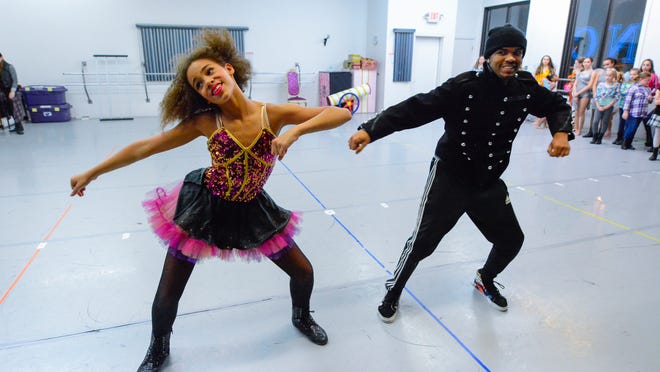 Though the 23-year-old York City native has been dancing since the age of three, DeShields had never taken classes at Greater York Dance.

But on Saturday, he will star as the "Hip Nut" in the organization's production by the same name: a contemporary, multicultural take on the classic holiday ballet "The Nutcracker."

Aspirations: "I can switch my character up a lot in dance," DeShields said.

He said his character in "The Hip Nut" is the "funny, crowd-pleasing type."

At a dress rehearsal on Wednesday night he wore sneakers, athletic pants and a military-style black jacket with a triple row of shiny buttons over a T-shirt.

In one scene, he dances by himself while a line of younger dancers in black outfits accented with orange advance behind him. He backs into the distance, the row of dancers mimicking his jerky movements.

DeShields said he's won several dance awards and regularly organizes and competes in dance battles, which can include hip-hop dance and other styles. His main style is hip-hop, but he's versatile, he said.

DeShields' goal is to be in "the next big dance movie" or TV show, and to have a "stable amount of things going on," dance-wise.

He is an instructor as well as a performer and since he got involved with the production has taught a class at Greater York Dance, he said.

Mix-up: The goal of "The Hip Nut," and one of the organization's main goals, is to unite the community, Pergament said.

She and co-choreographer Jennah Motter had the challenge of keeping the original theme of "The Nutcracker" and placing it in a modern-day setting, as well as incorporating various styles of dance, she said.

Some Lincoln Charter students will also perform in the production.

The story: The idea for "The Hip Nut" was born in 2006 when Niko Wirachman, a German exchange student who was then a senior in high school, began taking classes at Greater York Dance. Pergament said.

Wirachman's focus was hip-hop, but "he ended up in ballet and modern classes," the director said.

Using money it got from a Creative Impact Award from the Cultural Alliance, Pergament said, this past June, Greater York Dance flew Wirachman back to the States so he could help develop the production.

Multiple genres: Drummer Louis Woodyard plays his congas throughout the performance, while music is playing and during the narration between scenes. Poems read by former York City poet laureate Carla Christopher, interwoven with raps by local performer Oli Lewis, will help to tell the story.

"Hip hop culture is a celebration of life and spontaneity," Christopher said. "What do you create when you're starting with nothing?"

Because it's usually so precisely planned-out and staged, dance is normally an isolated art form, Christopher said.

"The dancers have never worked with professionals outside of the dance world before," she said. "And we haven't worked with dancers before."

The way "The Hip Nut" developed, she said, reflected the collaborative spirit of hip-hop.

Christopher's poetic narration was based on the dance, she said, and Lewis' raps came after her poetry. That's what hip-hop is all about: "people vibing off each other," she said.

"Ballet means to tell a story, so in a way we're doing a hip-hop ballet, if you want to look at it like that," Pergament said.

When winter wraps the world in a blanket of snowy sleep / resting beneath is a magical world of creeping, breathing, possibilities. You see, the holidays are the time of what should be, / even what could be if you're willing to wish / on the swish of shooting stars, leaving trails of magic / spread across a dark night sky...