Last week pope-mania struck the United States — there were T-shirts and bobble heads and pope-themed emojis and... 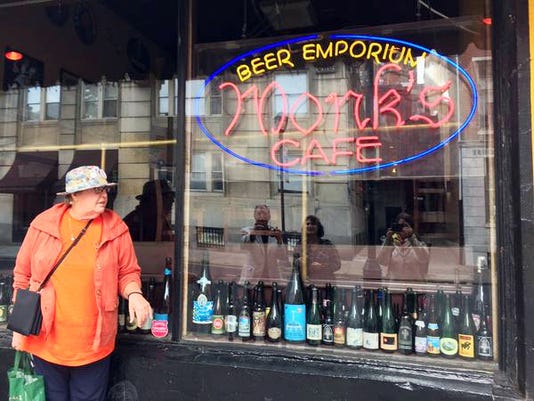 Arlette Figdore of Conewago Township is ready to see the drink specials at Monk Cafe in Philadelphia.(Photo: sara blumberg &#8212; sblumberg&#64;yorkdispatch&#46;com)

Last week pope-mania struck the United States — there were T-shirts and bobble heads and pope-themed emojis and hashtags. And on Sunday morning, nearly 100 Yorkers boarded buses bright and early to make the two-hour drive to join the sensation that was Pope Francis' first United States visit.

Most waited in line for the Mass for hours. Arlette and Phillip Figdore and their friend Britta Schwab of Conewago Township waited for four hours only to stand on tiptoe from the other side of the security check point as Pope Francis rolled by in his Jeep. They caught a glimpse of the top of his head and eventually made it through security to join the thousands of others celebrating Mass, packed together on the Benjamin Franklin Parkway on the overcast Sunday afternoon.

In spite of the long drive and even longer wait to reach the secure area where Mass was held — due most likely to the fact that there were only four metal detectors to screen thousands and thousands of people — the journey was well worth it for the pilgrims from York County.

Contrary to all the pope-craze though, it's not only about the man, Phillip Figdore said. It's about coming together and being a part of something which he called a "universal being."

The people: The line for the Mass was filled with people from all over the world; conversations between strangers, which were peppered with a variety of accents, were often cut short by excited Spanish chants translating into phrases such as "Long live the pope!" and other supportive mantras.

"Yes, it's about Pope Francis, of course," Phillip Figdore said. "It's also about the universality of fellowship."

Mass was said in three different languages: the first reading was in Spanish, the second in Vietnamese and the Gospel was in English, further illustrating the universality of the event.

"We were just so thrilled with the people we encountered," said Bernadette Bernardy of Dallastown. "We met people from Delaware, Houston, New York, everywhere, and the most beautiful part was how happy everyone was; there was just this amazing energy."

Those stuck in line made the best of being in close proximity with people who were perfect strangers.

"That was the neat thing," Bernardy said. "You didn't hesitate to talk to anyone because we were all there with the same thing in mind."

The motorcade: Excitement came quickly for those on bus No. 2, which departed from St. Joseph's Catholic Church 20 minutes behind schedule.

Some nodded off while others gabbed excitedly about the Mass, but everyone's focus shifted to the right-side bus windows when a steady stream of police cars and motorcycles passed by.

"It has to be him," said Sarah Pasquoche from Red Lion.

And surely enough, Pope Francis' Fiat zipped by the bus full of Yorkers.

Arlette Figdore, who served as the bus' captain, credited her gift of gab for the first papal sighting of the day, as it was her run down of rules mixed with her excited chatter that slightly delayed the bus' departure.

"I'm sorry I know I talk too much sometimes," she laughed. "But just imagine if hadn't, we may not have seen any of that."

High points: Pasquoche was among those who made it past security in time to catch the pope's parade.

"Just being in his presence was amazing," she said. "I started bawling as soon as I saw the cops coming around the corner.

"His smile was just infectious, and it felt just like the peace that he always preaches; there was just so much joy there."

And even though the Figdores missed Pope Francis' drive-by, they were lucky enough to receive communion, which was brought in by a parade of dozens of eucharistic ministers who were shielded by yellow umbrellas to protect the offering.

Arlette Figdore stepped aside to allow those behind her to receive the body of Christ, softly singing and with tears in her eyes.

"It was the perfect crescendo," she said. "What a beautiful and satisfying way to end the day. I remembered why I waited four hours."

Worth it: "I could wait another four hours," Phillip Figdore said after leaving the Mass, teary-eyed like his wife of 43 years.

"I would have waited 12 hours," Pasquoche said. "I've always wanted to go to Vatican City, so to be able to see the pope in my home state was an amazing opportunity. I have always felt a deep connection with the pope as a Catholic, so the chance to see him in person, well it just felt like one of those days where things just can't get better. It was a dream come true."

The long day and lengthy security process was well worth it for all who attended.

"He is just so remarkable and adventurous and amazing," Bernardy said. "Sure you wish you were closer and maybe we didn't get that encounter we all hope for, but in the end it was just a beautiful, beautiful day.