TUSCALOOSA, Ala. - Chad Kelly completed a deflected 66-yard touchdown pass and added two more long ones in the fourth... 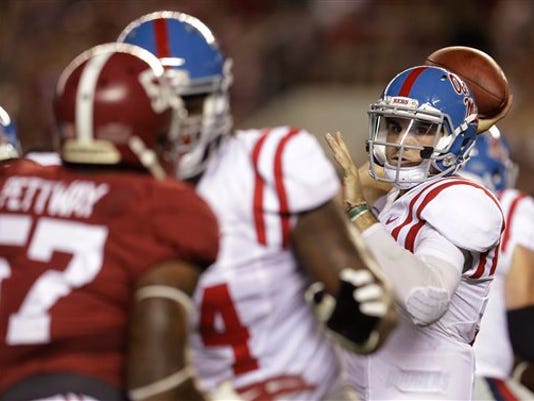 Mississippi quarterback Chad Kelly (10) passes the ball against Alabama on Saturday in Tuscaloosa, Alabama. The former Red Lion QB threw for 341 yards in the game.(Photo: BUTCH DILL &#45;&#45; The Associated Press)

TUSCALOOSA, Ala. - Chad Kelly completed a deflected 66-yard touchdown pass and added two more long ones in the fourth quarter to help No. 15 Mississippi beat No. 2 Alabama 43-37 on Saturday night.

The Rebels (3-0, 1-0 Southeastern Conference) left the topsy-turvy game with their first victory in Bryant-Denny Stadium since 1988, and second straight in a one-sided series. The Crimson Tide (2-1, 0-1) had been 25-1 in Tuscaloosa against Ole Miss and had never lost two straight.

The Rebels made two final defensive stands, the first when Tony Bridges intercepted a deep ball from Jake Coker, who came off the bench to lead a comeback from a 30-10 deficit.

Kelly delivered big play after big play after an ineffective first half, none wilder than a fling and a prayer in the third quarter, a 66-yard deflection caught by Quincy Adeboyejo for a touchdown.

Kelly, a former quarterback at Red Lion High School, finished the game 18-for-33 for 341 yards with three touchdown passes and no interceptions. He came into the game as the No. 1-rated passer in the nation.