HARRISBURG — Democratic Gov. Tom Wolf on Tuesday appeared to be in no mood to break an 11-week-old budget... 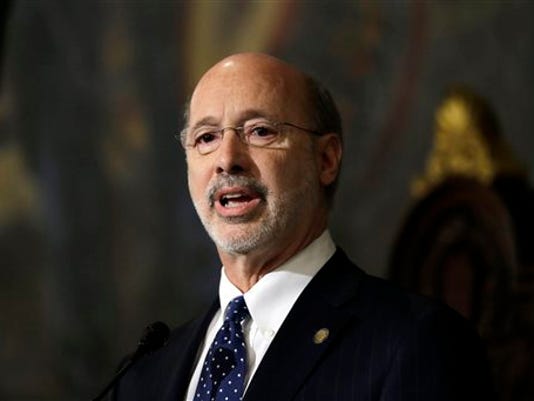 HARRISBURG — Democratic Gov. Tom Wolf on Tuesday appeared to be in no mood to break an 11-week-old budget stalemate by signing onto a short-term spending plan that Republican lawmakers are preparing to advance.

The first-term governor said during a regular appearance on Pittsburgh radio station KDKA-AM that he would sign a "reasonable" stopgap spending plan. But he went on to say that he had no date in mind by when he would feel compelled to sign a short-term spending plan to speed funding to school districts and an array of safety-net services and that he would sign such a plan only if he already had a general budget agreement with lawmakers.

"I think if we get to a point where we have a general agreement on what the budget looks like and it's going to take some time to actually get the details in place, I'd be for a stopgap there, but only in that case — not as something that's put out there as an alternative to a budget or something that's sort of a feel-good gesture," Wolf said. "This is a fight we're in, and it's a good fight, and we ought to fight it and make sure that we get to a good place for Pennsylvania, and let's not settle just for any old thing that caters to the real inconveniences that we're facing right now."

Asked if he would sign the Republicans' short-term spending plan, he said he did not know what is in it and would have to see what the details first.

Lawmakers have hardly been in session since July 1. Meanwhile, the governor's office and legislative leaders are saying little about their discussions or how they are trying to bridge their differences over tax policy, spending and the state's public pension, school funding and liquor store systems.

With the state's spending authority curtailed, Pennsylvania's school districts, counties and nonprofit social services providers are searching for ways to scrape by. They are securing bank loans, drawing on lines of credit, emptying reserves or delaying payments to vendors. Waiting lists are growing for some services, such as day services for the elderly. The Wolf administration is pledging to guarantee bank loans for any school district that needs it to make payroll.