Clerk in gay marriage fight: 'A heaven or hell decision'

MOREHEAD, Ky. — Kim Davis sat in a church pew on a Sunday morning about four years ago, listening as the man in...

Clerk in gay marriage fight: 'A heaven or hell decision' 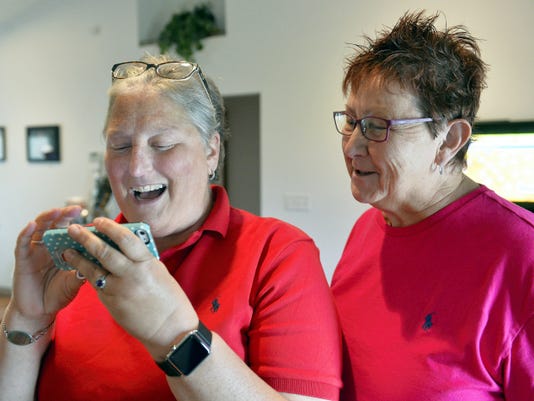 MOREHEAD, Ky. — Kim Davis sat in a church pew on a Sunday morning about four years ago, listening as the man in the pulpit preached of forgiveness and God's grace.

Davis was then an unlikely candidate to wage a moral war over the institution of marriage. At 44 years old, she had been divorced three times and had two children while she wasn't married.

But that Sunday morning, as the preacher spoke from the book of Galatians, she repented and pledged the rest of her life to the service of the Lord.

Now as the Rowan County clerk, Davis — despite her past — is refusing to surrender in a battle over who can and can't be wed. She invoked "God's authority" Tuesday as she defied a series of federal court orders and once again denied marriage licenses to same-sex couples.

Since the Supreme Court legalized gay marriage across the nation, couples have stood in her office and wept. They have shouted and called her a bigot. They have tried to reason with her.

But Davis, who usually wears a skirt that reaches her ankles and her hair to her waist, refuses to relent, even under the threat of a contempt of court charge, steep fines or jail time.

"She has found herself in a situation she never envisioned," said Mat Staver, founder of the Christian law firm Liberty Counsel that is representing Davis in her bid to refuse marriage licenses.

After the Supreme Court's landmark decision in June, Davis announced she would issue no more marriage licenses.

Four couples, two gay and two straight, sued her, arguing she must fulfill her duties as an elected official despite her personal Christian faith. U.S. District Judge David Bunning ordered her to issue the licenses, an appeals court affirmed that order, and the Supreme Court on Monday refused to intervene, leaving her no more legal options.

"It is a heaven or hell decision," she said in a statement.

Her current husband, Joe Davis, arrived at the courthouse Tuesday to check in on his wife as a protest raged on the courthouse lawn. It's been an ordeal for her, he said. People have threatened to kill her and set their house on fire.

Joe Davis, who described himself as "an old redneck hillbilly," pointed to the rainbow-clad protesters on the opposite side of the lawn.

"They want us to accept their beliefs and their ways," he said. "But they won't accept our beliefs and our ways."

He said he and his wife have been together 19 years, but declined to elaborate on how much of that time they've spent married.

Court records detail Kim Davis' turbulent marital history: She has been married to her current husband twice, with a divorce and another husband in between.

She married her first husband, Dwain Wallace, when she was 18, and divorced him in 1994.

She acknowledged in a 2008 divorce filing having had two children out of wedlock in 1994.

The next year, at 40 years old, Davis wed Thomas McIntryre, though their marriage lasted less than a year. She re-married Joe Davis in 2009.

"She made some mistakes," Staver said. "She's regretful and sorrowful. That life she led before is not the life she lives now. She asked for and received forgiveness and grace. That's why she has such a strong conscience."

On Tuesday morning, April Miller and Karen Roberts, tailed by television cameras and rival activists, were there Davis opened her office doors. They hoped Davis would accept that her fight was lost and issue the licenses.

Instead, Davis turned them away. On their way out, Miller and Roberts passed David Ermold and David Moore, 17 years a couple. "Denied again," Roberts whispered in Moore's ear.

Ermold said he almost wept. They demanded to talk to Davis, who emerged briefly on the other side of the counter.

"We're not leaving until we have a license," Ermold told her.

"Then you're going to have a long day," Davis replied. She retreated into her office, closed the door and shut the blinds as a tense standoff erupted in the office around her. Dozens from both sides of the issue packed into the lobby.

"Stand firm," Davis' supporters shouted back. They compared her to the Biblical figures Paul and Silas, imprisoned for their faith and rescued by God.

But lawyers for the rejected couples, in asking the judge to hold her in contempt of court, requested that she not be sent to jail, and instead be issued a fine "sufficiently serious and increasingly onerous" to "compel her immediate compliance without delay."

Bunning ordered Davis and her six deputy clerks to appear before him Thursday morning at the federal courthouse in Ashland.

County taxpayers pay Davis $80,000 as the elected clerk. Staver said Tuesday that she does not have a fortune squirreled away somewhere to pay whatever punishment Bunning hands down. But she also refuses to resign.