Think most women’s costume choices are sexual or infantile? You’re not wrong

The female versions – whether a police officer, a super hero or something else – are often tight, show a lot of skin and cleavage and include high heels or leather boots, sometimes fishnet stockings. Meanwhile,

Think most women’s costume choices are sexual or infantile? You’re not wrong 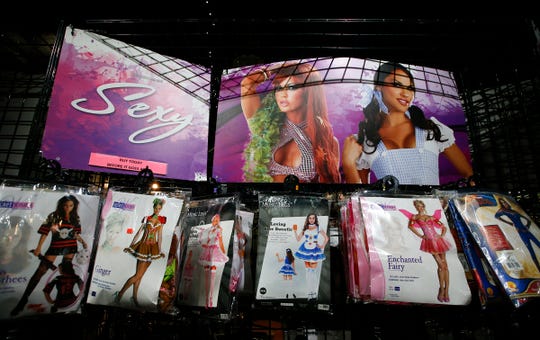 West Chester University professor Lauri Hyers and her research partners found a disturbing pattern as they looked at Halloween costumes.

The female versions – whether a police officer, a super hero or something else – are often tight, show a lot of skin and cleavage and include high heels or leather boots, sometimes fishnet stockings. Meanwhile, males tend to be fully covered, have masks or other disguises and emphasize “agency” or power, not sexiness.

At a costume store in South Philadelphia, Hyers noted that even Minnie Mouse was showing leg.

Pretty much so, says Hyers, who has studied the issue for about a decade and with the help of students and colleagues analyzed over 1,600 costumes.

“Gender targeted marketing just reinforces a gender divide and gender stereotypes and limits the potential for children and adults to imagine for themselves,” Hyers said. “It’s stifling creativity.”

And despite the #MeToo movement and increasing awareness of those identifying as non-binary, the “sexualization” and “infantilization” of female costumes seems to be increasing, she said.

Infantilization occurs when females are cast as innocent or submissive, Hyers said. It manifests in costumes through things like glitter or freckles on the cheeks, bows or barrettes, ruffles, curls and soft pastels or polka dots. Poses include the so called “bashful knee,” which Hyers pointed to on several costume packages. Descriptors such as darling or sweet are used or sometimes cutesy nicknames, like “Candy Cop.”

Both sexualization and infantilization “disempower” females by appearing to limit their value to physical attributes, she said.

There were also big differences in the amount of skin the costumes revealed and the tightness, with girls and women far outpacing men and boys.

“On a cold Halloween night, who is going to be miserable,” Hyers asked. “It’s going to be the one with the lack of covering.”

As for disguise, more than a third of men’s costumes and nearly half of boys’ included a mask, compared to 1% of women’s and under 4% of girls’.

“This research has definitely opened my eyes to a lot of these stereotypes and how women are viewed and how we view ourselves in society,” said Leigh Wolfrum, 21, a senior exercise science major from Doylestown, who is studying costumes as part of Hyers’ class this fall.

Of the costumes she reviewed, the only female one that covered almost all of the body was that of “Mary,” as in the religious figures Mary and Joseph.

“It would be cool if you saw this in men’s costumes as well,” Wolfrum said.

Hyers and Hipple agree that women have the right to wear whatever they choose, but they should have more choices. Homemade costumes is an option, too.

“Halloween is supposed to be a time when you can be whatever you want to be,” said Hipple, who got her bachelor’s and master’s in psychology at West Chester and is a doctoral candidate at Widener University. “Let kids of all genders shop in all sections of the Halloween store.”

It also would help if costumes came in all sizes for all ages and there was not “gender cued” marketing, Hyers said. Perhaps, the packages shouldn’t show males and females at all, just the costumes, she said.

Shannon Clemens, 19, a sophomore psychology major from Havertown, said she will think carefully before donning her next Halloween costume.

“I didn’t realize how many costumes I wore as a child or throughout my life that were highly sexualized or infantilized,” she said. “Going forward, I think I can make choices that better reflect me as a feminist and better reflect me in society, knowing what is imposed on women.”

“They are reinforcing a standard that women feel they have to live up to,” she said.

Masquerade at Costume Cabaret, a shop on Columbus Boulevard, has a section titled “Sexy.”

But Hyers said that even many female super hero costumes emphasize sexualization, compared to men’s.