Many analysts expect the economy to weaken next year, in part from the effects of the conflicts Trump has pursued with China, Canada, Europe and other trading partners. 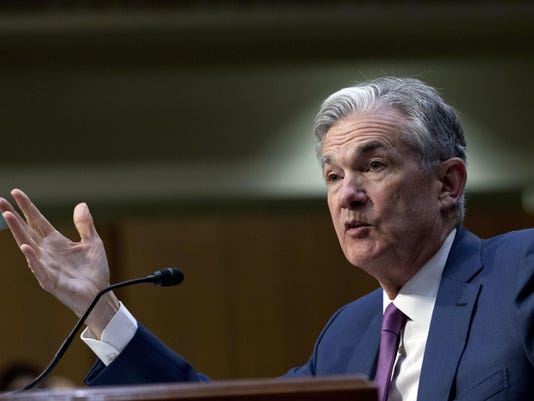 FILE- In this July 17, 2018, file photo Federal Reserve Board Chair Jerome Powell testifies before the Senate Committee on Banking, Housing, and Urban Affairs on "The Semiannual Monetary Policy Report to the Congress," at Capitol Hill in Washington. The Federal Reserve will surprise no one if it does Wednesday, Sept. 26, what itâs poised to do for a third time this year: Raise its key short-term interest rate by a modest quarter-point to help keep inflation in check, and signal that another hike is likely in December. (AP Photo/Jose Luis Magana, File)(Photo: Jose Luis Magana / AP)

WASHINGTON – The Federal Reserve is set this week to raise interest rates for a third time this year to prevent the economy from growing too fast. But with President Donald Trump’s trade fights posing a risk to the U.S. economy, the Fed may soon be ready to slow its hikes.

Many analysts expect the economy to weaken next year, in part from the effects of the conflicts Trump has pursued with China, Canada, Europe and other trading partners. The tariffs and counter-tariffs that have been imposed on imports and exports is having the effect of raising prices for key goods and supplies and potentially slowing growth.

An economic slowdown would likely lead the Fed to throttle back on its rate increases to avoid stifling growth. In that scenario, it might raise rates only twice in 2019 and then retreat to the sidelines to see how the economy fares.

Compounding the effects of the tariffs and retaliatory tariffs resulting from Trump’s trade war, other factors could slow growth next year. The benefits of tax cuts that took effect this year, along with increased government spending, for example, are widely expected to fade.

Optimism: Still, some analysts hold to a more optimistic scenario: That momentum already built up from the government’s economic stimulus will keep strengthening the job market and lowering unemployment – at 3.9 percent, already near a 50-year low. A tight employment market, in this scenario, will accelerate wages and inflation and prod the Fed to keep tightening credit to ensure that the economy doesn’t overheat.

Any light the Fed might shed on those questions could come in the statement it will make after its latest policy meeting ends Wednesday, in updated economic and rate forecasts it will issue or in a news conference that Chairman Jerome Powell will hold afterward.

The modest rate increase that’s widely expected reflects the continued strength of the U.S. economy, now in its 10th year of expansion, the second-longest such stretch on record. Most analysts also expect the Fed to signal that it plans to raise rates a fourth and final time this year, presumably in December. The Fed’s rate increases typically lead to higher rates on some consumer and business loans.

Division: Should neither Powell nor the Fed itself clarify expectations for the months ahead, it could be because the policymakers are sharply divided and are coalescing into two familiar opposing groups – “hawks” and “doves.”

Doves focus on the Fed’s mandate to maximize employment and worry less about inflation. Hawks tend to concern themselves more with the need to prevent high inflation. One Fed board member, Lael Brainard, a leading dove, earlier this month surprised some with a speech that emphasized her belief in the need for continued gradual rate hikes.

This week’s expected hike will be the Fed’s eighth since 2015, when it began tightening credit after having kept its benchmark rate at a record low for seven years beginning in 2008 at the height of the financial crisis.

Even so, the Fed’s key short-term rate, a benchmark for many consumer and business loans, remains in a relatively low range of 1.75 percent to 2 percent. By its latest reckoning, the Fed estimates its “neutral rate” – the point where it’s thought to neither stimulate nor restrain growth – at around 2.9 percent. Two more hikes this year and two in 2019 would lift the Fed’s benchmark rate to that level.

Unexpected circumstances: In her speech, Brainard suggested that the Fed might eventually see a need to exceed the neutral rate – an unexpected observation from an official who has never been seen as a hawk. But Mark Zandi, chief economist at Moody’s Analytics, said Brainard’s suggestion doesn’t seem all that surprising given the economic circumstances.

“She realizes that the economy is in a different place,” Zandi said. “We have had massive tax cuts and massive increases in government spending that were not even on the radar screen in early 2017.”

The economy, as measured by the gross domestic product, is expected to grow 3 percent for 2018 as a whole. That would mark the strongest full-year gain in 13 years. For the first nine years of the economic expansion, annual GDP growth averaged only around 2.2 percent.

The robust job market has helped make consumers, the main drivers of growth, more confident than they’ve been in nearly 18 years. Business investment is up. Americans are spending freely on cars, clothes and restaurant meals.

All the good news has helped fuel a stock market rally. Household wealth is up, too. It reached a record in the April-June quarter, although the gain is concentrated largely among the most affluent.

It’s that strength that has convinced economists that there will be little debate about raising rates this week.

“For 2018, both the economy and the stock market are sizzling,” said Sung Won Sohn, chief economist at SS Economics, a consulting firm. “That means the Fed will stay with the four rate hikes they have indicated they will make this year.”

Trump’s trade war: Next year is far less clear. Many economists worry that Trump’s combative trade policies could significantly slow the economy. Trump insists that the tariffs he is imposing on Chinese imports, to which Beijing has retaliated, are needed to force China to halt unfair trading practices. But concern is growing that China won’t change its practices, the higher tariffs on U.S. and Chinese goods will become permanent and both economies – the world’s two largest – will suffer.

Powell has so far been circumspect in reflecting on Trump’s trade war. The Fed chairman has suggested that while higher tariffs are generally harmful, they could serve a healthy purpose if they eventually force Beijing to liberalize its trade practices.

In the meantime, economists are divided over how many Fed rate increases are likely in 2019. Sohn foresees three. But Diane Swonk, chief economist at Grant Thornton, said she thinks the Fed will slow its pace to two hikes next year.

“I think the higher tariffs will start to impact the economy,” Swonk said. “But I don’t think the Fed will signal any changes in its expected pace of interest rates at this meeting. The Fed will want to wait and react to changes in the economy.”