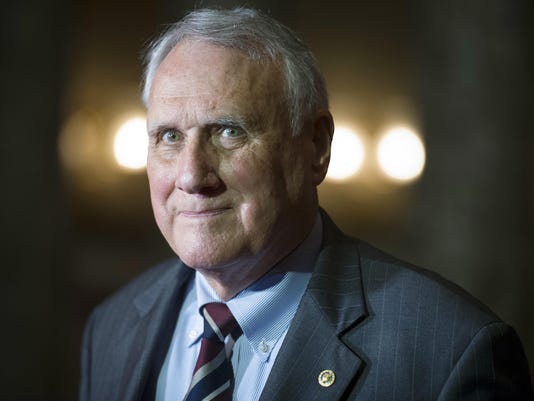 It could well be too little, too late.

“I’m not going to be asking for another vote on that this year,” No. 2 Senate GOP leader John Cornyn of Texas said last week when asked if he favored reopening the issue in a postelection lame duck session. No. 3 House leader Steve Scalise, R-La., said, “We need to win this election and then get more seats next year.” Each is their party’s chief vote counter.

That means any serious push to annul the statute would almost certainly hinge on Republicans retaining House control and adding Senate seats in November’s elections, neither of which is assured. If either goal eludes them on Election Day, President Donald Trump’s ability to deliver on one of his top campaign promises would have to wait for a second term, if he gets one.

One more vote: Republicans seemed to gain ground last week when Sen. Jon Kyl replaced McCain, who died in August from brain cancer. Kyl said in a brief interview that he would have backed the measure that McCain opposed, a pivotal vote that would have sustained the repeal drive.

“It seems to me that would have been a useful thing to do,” Kyl said.

That bill failed 51-49. A “yes” from McCain would have meant a 50-50 tie that Vice President Mike Pence could have broken by casting his own vote.

Yet the two other GOP senators who also voted no, Maine’s Susan Collins and Lisa Murkowski of Alaska, haven’t relented. With Republicans controlling the Senate 51-49, the GOP remains short of the 50 votes they’d need.

“I would still oppose outright repeal,” Collins said in a short interview last week. In a written statement, aides said Murkowski “is not interested in another rushed, partisan process in the absence of a quality, comprehensive replacement” for the law.

Senate Majority Leader Mitch McConnell, R-Ky., has ruled out revisiting the health care fight before November’s midterm elections, citing the crush of spending and other bills facing Congress. He’s displayed little desire to revisit the issue, which many Democrats are using in their election campaigns because Obama’s law is widely accepted, especially provisions like requiring insurers to cover people with pre-existing medical conditions.

Returning to the health care fight is a decision “I don’t have to reach anytime soon and don’t have time to facilitate, even if I was so inclined,” McConnell told reporters last week. He has said he doesn’t want to resume the fight unless he can win, and his House counterpart is also showing his focus is elsewhere.

“I haven’t even thought about it,” said House Speaker Paul Ryan, R-Wis.

A lame-duck session would last barely over a month and likely be absorbed with lingering budget disputes and picking the new Congress’ leaders.

The process: That would leave scant time for health care work, such as resolving intractable disputes about what a replacement bill would look like.

Then they would need an official cost estimate of any bill from the nonpartisan Congressional Budget Office, which could take weeks. They’d also have to take procedural steps to protect their bill from a Senate Democratic filibuster, which would otherwise essentially kill the measure by requiring Republicans to garner 60 votes to succeed.

“There’s still a process that we have to go through, and people have to be aware of it,” said Sen. Bill Cassidy, R-La., who opposes the health care program. “You don’t just drop it from heaven like manna.”

Explaining the diminished urgency, Cornyn cited Congress’ repeal last December of the tax penalty on people who don’t buy individual insurance. That requirement, aimed at prodding healthier people to buy coverage and stabilize health markets, was one of the law’s least popular provisions.

Also easing pressure on Republicans to act are indications that insurance premiums, a major vexation for voters, are growing more slowly.

An analysis by the consulting firm Avalere Health and The Associated Press last week found a 3.3 percent average increase in proposed or approved premiums across 47 states and Washington, D.C., for 2019. The average increase nationally this year was about 30 percent.

Meanwhile, the House plans to vote this week on a bill easing requirements the law imposed on employers. The measure would make it easier for companies to provide health insurance for fewer workers, refund tax penalties firms paid for not covering employees and postpone a levy on expensive policies companies provide workers.

Further underscoring the effort’s lack of traction, that measure seems certain never to emerge from Congress.