Patients permitted to purchase medical marijuana in Pennsylvania will be able to do so in York County for the first time on Tuesday, June 5.

Patients permitted to purchase medical marijuana in Pennsylvania will be able to do so in York County for the first time on Tuesday, June 5.

Florida-based Knox Medical will host a grand opening its first Pennsylvania dispensary, at 648 Frederick St. in Penn Township, on Monday, June 4, according to a company news release.

Patients, caregivers and members of the community are invited to attend the grand opening and tour the facility at 10 a.m. Monday, but no product will be on site until Tuesday, beginning at 11 a.m.

Normal operating hours for the dispensary will be 11 a.m.- 7 p.m. Monday-Friday and 10 a.m.- 6 p.m. Saturday and Sunday, the release states, though hours could be adjusted as needed based on inventory and availability.

“For many in York County suffering from debilitating medical conditions, the long wait is over," José J. Hidalgo, founder and CEO of Knox Medical, said in the release. "Despite sourcing and market supply concerns, our dispensary will open with great products and will be operated by a highly trained staff committed to our values of redefining excellence in the medical marijuana field." 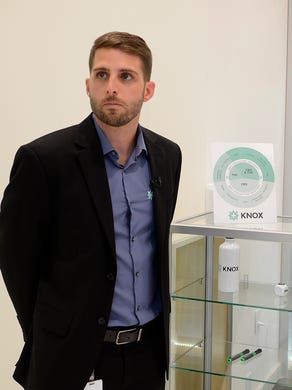 The Associated Press reported in March that Pennsylvania's medical marijuana supply was having trouble keeping up with demand because the licensed grower/processor facilities are still getting up and running.

Knox Medical was the only applicant in York County awarded a permit during the state's first round of applications, though more facilities could soon be approved.

York City-based Five-Leaf Remedies failed in its first attempt to attain a permit but has reapplied during a second round of applications and partnered with a major marijuana producer based out of Washington state to help bolster its chances.

The group is hoping to turn a warehouse at 213 E. Poplar St. in York City into a medical marijuana growing/processing facility and open a dispensary at the former South York Diner in York Township.

Chicago-based GTI lists a West Manchester Township facility on its website among its "coming soon" dispensaries, but it's unclear whether they have the permit necessary to operate a dispensary in the region.

A GTI spokeswoman responded to an email from The York Dispatch stating that the location, at the former Yorktown Pools facility, was planning to open this summer, but she did not respond to follow-up questions about the permit.