“(Donald Trump’s ascendancy to the presidency) really flicked a switch that I need to be more involved and do more to get our country back on track,” one investor said. “To me, that meant paying attention to where I put my money.” 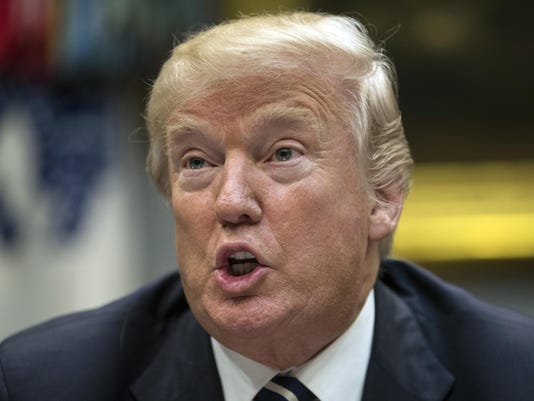 FILE - In this Thursday, Jan. 11, 2018, file photo, President Donald Trump speaks during a prison reform roundtable in the Roosevelt Room of the White House in Washington. After Trump won the White House, expectations rose that interest would wither for environmentally friendly mutual funds and other socially responsible investments. Instead, it has kept climbing as investors say they want more control over where their money is invested. (AP Photo/Carolyn Kaster, File)(Photo: Carolyn Kaster / AP)

NEW YORK — Decades after she began investing, Diana Casey for the first time put money in mutual funds that favor companies with women in corner offices and otherwise aim to invest in a socially responsible way. Her inspiration? President Donald Trump.

A 49-year-old lawyer, she was turned off when then-candidate Trump insinuated the judge overseeing a lawsuit against Trump University might be biased because of his Mexican heritage. Judge Gonzalo Curiel is based in San Diego, Casey’s hometown, and the legal community there is close. She also was saddened by comments Trump made about women, the disabled and other groups of people. After Trump captured the White House, Casey was feeling disgusted.

“It really flicked a switch that I need to be more involved and do more to get our country back on track,” Casey said. “To me, that meant paying attention to where I put my money.”

Shifting assets: Using cash that was sitting in the bank, and shifting some funds in her Individual Retirement Account, Casey reconfigured her portfolio so that she now has about a third of her investments in socially responsible funds, up from zero before Trump was elected. Those investments include a fund that holds stocks in companies where women are well represented on the board and in executive offices.

Others have made a similar move, defying predictions that a Trump White House would have a chilling effect on the socially responsible investing industry. Last year, investors plugged $6.4 billion into socially responsible mutual funds and exchange-traded funds, according to Jon Hale, head of sustainable investing research at Morningstar. That’s up 10 percent from 2016, and more than triple the rate of 2015.

The industry was already enjoying accelerating growth before Trump, and investment companies were rushing to open new funds that consider “environmental, social and governance” issues to tap into the demand. The term has become so widespread that many funds simply put “ESG” in their names for shorthand.

After Trump’s election, though, the expectation was that a Republican-led Washington would enact policies at odds with ESG funds. It would favor the coal and oil industries, for example, which would undercut profits for the renewable energy companies at the heart of many environmentally focused funds.

Instead, dollars continued to flow into socially responsible investments, and the industry launched 39 mutual funds and ETFs last year, a record, said Hale. “More and more products are out there now, and everything is poised to see ongoing growth,” he said.

Track records: Because much of the industry is so young, many funds have limited track records for measuring performance. One stereotype says that socially responsible investors need to sacrifice returns, but studies by Morningstar, Morgan Stanley and others in recent years have disputed that.

Researchers say that stocks of companies that score well on gender diversity have historically generated slightly better returns, for example. And companies with strong environmental, social and corporate-governance policies can have fewer incidents that can lead to sharp drops in stock price, such as an environmental disaster or business-practice scandal.

“I do think we’re at a moment where the whole notion of the corporation is changing,” said Joe Keefe, chief executive of Pax World Funds, which launched the country’s first socially responsible mutual fund in 1971 and now manages about $4.7 billion. “I think companies understand that customers have the expectation that the company stand for something, has values.”

Companies are increasingly taking their customers, employees and communities into consideration when making their decisions, not just their shareholders and the next quarter’s results. And Wall Street is pushing them further along that path.

The CEO of BlackRock, the world’s largest investment firm, sent a letter this month to his counterparts at the largest publicly traded companies telling them that “to prosper over time, every company must not only deliver financial performance, but also show how it makes a positive contribution to society.”

That’s what Judie Lincer, a 55-year-old naturalist educator, wanted to see when she moved about 40 percent of her investments into socially responsible funds following the election. She said she wanted her investments to be true to her goals for the environment, particularly when the White House is rolling back environmental regulations.

Lincer would have preferred to move 100 percent, but her husband, an environmental scientist, wanted to keep some money with their longtime financial adviser, who had them in traditional investments and had delivered solid returns.

Now that she’s a year into her foray in socially responsible investing, does she feel like it’s had any effect?

“I would say yes,” she said. “Of course, I’m still plagued by the really negative things that are happening, but this is one thing I feel like I have control over, and that buys some peace of mind. And I’m walking the walk: I’m doing what I can to help.”