Get ready to pay more for a new washing machine

Responding to complaints from U.S. manufacturers who said imported goods were costing them sales, Trump slapped on tariffs — 20 percent for the first 1.2 million imported washers and then 50 percent for any other washers imported in year one.

Get ready to pay more for a new washing machine 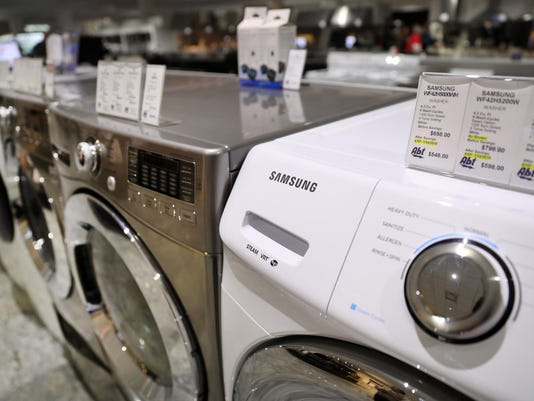 CHICAGO — At $1,899, one of the priciest washing machines for sale at Abt Electronics in Glenview, Illinois, is Samsung’s two-washers-in-one-machine Steel FlexWash. As a result of new tariffs approved by President Donald Trump on Tuesday, that price tag is about to get steeper.

Responding to complaints from U.S. manufacturers who said imported goods were costing them sales, Trump slapped on tariffs — 20 percent for the first 1.2 million imported washers and then 50 percent for any other washers imported in year one. The tariff on washers will be in effect for three years, though the tariff percentage will decline in subsequent years.

Solar cells, largely imported from China, are also being slapped with a tariff — 30 percent in the first year.

Winners and losers: The Trump administration said the move is meant to return manufacturing jobs to the U.S.

Benton Harbor, Mich.,-based Whirlpool Corp., whose 2011 petition to the Commerce Department prompted Trump’s action, said it added 200 full-time jobs at an Ohio plant in anticipation of the tariffs.

For its part, the solar-installing industry warns that up to 23,000 jobs could be lost.

The decision, will “create a crisis in a part of our economy that has been thriving, which will ultimately cost tens of thousands of hard-working blue-collar Americans their jobs,” said Abigail Ross Hopper, president and chief executive officer of the Solar Energy Industries Association, in a statement. Hopper expects the impact on solar investments to be billions of dollars.

In 2016, there were 3,718 solar workers in Illinois and 260,077 in the U.S., according to the Washington, D.C.-based Solar Foundation. Solar industry employment has nearly tripled since the first National Solar Jobs Census was released in 2010.

Shifting: The impact on consumers buying washing machines could be short-term, and buyers might just get used to it.

“It’s like any other product, if they want an LG machine, they’ll pay for it,” said Jon Abt, co-president of Abt Electronics, who said he expects consumers will see prices increase by about $50.

Once Samsung’s $380 million manufacturing facility in Newberry, South Carolina, and LG’s $250 million plant in Clarksville, Tennessee, are up and running, the impact will be lessened, Abt said. Samsung has said it has already hired 600 workers to staff the new facility.

Chris Rogers, an analyst at New York-based research firm Panjiva agreed. Rogers’ analysis shows that Samsung, LG and other foreign producers have been aggressively importing washers in the past year, so it might be a while before consumers see prices go up because of stock on hand. “LG and Samsung have a cushion on the cheaper washing machines they can sell for the next few months,” he said.

There’s no certainty that many jobs will be added if manufacturers turn to the U.S. to produce washing machines and solar cells, Panjiva’s Rogers said.

After all, it’s not clear how foreign makers such as Samsung and LG will operate their U.S. plants, he said. They could make the parts in another country and then have them assembled here in the U.S.

“If they mostly use overseas parts and assemble them using robots instead of people, the employment impact could be minimal,” he said.