The company said the moves that will affect more than a million hourly workers in the U.S. are tied to recently enacted tax legislation that will save it money. They do also reflect the tight labor market in which employers are competing for workers. 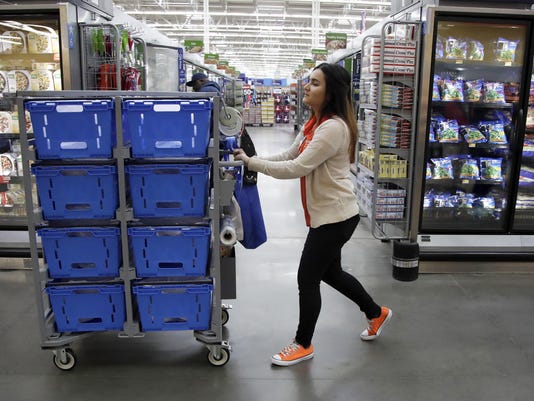 In this Thursday, Nov. 9, 2017, photo, Laila Ummelaila, a personal shopper at the Walmart store in Old Bridge, N.J., pushes a cart with bins as she shops for online shoppers. On Thursday, Jan. 11, 2018, Walmart announced it is boosting its starting salary for U.S. workers to $11 an hour, giving a one-time $1,000 cash bonus to eligible employees and expanding its maternity and parental leave benefits. (AP Photo/Julio Cortez)(Photo: Julio Cortez / AP)

NEW YORK — Walmart, the world’s largest private employer, is boosting its starting salary for U.S. workers to $11 an hour, handing out one-time cash bonuses to those who don’t benefit from the pay hike and expanding its maternity and parental leave benefits.

The company said the moves that will affect more than a million hourly workers in the U.S. are tied to recently enacted tax legislation that will save it money. They do also reflect the tight labor market in which employers are competing for workers, as both Walmart and its rival Target have been raising wages for the past few years.

“Tax reform gives us the opportunity to be more competitive globally and to accelerate plans for the U.S,” CEO Doug McMillon said Thursday. President Donald Trump cheered the announcement with a tweet, saying, “Great news, as a result of our TAX CUTS & JOBS ACT!”

Dozens of other companies have announced worker bonuses following the passage of the Republican tax plan, such as AT&T and Comcast. Large employers also have been under pressure to boost benefits for workers because unemployment rates are at historic lows, allowing job seekers to be pickier.

The nation’s unemployment rate has sat at 4.1 percent for three months now, the lowest level since 2000. The average for hourly earnings rose 2.5 percent in December from a year earlier. Still, that’s about a full percentage point lower than is typical in a healthy economy. And wages for hourly retail workers have risen less than 9 percent since 1990, compared with 18 percent for overall workers in the private sector.

Who benefits? Walmart says the wage increase benefits all hourly U.S. workers within its stores, including Sam’s Club, its website and logistics. The company had raised its starting wage to $9 an hour in 2015, and says workers could go up to $10 an hour after completing an entry-level training program. Rival Target Corp. had raised its minimum hourly wage to $11 in October, and said it would raise wages to $15 by the end of 2020.

The one-time bonus between $200 and $1,000 based will be given to Walmart employees that won’t receive a pay raise. The bonus is based on length of service, with workers with at least 20 years qualifying for $1,000. In all, Walmart employs 2.3 million people around the world, 1.5 million of which are in the U.S.

Walmart has invested $2.7 billion in higher wages and training for workers to lower turnover and make the shopping experience more appealing. It has done well and strengthened its hand in online retail as many other retailers have struggled.

The Bentonville, Arkansas-based company also promised help with adoptions, offering full-time hourly and salaried workers $5,000 per child that can be used for expenses such as adoption agency fees, translation fees and legal or court costs.

In offering the bonuses, Walmart joins companies including American Airlines, AT&T and Bank of America that have announced $1,000 worker payouts following the passage of the Republican tax plan that slashed the corporate tax rate from 35 percent to 21 percent. The companies say the bonuses they’ve announced are a way to share some of their bounty with their workers, though in some cases it’s a very small percentage of their gains.