Think you know what KitKat tastes like? Visit Japan

The country is a KitKat-lover’s paradise, with so many unique varieties — an estimated 300 — that some travelers visit Japan just to try them.

Think you know what KitKat tastes like? Visit Japan 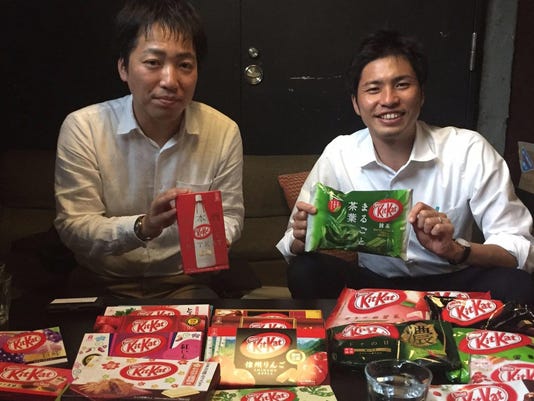 TOKYO – Two years ago, KitKat’s marketing manager in Japan won an internal corporate award. His prize: a golden trophy shaped like one of the iconic chocolate bars.

Today, the manager, Ryoji Maki, doesn’t remember why he won the award. But he’s immensely proud of what it inspired.

“That’s how I came up with creating a gold leaf-covered KitKat,” he said. Before long, the chocolate wafer bars were on sale in Tokyo for about $18. “They were like an edible golden trophy.”

Maki’s creation joined a long, and ever growing, list of distinctive, fun or just plain weird KitKats found only in Japan. The country is a KitKat-lover’s paradise, with so many unique varieties — an estimated 300 — that some travelers visit Japan just to try them.

Many flavors are alien to the American palate, and they go far beyond Japanese staples — such as sake, wasabi and green tea — and into uncharted territory: “French salt,” “college tater” and “Muscat of Alexandria.”

The 40-year-old Maki, like a Japanese Willy Wonka, has developed several varieties, such as Iwaizumi Yogurt. “It may seem as if we just want to develop weird flavors for Japanese consumers,” he said. “But the concept is really to diversify.”

Good luck: The candy with the European pedigree went on to conquer Japan thanks to constant invention – blueberry cheesecake, cherry blossom and melon — and a linguistic coincidence that makes KitKats here a harbinger of good luck.

KitKat’s history dates to the United Kingdom in 1935, when the York-based confectionery company Rowntree introduced the bar – originally called “Rowntree’s Chocolate Crisp” — as the perfect complement to a working man’s cup of tea. In 1937, the snack was renamed “Kit Kat Chocolate Crisp.”

In the 1950s, the bar arrived in Canada, South Africa, Ireland, Australia and New Zealand; in 1973, it finally made it to Japan. (The Swiss food and beverage giant Nestle acquired Rowntree in 1988. Eventually, Kit Kat became KitKat, and it is now sold in more than 100 countries. It is licensed by Hershey’s in the United States.)

Yet the story of how Japan made the snacking staple entirely its own begins in 1990, in Hokkaido, Japan’s northernmost main island, known for its skiing, hot springs and beer. KitKat’s marketing team believed the island’s souvenir shops – in fact, souvenir shops nationwide — could stand to diversify their snack offerings.

“Wherever you went, you could only find rice cakes,” said Takuya Hiramatsu, a spokesman for Nestle Japan. “But people got kind of bored with traditional rice cakes.”

The beginning: The company introduced a strawberry-flavored KitKat exclusively in Hokkaido – and after it took off, tried more limited-edition varieties. The more they introduced, the more popular the bars became. The KitKat makers leveraged local products into exotic flavors.

In time, exotic and strange KitKats began appearing all over, including on Honshu, the nation’s largest island. There, in Shizuoka prefecture, the candy-makers offered Tamaruya-Honten brand wasabi KitKats; in the Kanto region, adzuki bean sandwich KitKats; in Hiroshima, KitKats flavored like momiji manju, a locally produced pastry made of rice and buckwheat.

“I lived in Hiroshima when I was young,” Maki said. “So I knew people in Hiroshima love momiji manju so much – that it’s a soul food. I wanted to develop a business with that.”

The snacks live up to their packaging in bold, bright colors. Citrus flavors have a sharp, acidic twang; “matcha green tea” has bitter overtones; “Shinshu apple” tastes a bit like cider. The wasabi variety tames the heat in favor of flavor.

“It’s wasabi plus sweetness, which would not work at all if not (for) an amazing bit of chocolate engineering on Nestle’s part,” wrote the Snacktaku snack blog in a 2013 review. “That trademark burn has been transformed from feeling to flavor. You do not feel the heat. You taste the heat.”

Custom: Nestle gives several reasons for KitKat’s success in Japan. Giving sweets as gifts is a national custom, and the country has deep pride in its local culinary traditions and industries.

Not least, the chocolate bar’s English name is a cognate – it sounds like kitto kattsu, which means “you will surely win,” a sort of good luck blessing. Nestle leveraged the association into huge sales. In 2009, the company created “KitKat Mail,” a partnership with Japan’s postal service that allowed students to send KitKats as good luck charms before the country’s high-pressure January university entrance examination. Some KitKat wrappers contain blank spaces for students to scribble in heartwarming messages.

In March 2011, after an earthquake, tsunami and nuclear disaster devastated a swath of Japan’s Pacific coast, people sent KitKats to the region, appending the message: kitto fukkyu kanau, or, “you’ll surely recover.”

Nestle Japan threw its support behind the damaged Sanriku Railway — it released a special line of KitKats and donated some of the proceeds to reconstruction. It decorated two rail cars and in 2014, to celebrate the rail’s return to full operations, allowed riders to use some limited edition KitKats as tickets.

Growing market: Nestle says KitKat sales in Japan have risen 50 percent between 2010 and 2016, and this August the company opened its first new manufacturing plant in Japan in 26 years to keep up with local demand. The company develops 20 new flavors every year and replaces flavors on convenience store shelves every two months. “That’s how the cycle has been ever since strawberry,” Maki said.

New KitKat varieties, Maki said, take about six months to develop, from idea to shelf, which makes failures all the more disappointing. One of Maki’s greatest failures came about eight years ago – an assortment of cola- and lemonade-flavored KitKats. In 2009, “sports drink,” a citrusy concoction, also fell flat.

This August, KitKat released a “cough drop” flavor in support of a Japanese soccer team, assuming that fans would cheer till they were hoarse. Instead, the flavor left snackers, even those with scratchy throats, scratching their heads.

The store, which also sold Maki’s gold-leaf bars, once offered a limited-edition that was distinctively Japanese – sushi KitKats. No tuna, no mackerel. Just fun-sized bars with KitKats (pumpkin pudding, Hokkaido melon, raspberry) laid on puffed rice and wrapped in seaweed.