Small business owners: From Great Recession to ... getting by

Ten years after the official start of the downturn, some entrepreneurs profiled by The Associated Press as the recession began say now that they are grateful but not gleeful; they have many painful memories and lessons learned.

Small business owners: From Great Recession to ... getting by 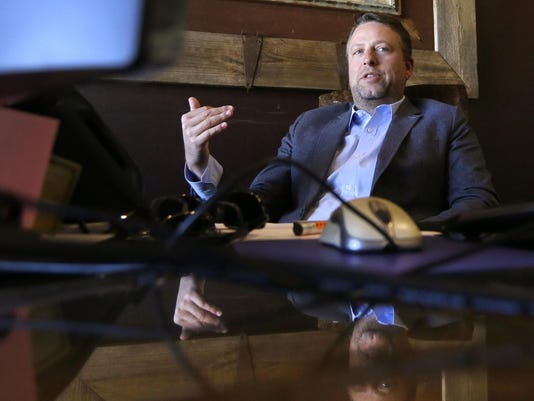 NEW YORK – They are business survivors — owners whose small companies withstood the Great Recession that forced thousands of others out of business. Along the way, many had to lay off workers, forgo salaries or find new ways to earn money.

Ten years after the official start of the downturn, some entrepreneurs profiled by The Associated Press as the recession began say now that they are grateful but not gleeful; they have many painful memories and lessons learned.

“I have to say I’m ultraconservative now,” says Jen Miller, who told the AP in early 2008 she was feeling the impact of a weaker economy on her business that sells clothing, knickknacks and other items that companies give away to clients and customers.

Recent surveys of business owners show that many have the same cautious mindset. They’re careful about hiring, borrowing much money or taking other risks, because they’re mindful that another downturn could hit.

Miller avoided laying off her two staffers at Printing and Promotional Partners in Jacksonville, Florida, but says now, “there were times when I didn’t take a paycheck.” Miller ran her company cautiously and has been able to add an employee.

“I probably could add more staff, but I never want to be in a position to let someone go if things slack off,” she says.

A look at how other owners who were interviewed for AP stories from 2006 to 2008 have fared:

NOT ALL THE WAY BACK

By 2010, revenue at Beth McRae’s public relations company had fallen 80 percent from three years earlier. Fearing she would have to lay off her five employees, she urged them all to find jobs elsewhere. They did.

“It felt like the world was coming to an end. It was devastating to have a robust business bottom out like that,” says McRae, who’s based in Phoenix, an area particularly hard-hit by the housing market collapse that helped spawn the recession.

When McRae spoke with the AP in 2007, she had begun a routine of prayer, meditation and yoga to help ease her stress. She also used credit cards to pay her bills.

Revenue started creeping higher by early 2011 as clients who had slashed their marketing budgets felt safe enough to seek publicity again. McRae was able to hire one person that year. But business is still below where it was in 2007, and she has no further plans to hire.

“I’d have to see a lot of additional revenue come in the door before I’d do that,” she says.

IN THE MIDST OF THE HOUSTING BUST

Jeremy Brandt was getting up every morning thinking about how to save his company — and whether to even try.

The housing market was already in trouble in 2006 and prices were falling. Brandt’s Dallas-based business linking real estate investors and home sellers was crashing.

“We lost 75 percent of our clients in a year. … We lost money for over 24 months,” says Brandt, the owner of the company then known as 1-800-CashOffer and now called We Buy Houses.

Brandt told the AP in October 2008 he was seeking advice from mentors and other business owners. That helped him stay in business, but eventually, Brandt had to cut his staff by three-quarters, laying off seven workers.

“You’re wondering, when do you pull the plug? Are you stupid to be rescuing a sinking ship?” he now says.

The business survived by shifting focus. With investors all but gone from the market, Brandt began working with real estate agents, charging referral fees for linking those representing buyers and sellers. He slowly built a new client base. And because so many other real estate companies had shut down, he had less competition. When the market began recovering, he had a head start on people who decided to give real estate a try again.

“I’m one of the people who has the battle scars and tells younger people how to get through every day,” Brandt says.

FINDING SUCCESS AMID THE CHAOS

One company found opportunity in the vacant retail storefronts of the recession.

Neither the recession nor its aftermath did damage, Birnhak now says, calling business “fairly consistent.”

The company began including video screens in some locations, which helped it evolve: Retailers began asking for video displays for windows and selling floors, using multiple screens and interactive features. Passers-by and shoppers can touch screens, learn more or just have fun.

That transformation — it’s now called Inwindow Interactive — allowed it to thrive even as the number of empty stores dropped.

“Instead of being a short-term type of thing, we’re doing more interactive work that is more permanent,” Birnhak says.

When he realized the economy would be struggling for a long time, Scott Gingold sold his market research firm and switched to a completely new industry.

Marketing budgets are often the first expenses businesses cut when the economy weakens. Gingold, whose business, Powerfeedback, was based in Easton, Pennsylvania, found that his contacts at client companies were afraid to spend money because it could cost them their jobs.

They “didn’t want to be the person whose boss said, ‘You just spent $25,000 for market research — how did that help us today?’” Gingold says.

When Gingold spoke with the AP in November 2008, he said his employees were all asking what they could do to help.

His revenue fell 35 percent by 2011. That year, with the aftermath of the recession still strangling business, Gingold knew that if he kept the business, he would have to lay off some of his 35 staffers.

Gingold sold the company and moved into technology. He bought Lehigh Valley Technology Co. in 2012, believing the business that provides network and server services could withstand economic hard times.

“It’s going to evolve, it’s going to change, but it’s not going to go away like market research,” he says.

Jennefer Witter’s company was still doing well when she started putting together a contingency plan.

Witter, who specialized in publicity for real estate-related companies including architectural firms, told the AP in September 2006 that while her company was successful, she was looking at her options.

She says now she began feeling the recession’s impact in 2008 as clients curtailed their spending and realized she had to do more to revamp her company, The Boreland Group. “I started going outside my comfort zone,” she says.

In 2008 she began taking on clients in a variety of industries, but steered clear of those whose fortunes were closely tied to the economy. She offered different services, like coaching sessions for startups that needed publicity but couldn’t afford a full-fledged marketing campaign. She made herself more visible, starting to give speeches in universities, community organizations, women’s groups. She’s made so many appearances that public speaking is now a side business.

“I’ve had to really work on the business consistently to make sure there were things in the pipeline,” she says.

LETTING GO OF A DREAM

Plenty of people who lost jobs were interested in learning new skills at Robert Fellman’s computer training and repair schools in southern Florida. But many couldn’t afford the tuition of $4,995 or more at PC Professor, and enrollment fell.

When Fellman spoke with the AP in 2008, he was dealing with more than revenue issues — he was worried about his employees. “There’s panic in their eyes,” he said at the time.

Fellman’s business limped along, then got a boost from a 2009 economic stimulus package that increased funding to help people get job training. “Grants and scholarships were the savior that kept us in business,” says Fellman, who estimates that a quarter of his current students receive financial aid.

As the economy improved, so did revenue. Fellman, who had locations in West Palm Beach and Boca Raton, opened a third location in Fort Lauderdale last year. But he has given up a pre-recession hope to open branches in major cities across the country.

“I don’t know if it’s part of our dream and mission anymore,” Fellman says.