Unknown to a farmer out hunting, the manufacturer of the rifle that would injure him in 2014 had received other complaints of explosions and injuries over the prior decade. 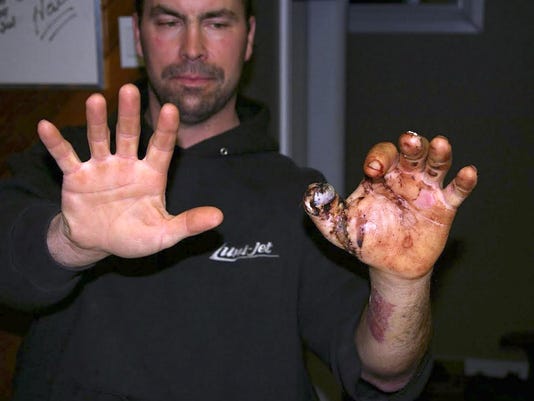 This 2010 photo provided by Trent Procter shows Procter, of Swan River, Manitoba, during rehabilitation, months after his Savage Arms stainless steel 10ML-II muzzleloader exploded and severely injured his left hand. Savage Arms recently agreed to pay a confidential settlement to Procter to resolve his lawsuit, one of several that allege the company kept a defective firearm on the market. (Gordon Harris/Trent Procter via AP)(Photo: Gordon Harris / AP)

IOWA CITY, Iowa – It was the opening day of deer hunting season, and Ronald Hansen says he loaded his rifle the same way he had countless times before, aimed at a target and fired a shot.

This time, the gun barrel exploded, knocking the farmer from Hampton, Iowa, backward, severely damaging his right hand and ear and burning his face.

Unknown to Hansen, the manufacturer of the rifle that injured him in 2014 had received other complaints of explosions and injuries over the prior decade. Customers repeatedly reported that the barrel of the stainless steel 10 ML-II muzzleloader exploded, burst, split or cracked, according to thousands of court documents reviewed by The Associated Press.

Lawyers for the company, Westfield, Massachusetts-based Savage Arms, were expected to appear Wednesday in federal court in Iowa to defend against a lawsuit filed by Hansen. He is seeking damages for his injuries, alleging the company failed to warn customers about the defect.

Several lawsuits: It’s one of several lawsuits that have claimed the company recklessly kept the muzzleloaders on the market even as they kept occasionally mangling hands, damaging hearing and burning faces. At least three have been settled on a confidential basis since last year.

Martin Crimp, a Michigan State University metals expert who examined a 10ML-II that exploded and caused a hunter to lose multiple fingers in 2009, told the AP the barrel of that gun was “metallurgically defective.”

An expert hired by Hansen’s lawyers came to a similar conclusion, saying the steel used to make the rifle was prone to catastrophic failure after repeat firings.

Anthony Pisciotti, an outside lawyer for Savage Arms, said he wasn’t authorized to comment. A spokesman for its parent company, Vista Outdoor, didn’t return messages.

Savage Arms, which discontinued the gun in 2010 after thousands were on the market, has insisted it’s safe when used properly, has no defects and was designed in accordance with industry standards.

Blaming operators: Savage Arms has argued that operator error is to blame for the explosions, saying users must have created too much pressure inside the barrel either by loading two bullets or using the wrong amount or type of gunpowder. It has issued a safety notice on its website warning owners to “carefully follow the safe loading procedures” in the product manual to avoid injuries.

Hansen’s case highlights how gun makers, unlike manufacturers of other consumer products, have the sole discretion to decide themselves whether to recall potentially dangerous weapons. In 1976, Congress blocked the newly-created Consumer Product Safety Commission, which has broad authority to regulate everything from toasters to toys and BB guns, from restricting the manufacture or sale of firearms.

“It’s an example of an industry that can essentially do whatever they want and there’s no consequences other than being held accountable in a civil liability context,” said Kristen Rand, legislative director of the Violence Policy Center in Washington D.C.

Other companies have faced allegations that they allowed unsafe guns to stay on the market. Remington agreed to replace triggers in its popular Model 700 rifles — only after several lawsuits claiming that they were prone to accidentally discharging. Ruger was accused of marketing revolvers for decades that could fire when dropped.

Settled: Savage Arms recently agreed to settle a lawsuit filed by Trent Procter, who was on a hunting trip with friends in October 2009 when the 10 ML-II he’d owned for years “just blew apart” when he shot at a target.

Procter, 48, missed nine months of work from his job as a power company lineman as he endured surgeries on his left hand and rehabilitation. He had to move to a different job and still experiences numbness due to nerve damage in his hand, where he’s missing parts of his thumb and middle finger.

Photos of Procter’s hand were shared on hunting websites after the explosion, and he said it was insulting that some suggested he and not a defective product was to blame.

“I’m surprised it was never recalled or a warning was put out that this was actually happening,” he said. “It’s quite scary when you think about it.”

Last year, the company also settled a case brought by Michigan hunter Rodney Palatka and his wife, who was pregnant with twins and suffered a miscarriage after witnessing her husband’s injuries.

James Putman of North Carolina alleges in a pending lawsuit that his Savage 10ML-II burst as he hunted last year in the George Washington National Forest, blasting his thumb off and forcing his early retirement as a firefighter.

Savage Arms started making the 10ML-II in 2001. It was designed to withstand the use of smokeless powder, which appealed to some shooters because it didn’t require the same messy cleanup as black powder.

What the company knew: The company’s knowledge of the barrel problems is becoming clear after years of lawsuits.

In Palatka’s case, a federal magistrate in 2015 sanctioned the company for a “purposeful record of obfuscation” that included falsely claiming that it was aware of only two prior explosions while withholding information that showed otherwise.

Some hunters were offered free replacement rifles after they were told their errors caused the damage.

Hansen, 50 and a lifelong hunter, testified in an August deposition that he followed the recommended procedures when he loaded his 10ML-II, which he bought in 2010 and had shot 200 times. He said he weighed and loaded 43 grains of the recommended powder and one bullet. He set a target at 50 yards, laid on a dirt pile, aimed and fired.

Hansen, who was rushed to the emergency room after the explosion, testified he still struggles to hear even with a hearing aid and cannot perform some farm chores due to his hand injury.

Savage Arms has suggested that Hansen used an improper mix of powders that caused too much pressure. Trial is set for next year.