Cannabis industry experts offered pros and cons of the potential market in Pennsylvania at a conference in Philadelphia.

Zeyead Gharib, a research and development chemist at MyDx, Inc., demonstrating the MyDx Analyzer, which provides users with a chemical profile of raw cannabis. (Photo by David Weissman)(Photo: The York Dispatch)Buy Photo

Hundreds of optimistic entrepreneurs and potential investors flooded into Philadelphia on Saturday to garner insight into the state's budding cannabis industry, but experts cautioned against overzealous ventures into a market still facing many roadblocks.

Jodie Schaefer, a Doylestown vape shop owner, said she attended the conference to learn as much as possible as she begins the process of attaining one of the state's 50 available dispensary licenses.

"I don't know why, but I'm confident I'm going to get one," said Schaefer, who added that she's already teamed up with an investor and pharmacist.

Rich Tran, an interested investor based in Montgomery County, said he and his partners have been waiting for medical marijuana to become legalized in the state for a long time.

"I just hope the law allows for plenty of investment opportunities," he said. 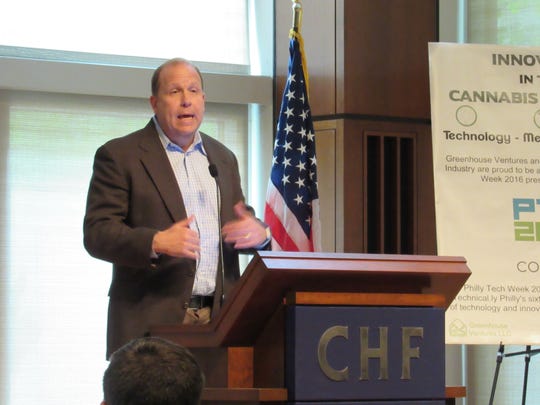 State Sen. Daylin Leach speaks to the audience at the "Innovation in the Cannabis Industry" conference on Saturday, April 30 in Philadelphia. (Photo by David Weissman) (Photo: The York Dispatch)

Leach spoke of the initial difficulties in finding public support among fellow senators and the importance of Republican Sen. Mike Folmer, who co-sponsored the final bill.

"I knew this needed bipartisan support, and as a Democrat ... I found a great partner in Mike Folmer," Leach said of the senator, whose district includes part of York County.

Leach said he believes the regulatory environment in Pennsylvania will be "very friendly" toward the medical cannabis industry moving forward.

Leach added that he doesn't plan on stopping at medical cannabis.

"I had to deny it while we were fighting to pass this legislation, but we will also push hard now for recreational," he said to loud applause from the audience.

"There are a lot of highly educated people here," he said. "It should be a strong market."

Panelists throughout the conference spoke about why the cannabis industry is set to explode but also what's holding it back. Here is a sample of some of the pros and cons discussed by some of the panels:

Greiper's firm determined that approximately 6 percent to 8 percent of money invested in cannabis-related businesses came from professional investor groups in 2014. That number jumped to as much as 18 percent in 2015, he said.

Greiper advised attendees interested in starting their own cannabis companies to pick their team very carefully.

"There are a lot of wackos in this space," he said. "Investors will run background checks on every team member, their friends and their families."

Panelist John Kagia, of Frontier Financial Group, said the West Coast has worked out some of the "kinks" in the industry, and the East Coast is "poised to take those lessons and thrive."

"In Israel, all medical marijuana is distributed by pharmacies, and I believe it will turn into something similar here," he said. "What does that mean for storefronts? It's an existential threat."

Jodie Schafer, a vape shop owner in Doylestown, listens to a panel discussing the future business outlook of cannabis in America. Schaefer said she plans on applying for a dispensary license in Pennsylvania. (Photo by David Weissman) (Photo: The York Dispatch)

"There are a lot of egos in this industry," Fitzpatrick said. "One of the first things we ask people who come to us is 'What's your exit strategy?'"

"No one believes you're going to be a billion-dollar company," Ross said. "Everything comes down to management."

Med-tech and how it can advance the industry: Pro: There's a lot of room for innovation in the medical technology market, according to panelist David Goldstein, of PotBotics.

"It's booming, but we have a lot of catching up to do to meet the needs of patients," Goldstein said.

The U.S. Drug Enforcement Administration still considers cannabis a Schedule I drug, which it describes as "no currently accepted medical use and a high potential for abuse," thus preventing high-level medical studies on the substance.

Goldstein said that reclassifying cannabis as a Schedule II drug would open up barriers currently preventing research and potentially make it possible for patients to bill their insurance. Con: Goldstein said medical technology is so far behind on cannabis that doctors and patients are forced to use a guess-and-check method to see what helps.

"Dosing is the holy grail of what we're trying to accomplish," he said. "Even if you're using the correct strain, using the wrong dosage could have adverse effects."

Panelist Zeyead Gharib, of MyDx Inc., said that patients can't know exactly what they're getting until every cannabis sample in America come with numbers.

Medical research: Pro: Panelist Michele Ross, of Impact Network, said cannabis' potential is unlike anything anything doctors have ever seen.

"We don't know enough to say cannabis cures anything, but its potential to treat a wide range of conditions has never been seen," she said. "We're probably a century or more of research away from unlocking its true potential."

Panelist Dr. Scott Gottlieb, a pain management doctor based in New York, said he hasn't had much success treating patients with neuropathic pain, which involves injuries to nerves, but those patients who he's since put on medical marijuana have experienced relief.

Con: Panelist Dr. David Casarett, of Penn Medicine, said physicians tend to be "a conservative bunch" who will likely prevent access for patients.

Casarett said he initially wrote off cannabis as an addictive substance with no medical benefits, and many of his colleagues still consider it "a joke."

"It's a challenge to convince us to recommend something without much research," he said.

Gottlieb, who has been prescribing medical cannabis to patients for nearly two years, said he attained certification through a half-hour course that made no mention of dosage.

All the panelists said they weren't taught about cannabis at all throughout medical school training.

"Until it changes from Schedule I, it's not going to be taught," Ross said.